Every spring, my best mates and I make our annual pilgrimage to the desert to attend Coachella. This year’s edition was my third event in as many years, and like the others I attended in 2009 and 2010, it was quite the epic weekend.

Here are the Top 4 Sets that made my Coachella Weekend:

My most favorite set of the entire weekend. I had been listening to dub-step for the majority of the day, and definitely needed a break from the 140-BPMs, and boy-oh-boy A-Trak, provided all that I was waiting for. Sporting his trademark fedora, A-Trak, a turn-tablist, spun everything from electro to house, disco to hip-hop. The man may as well have thrown a kitchen sink at us. It was a wonderfully varied set, and my heart leapt out of my chest when he threw out Duck Sauce’s “Barbra Streisand”, then later his “Robot Rock” juggling routine and of course, his remix to Yeah Yeah Yeahs’ “Heads Will Roll. 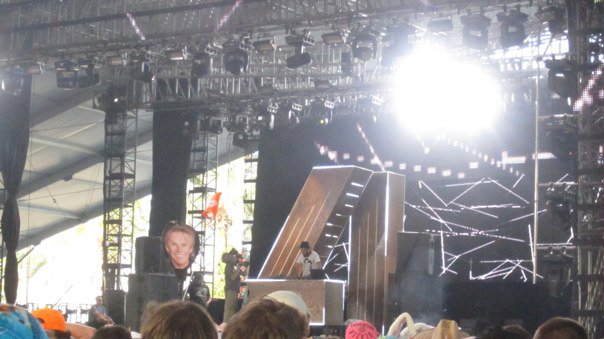 A-Trak in the Sahara Tent. (Yes, that is Gary Busey’s head on a balloon) Photo by Joey Pangilinan.

A-Trak pulled double duty at this year’s Coachella. In addition to his solo set on Friday, he and Armand Van Helden played a Duck Sauce set on Sunday evening right at dusk. Duck Sauce’s set centered mostly on the group’s bread and butter: house music with a side of funk sprinkled in here in there. Good vibes and good solid (house) music. 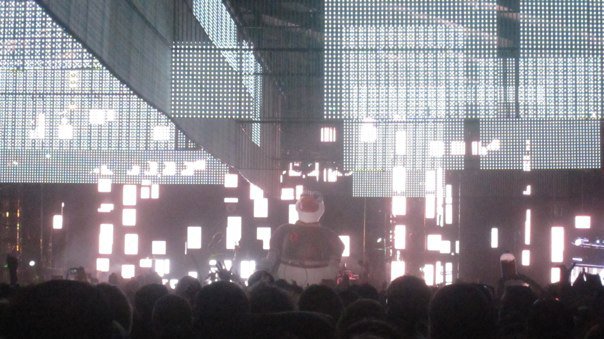 Duck Sauce in the Sahara Tent. Photo by Joey Pangilinan

While much of the festival was preoccupied with the Arcade Fire performing on the Coachella Stage on Saturday night, most of my friends and I went to see Steve Angello in the Sahara tent. As one-third of Swedish House Mafia, Angello knows how to start a party and more importantly, knows how to keep it going. He kicked off his set with SHM’s “From Miami to Ibiza”. What Angello proceeded to do next was essentially burn down the Sahara tent, because he was on fire the rest of the night with hits that were his like “Knas” or SHM’s “One” or even Justice’s remix to Simian’s “We Are Your Friends”. Angello’s set was a perfect example of a DJ feeding off the crowd and vice-versa. He knew what the crowd wanted to hear, and he gave us that and so much more. 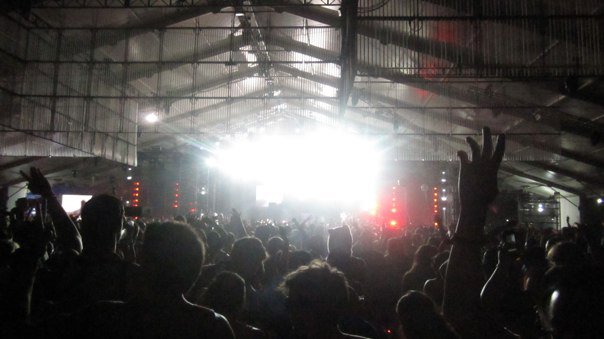 The view from the back of the Sahara Tent for Steve Angello. Photo by Joey Pangilinan.

Kanye’s festival closing set was a full on production, and an intense one at that. Structured like a Greek tragedy with three acts, Kanye’s nearly two-hour set was filled with his hits. Kanye made his entrance on a giant crane that rotated him 360 degrees. The entrance was an idea that Michael Jackson was going to use for his This Is It tour. It was a fitting tribute to the King of Pop. For the most part, Kanye delivered. But I, along with most everybody thought Kanye would bring out some blockbuster guest. Realistically, I didn’t think Kanye would bring out Daft Punk for “Stronger”, but maybe Rhianna for “All of the Lights”. Coachella is like Christmas; this is the time for surprise special guests. Obviously, Kanye, as he always does, just wanted to do things his own way. 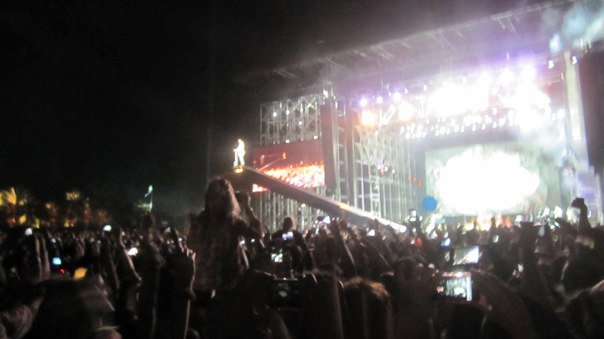 Kanye West making his entrance to the Coachella Stage. Photo by Joey Pangilinan. 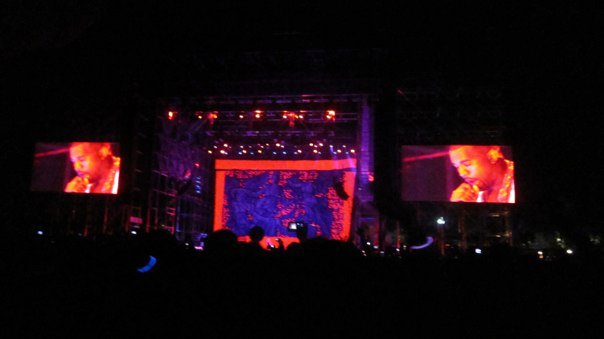 Other notable sets or portions of sets I actually got to see: Yelle, who got the Gobi tent grooving and moving every which way. Mumford & Sons and the Strokes plain and simply rocked the Coachella Stage respectively on Saturday and Sunday nights, while Chromeo brought the funk and sexy to the Outdoor Theater on Sunday evening. My musical tastes lean on almost all Electronic Dance-Music (EDM) genres, and I thank my lucky stars that more than any other large scale music festival in the United States, Coachella and their promoter Goldenvoice, has a sweet tooth for EDM as well.