Merrill Garbus stepped on stage at San Francisco’s Great American Music Hall, looking like a hybrid between a jazz lounge singer and exotic jungle bird, in a long black gown complete with fluorescent feathered sleeves and her trademark face-paint. The woman behind the highly buzzed and grammatically irritating tUnE-yArDs, Garbus, who is now based out of Oakland, beamed at selling out a prominent venue in the area she calls home, keeping a permanent grin affixed to her face throughout the evening’s performance. 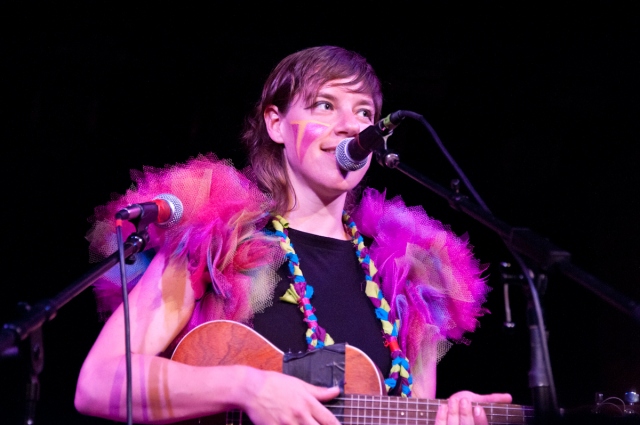 After the audience greeted Garbus with welcoming applause, she took her position in front of a single drum, microphone and looping machine, carefully building intricately-layered loops that are a crucial part of her songs. With the loops set to her liking, she went into a howl, her powerful voice asking the audience, or perhaps herself, “Do you want to live?” over and over again. While pointing her drum sticks, when not in use, at the crowd, it seemed as though she was a conductor of the audience’s enthusiasm. She evidently did possess a sort of control over the audience, as it was difficult to notice her backing musicians—Nate Brenner who regularly tours with Garbus providing bass and guitar work, as well as two saxophonists—slink onto stage. It was only with the start of her second song, “You Yes You” that these other musicians became apparent, even though the focus remained on Garbus.

While these backing instrumentalists certainly aided in recreating the heavily layered musical style portrayed on tUnE-yArDs’ studio albums, Garbus proved perfectly capable of creating a one-woman symphony through her looping adeptness. Initially the audience cheered and affectionately cat-called when she deftly created her starting loops—harmonizing with herself, forging polyrhythms and complex ukulele riffs—undoubtedly making these loops far more difficult for Garbus, who showed no sign of struggle. However, at the close of one song and after the particularly dense drone of one final loop halted, Garbus jokingly chided the audience for interfering with her looping, but also admitted to the echoing applause making her feel “like a rockstar playing an arena show,” which is essentially how Garbus held herself the entire night, with the confidence and joy of a newly minted rockstar. 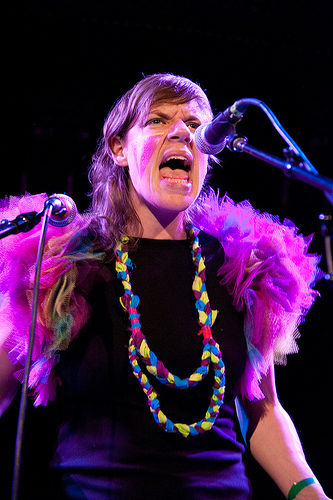 This attitude, coupled with Garbus’ evident talent, prevented the show’s costumery and backup dancers from being a gimmick meant to distract, instead acting as an added element to the tUnE-yArDs’ live experience. The backup dancers appeared to be extensions of Garbus herself, or perhaps her puppets (fittingly so, as Garbus has a background in puppetry), dressed in all black with a single fluorescent tuft of Garbus’ feathers. Dancing just as much with their faces as their bodies, they mimicked the quirky face choreography of tUnE-yArDs’ “Bizness” music video. With Garbus’ seamless shift from authoritative figure with an undeniable power behind her voice calling out “I’m a new kind of woman” in “Killa,” to her breathy, self-loathing whisper “I run over my own body with my own car” in “Es So,” the dancers followed these shifts and stage-dove onto the audience, crowd-surfing to the exit—seemingly controlled by the tone in their puppet-master voice. 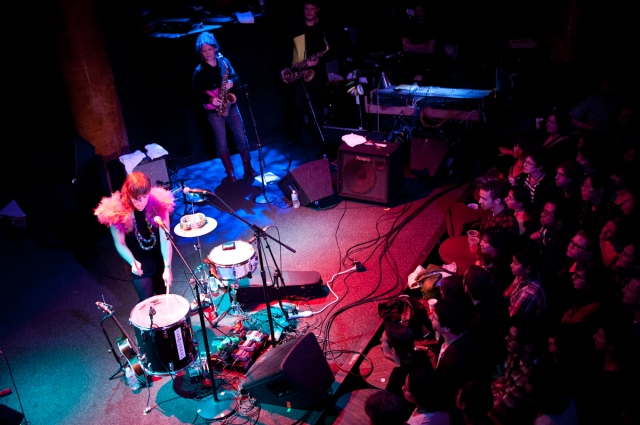 The audience seemed to be controlled by the tone in Garbus’ voice as well, jumping when she jumped, participating in call-and-response and acting as a makeshift loop device by holding an F note out when commanded to. While audience participation can often detract from the performers on stage, Garbus conducted it as though the entire venue and all of its inhabitants were part of the tUnE-yArDs musical. This stage presence and charisma only cemented Garbus as the rockstar her albums allude to, proving that her lyric “What’s a girl to do when she’ll never be a rockstar?” is obviously not in reference to herself.