It shouldn’t come as a surprise to anyone even vaguely familiar with David Bazan’s career to learn he’s still penning songs full of religious imagery and narrators struggling with their faith. What will definitely catch fans of his early work off-guard, however, is the 180 degree turn he’s taken in his personal life from strictly devout Christianity to his current status as a doubting agnostic recovering from alcoholism. It’s rare to hear a musician’s struggles, questions and changes laid-out so openly from album-to-album, and it’s this stark honesty that has made Bazan one of the more underrated songwriters working today. 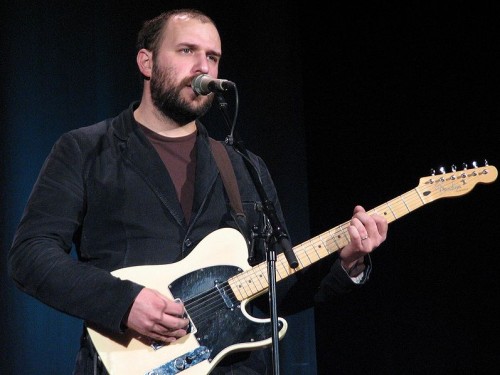 Photo by Håkan Henriksson CC BY 3.0

The son of a Pentecostal pastor, Bazan was raised in a nearly fundamentalist environment that resulted in him not hearing any sort of secular music until he was a young adult. As he grew older, the sounds coming out of his hometown of Seattle in the early 1990s sparked his passion for songwriting and led him to form Pedro the Lion, a popular project that managed to combine the disparate worlds of indie and Christian rock. The band released a half-dozen albums and EPs of lo-fi bedroom recordings and spiky indie rock before giving way to what would evolve into Bazan’s solo career.

In the few years after Pedro the Lion disbanded, Bazan became overwhelmed with the state of the world, questioning his faith and feeling as though the god he’d believed in his whole life had abandoned him. By the time his solo debut LP, Curse Your Branches, was released in 2009, the reality of Bazan’s ideological transformation had really began to sink in—much to the chagrin of some of his Christian followers. Hiding behind a backdrop of up-tempo Graceland-style pop, the album weaves dark, lyrical tales of drunken car wrecks, sinful temptation and the harrowing decision to turn your back on something you’ve known your whole life.

If Curse Your Branches was his breakup letter to god—as many critics have taken to describing it—then Strange Negotiations, Bazan’s new album, is the sound of him embracing his new agnostic mindset and distancing himself from his years of questioning and personal turmoil. Musically, the album is as close to early Pedro the Lion as Bazan has sounded in years, as driving electric guitars and simple production have replaced much of the previous album’s acoustic and expansive nature. One listen to the lyrics, however, will quickly remind listeners of the overall tonal shift. On “Level with Yourself,” we find him reflecting on the destructive nature of squashing questions in favor of maintaining an image of faith.

“Wake up in the morning / Check your revelation / Make sure you know it as well as you can / Then sell it to yourself, man / Cause it won’t make a difference / If everyone believes it / But you don’t believe it”

Bazan’s complicated path to where he’s at now certainly hasn’t been easy. In fact, his own mother won’t come to his shows anymore because she thinks his new material will send its listeners to hell. But if the songs on Strange Negotiations are any indication, it seems he’s finally starting to find acceptance from someone who’s been eluding him for far too long—himself.