On a warm New York night, June 4th to be exact, I made my way to Williamsburg to check out some of the more compelling young psychedelicists, including indie blog darlings Sun Araw and Matthewdavid (both Los Angeles-based). The show was at 285 Kent, a concrete warehouse transformed into a quirky nightclub with its own “Indie Videogame Arcade.” Yes, there really is an arcade in the front room, bearing the name “Future Babycastles” and charmingly decorated with various fake plants. The games on hand included one that invites you to play as the YouTube character who celebrated Osama bin Laden’s death by shooting a gun in the air while on a moving tractor. Plenty of guaranteed fun. The venue featured street art-style paintings on the walls, almost exclusively done in black, white and grey, and it was all very neat. 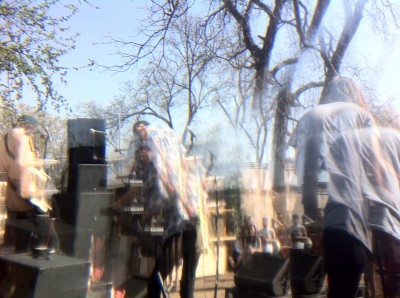 The night started with a knob-turning set by M. Geddes Gengras, whom some may know as a member of terrific drone/psychedelic outfits Pocahaunted and Robedoor. First there were some robust beats punctuated by blasts of electronic noise, then it all melted into sprawling, elegiac electronica with a hint of Oneohtrix Point Never, and finally built into a grand cacophony.

Next was Canadian-born d’Eon, whose track “Transparency” has made ripples across the music blogosphere recently. His area of specialty is cheesy electropop and R’n’B, which he weirds out with synth abrasions. It seemed to me that when playing live, d’Eon steps into the territory of art performance, with the main focus of it being his own uneasy relationships with cheesy, overly pretty music (echoing contemporary art’s mistrust towards beauty). His singing is theatrically neurotic, and throughout his set he makes various faces which range from “I can’t believe I’m doing this” to “Oh my god, the sound I just made is soooo beautiful I’m gonna weep.” I don’t know if such a reading of his practice would be plausible to him though.

Matthewdavid is a recent recruit to LA’s Brainfeeder, which nowadays is one of electronic music’s “it” labels (it’s run by master beatsmith Flying Lotus). At first Matthewdavid’s music seemed a little bit too woozy for my liking, but as the room’s temperature grew he started to really attack his machines, with each beat sounding like a vicious shot fired into an imaginary videogame villain. He also brought samples into the mix, conjuring up ghosts of pop songs which came out all cubist and mangled. An interesting producer indeed, I definitely need to check out his debut album “Outmind.”

Sun Araw is Cameron Stallones from the psychedelic group Magic Lantern. His project as Sun Araw started as a solo endeavor, but eventually the project morphed into a whole three-piece band. In addition to himself on guitar, vocals, and synths, Stallones is joined by Barrett Avner (Shahi Baaja) and Alex Gray (guitar). They specialize in lengthy, groovy and distorted psychedelic pieces that sound quite unlike anything else. I wouldn’t be surprised if they spawn a few imitators someday soon. The crowd seemed to really enjoy the performance by gently rocking to those blissful songs. By the end, everyone was majorly drenched in sweat. You’ve got to love the funk.