Juan Ormaechea is music lover, blogger, and special guest contributor to eventseekr. Recently we asked Juan, a resident of Toronto, to help us cover this month’s North by Northwest music festival.

From June 13-19th, Toronto hosted the 17th annual North by Northeast (NXNE). The festival is the premier destination for emerging music in the Canadian festival calendar. For five days, the festival brings hundreds of bands to dozens of venues within downtown Toronto. Many of the participating bands are cuvrrently unsigned, self-published, or lumped into the catch-all description “indie”. However, there is plenty of established talent on display, including such headline acts as Stars, Devo and Men Without Hats. In addition to the shows, NXNE also offers a broad selection of music-themed movie screenings and interactive workshops on the music industry, tailored for musicians and their promoters.

Like most people, I had a pre-conceived idea of what “indie” music sounds like. Using the word “indie” to describe a band’s style is akin to using the word “sound” to describe music in general; it’s accurate, but wholly inadequate. The sheer range of the shows and the bands in attendance defied such simple characterization, running the gamut from quiet acoustic singer-songwriter sets to all-out, hard-driving, guitar-laden rock. I was pleasantly surprised that almost without exception every band that I managed to watch had a remarkably polished sound, because I’ve always associated “indie” with “low-fi”. I fully admit that whatever I may have imagined indie music to be was quickly and happily proved wrong. It is in breaking apart these preconceptions that NXNE really shines and celebrates the diversity and dynamism of new music, allowing the festival-goer to enjoy a range of musical styles from folk to electronic to metal. In fact, with 650 bands playing nearly 50 venues the festivalgoer could enjoy that range on any given night. It’s this scale and variety that make a comprehensive description of the festival difficult. It’s not only possible for two people to have completely different NXNE experiences, it’s entirely likely.

My own personal experience was something akin to a man trying to drink from the business end of a fire hose. It quickly became apparent that unless I perfected bi-location or human cloning, I wouldn’t be able to see all the shows, bands and films that I would have liked to. So I had to make some tough decisions in planning out my approach. There are a couple of ways to take in the festival; some choose to schedule each night based on the shows they want to see, while others choose the venue-hopping approach. I’ve always been a planner, but I decided to take a bit of a hybrid approach by scheduling the shows I wanted to see on the first and third nights and venue hop on the second.

The first show I attended was not of a band, but a documentary film screening on Wednesday afternoon at the National Film Board. “Upside Down – The Creation Records Story” traces the story of the esteemed British label of the same name from its founding in 1983 through to its dissolution in 1999, as well as that of its founder Alan McGee. The film recounts the chaos of the label’s all-too-brief existence through interviews with artists that were part of the Creation stable, which included iconic bands such as Swervedriver, My Bloody Valentine, Boo Radleys, Jesus and Mary Chain, and of course Oasis. It’s a fascinating retrospective on a singular era in music history and the mad brilliance of many of the personalities that shaped it. This film is required viewing for anyone who has fond memories of the Shoegaze/Britpop scene in the late 80’s and early 90’s.

Wednesday evening, I saw the first act of an Audio Blood sponsored NXNE party called “Go Folk Yourself” at the Bellevue. I was quite taken with Emma Hill’s sublime lyrically-driven acoustic set. Her sweet voice belied the intensity of her performance; she was putting everything she had into each song, and deserved a larger crowd on hand to appreciate her efforts. But given that this is Canada, and this was the same night as game seven of the Stanley Cup Finals, I suppose the turnout was decent and extremely appreciative. Emma spun some real magic with her set and charmed the heck out of the audience. I for one will make a point of seeing her show the next time she comes to Toronto.

My musical tastes tend to be very eclectic and can enjoy almost any genre of music. Though it was an interesting exercise, Thursday’s venue-hopping turned out to be a bust. I’m terrible at planning spontaneity and I should stick to my strengths, because while I was treated to some great music at venues like Horseshoe Tavern, Rivoli, Bovine Sex Club, and Velvet Underground, none of the music really connected with me.

Friday night was what I had been most looking forward to. The evening began at Yonge/Dundas Square where Diamond Rings and Land of Talk were opening for Montreal’s Stars. It would end many hours later with Swervedriver at The Great Hall. By the time Stars took to the stage, the crowd at Yonge Dundas square was shoulder to shoulder, and it was evident which act most people had come to see. The band electrified the audience with some of their most popular songs “Fixed”, “Your Ex-Lover Is Dead”, “One More Night” and “Ageless Beauty”. Between songs frontman Torquil Campbell got a lot of cheers for telling the audience about the band’s apparent love affair with Toronto. The band came back for a three-song encore, bidding goodnight to the appreciative crowd with “Elevator Love Letter” from their second LP Heart. 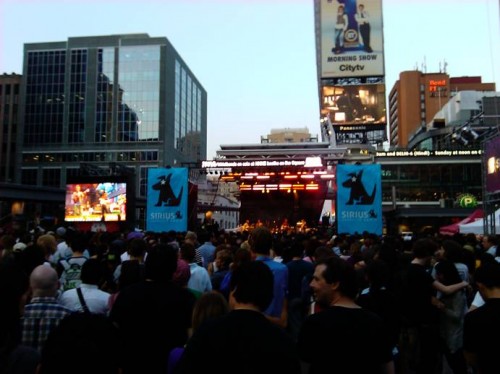 As good as Stars were, I was pleasantly surprised by Montreal’s Land of Talk, who opened up for them. The audience on hand was treated to a magnificent performance. Singer Elizabeth Powell’s voice was positively hypnotic as the band played through one captivating tune after another. Some of the gentler songs sounded almost folk-ish, but with very strong rock sensibilities. Other tunes were vaguely reminiscent of Bethany Curve’s work, with strong, driving rhythms and atmospheric guitars. Though most of the crowd had come to see Stars, Land of Talk stole the show.

Afterward, I was off to see Swervedriver at The Great Hall, a recently-renovated, 19th-century building that was formerly a YMCA. I remember going to a Swervedriver concert back in the early 90s but never quite making it, so this concert was about 20 years in the making for me. Approaching from the street, the venerable old Victorian-style building seemed humorously at odds with the death-metal music that was emanating from within. Taking stock of the crowd, it occurred to me that these were probably the exact same people I would have seen had I made it to the concert 18 years ago. All of us still just young enough to enjoy a good loud rock performance, but just a little too old to mosh. Swervedriver took the stage and immediately launched into “Last Train to Satansville” before all the cheers for their arrival had died down. While the acoustics and the venue’s sound mixing left something to be desired, it was ultimately a great performance from the band as they poured over classics like “Deep Seat”, “Pile-Up”, “Rave Down” and “Son Of Mustang Ford”, and earned the cheering crowd a thumbs-up from the band. The encore ended with the incomparable “Duress”, an absolute marvel to behold live. This was totally worth the wait.

In the end, NXNE is a tremendous experience. Toronto already has a vibrant music scene. This combined with the sudden influx of talent, energy and publicity that comes with a world-class festival really allows the host city to shine. Thus, putting a well deserved spotlight on the many great venues that make Toronto a great destination for music lovers everywhere.