[Editor’s Note: Thanks to one of our readers, grievingguy, we realized we misspelled Tim Baltz’s name with “Blatz”. We have since corrected ourselves in the piece. Our apologies to Mr. Baltz for confusing him with Tim Blatz, the superhero-secret agent with the license to kill. We promise it won’t happen again.]

For those who are unfamiliar with Chicago’s The Second City, here is what you must know: it’s hilarious. Founded in 1959, it opened its doors as a comedic cabaret that focused on a brand of comedy based in improvisation and sketches. Due to its originality, it quickly grew in popularity, as did the list of comedic geniuses who started there. Today, The Second City has its original theater and an additional E.T.C. Theater in Chicago, a theater in Toronto, a touring company, and training centers in Chicago, Toronto and Los Angeles. Their list of alumni includes John Belushi, John Candy, Eugene Levy, Gilda Radner, Stephen Colbert, Tina Fey, Amy Poehler… you get the idea. It is the premiere spot for comedy, and as a result, my first stop in Chicago. 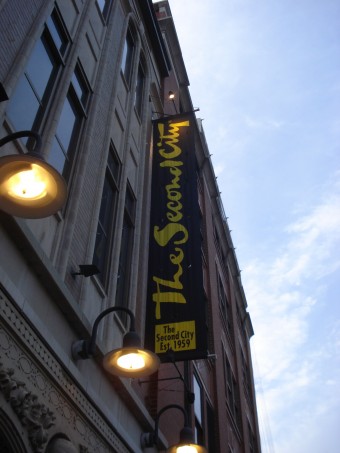 We got tickets for the early show of Sky’s the Limit (Weather Permitting), a six-person revue at the E.T.C. Theater, right next door to the Main Stage. From the moment the lights dimmed and the announcer’s voice boomed out, the show was fast, sharp and funny. It alternated between monologues to group sketches to songs to improvisation, with the actors never missing a beat. Each piece related to the same theme: trying to get through and succeed at day-to-day life, regardless of how crazy the world – and weather – behaves around you.

While I enjoyed every sketch, there were several stand-out moments. The first one occurred early in the first act. The sketch depicts a man (Tim Baltz) and woman (Mary Sohn) on a first date, but the man is so nervous that he brings flash cards to respond to the woman’s questions, including a card for when to laugh. Meanwhile, a snarky waiter (Michael Lehrer) delivers zinging one-liners while hitting on the woman; but he softens as he watches the date progress. The three actors deftly executed the date’s very painful exchanges, while landing every single joke, creating the type of comedy that coaxes the hilarity out of life’s most awkward moments.

Baltz was later joined by Brendan Jennings as two Chicago cops in a first-rate improv scene. Taking suggestions from the audience, these two men crafted a narrative that was so witty, it was difficult to keep up. They also side-stepped an awkward exchange when they asked the audience to tell them a distinguishing marker for one of the actors on stage; in response, an audience member yelled out “African American” (mind you, the actor was Asian and wearing a ridiculous fake mustache.) Without blinking, Jennings turned the suggestion on its head and referred to the actor as “not quite white,” thereby poking fun at the audience member.

The two other stand-out scenes were by the remaining female cast members. Aidy Bryant plays a woman who has fallen in love with a bird (Baltz), an idea so zany that only Bryant’s honest expression and enthusiasm can pull it off. The other best moment featured Jessica Joy who sings about all her unanswered questions. For example, “Why did I work so hard to get Britney Spears’s body when I could have waited for it to turn shitty?” and “If Jesus doesn’t sing on your album, why are you thanking him for your Grammy?” These talented women nailed these monologues so entirely that I did not want them to walk away. 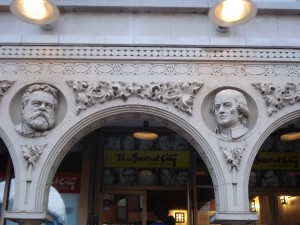 But, then again, I didn’t want any of the actors to leave the stage. So when the finale ended (which somehow leads to a surprising re-creation of Michael Jackson’s Thriller), I immediately wanted to buy tickets to The Second City’s other shows in Chicago. However, they were – as they should be – sold-out.