I didn’t know what to expect.

I have only gone to music festivals in California. At these events, I have my core crew of friends that I make these treks with. This time however, it is a smaller pack I am running with, and so it felt a little weird at first.

“They should be here,” or words to that effect had run through my mind the night before the festival actually began. By the time we entered the festival grounds, and the rush of music blaring every which way through Grant Park hit my body, a lot of that weird uneasiness went away. Not all of it, mind you. But a good portion of it at least. Of course, I’m still getting used to the humidity. Oh goodness gracious, the humidity. 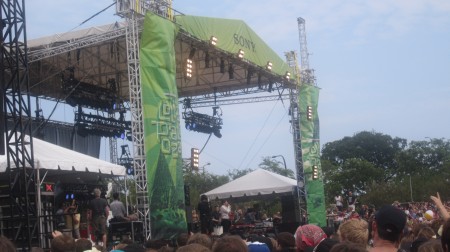 Foster the People at Sony Stage. Photo by Joey Pangilinan.

First band of the day was Foster the People. I had only given their album, Torches, just one full listen. I wasn’t all that familiar with them, but their energy was great, and it was equally reciprocated by the audience. The band’s lead singer, Mark Foster, was dressed in a white, long-sleeved collared shirt. That combined with the humidity left Foster drenched. He looked like he had just gotten out of a swimming pool after being thrown in it with all of his clothes on. The only thing that wasn’t that great was just how packed the Sony Stage was. My friends and I ended up settling for a place to the stage’s right, and our specific spot left us at a bad angle to listen to the speakers. To get away from the large crowd before everyone dispersed, he left just before they played their hit, “Pumped Up Kicks.”

After a quick bite to eat, we caught the latter half of Feed Me’s set at the newly expanded and much hyped Perry’s Stage. What was once a small square in the park had been transformed into a large dance tent that reminded me of the Sahara Tent at Coachella. The sounds of dubstep and hard electro coming out of Feed Me’s set sent my food coma urges straight out the window. 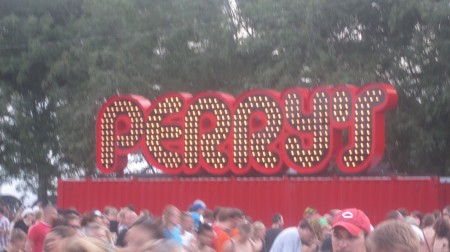 The Bloody Beetroots were up next at Perry’s, and like many of their sets over the past few years, Bob “Cornelius” Rifo and crew performed not with a DJ-set, but as a live electronic band that toed the line of hardcore punk: The Bloody Beetroots: Death Crew ’77. I’ve experienced the Beetroots live for both a DJ-set as well as the Death Crew. To properly enjoy either, you just have to separate one from the other, and accept that they are different experiences. You’re likely to have more fun.

Up next was Tinie Tempah, well towards the end at least. Being a big Swedish House Mafia fan, I flocked to see Tinie Tempah when he started singing “Miami 2 Ibiza.” Just before finishing with “Written in the Stars,” Tempah made the bold statement (it was bold to me, at least), that he thought this crowd was better than the one he had Coachella. I was not at Tempah’s set when I went to Coachella this year, and not in any position to judge, but since Coachella popped my festival cherry, I am completely biased about the idea that Coachella could be inferior to any other festival. My affinity for Coachella is so deep that Tempah’s statement gave me the feeling I got when I discovered for the first time that professional wrestling is scripted. 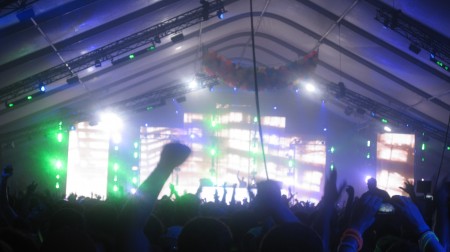 My mates and I thoroughly enjoyed ourselves at Afrojack’s set, and even more so after that as we closed out our night watching Ratatat. The humidity coupled with all the humanity inside at Perry’s made it a sweat-box. I am a man of thin frame, and if I had stayed in that tent any longer after Afrojack’s set, I would have sweated off so many pounds I would have looked thinner than Captain America before he was injected with the Super Solider Serum.

Ratatat closed out the Google+ Stage, and it was absolutely amazing. I missed out on the guys at Coachella, and it was a thrill to get a chance to see them this time around. I am not all that familiar with their entire catalog, but their music is accessible enough that their brand of rock infused electro and synth was a perfect way to end Day 1. Their set, and the Beetroots’ as well, completed my adjustments to being at a festival without the majority of my regular festival crew. The best way to enjoy is to simply soak it in as something separate, different and all its own.