Day 2 is what I had been waiting for the most. Friendly Fires had an afternoon set on the Bud Light stage, one of the two main stages. As I had previously mentioned in an earlier post, I had been wanting to see them for the longest time, but there was a schedule conflict between them and Skylar Grey. But after catching Skylar at Rickshaw Stop in San Francisco a couple weeks back, I was able to eliminate that conflict. 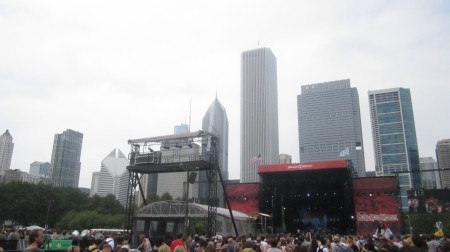 View of the Chicago skyine during Friendly Fires. Photo by Joey Pangilinan.

Friendly Fires played an all too short 45-50 minute set just after two-o’clock, but what an amazing set it was. Catchy, rhythmic tunes that make you want to dance uncontrollably is the kind of music that is right up my alley. My friends and I arrived just as the band was starting to play “Jump in the Pool,” one of my favorite tracks from their self-titled first album. I geeked out a little later on when they started to play “Blue Cassette,” and then my afternoon felt complete when they played “Hawaiian Air” towards the end. For the life of me, I can’t remember which song it was when frontman Ed MacFarlane went into the crowd, and sang while starting a mini-dance party around him. If I were anywhere closer to the stage, I would have tried to get in on that circle.

After a quick bite to eat outside the festival grounds at Potbelly’s, my mates and I were off to see Local Natives. Admittedly, I am unfamiliar with them, but my friends adore them, and I had a blast along with them. The catchy hooks on “Airplanes” made it easy enough to start singing along with the rest of the crowd. Overall, a pretty satisfying set. 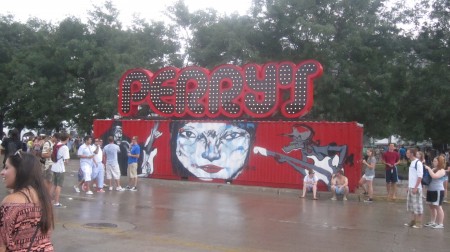 We began the end of our Saturday night with The Glitch Mob back at Perry’s, and they opened with their remix to Daft Punk’s “Derezzed.” My friends and I noticed a few changes that the festival had made from the first day: some new art was on big Perry’s signage, and some of the tarps that covered the actual tent had been stripped to try to create more airflow. But with the off-and-on rain earlier in the day, that also meant a little rain had seeped into the tent. Before I knew it, there I was amongst the mass of people putting my fancy footwork on display in the slightly muddy grass. Another highlight had to be seeing a little toddler hoisted on his dad’s shoulders during Glitch Mob’s set rocking out and throwing up the dio-hand sign, bringing in his two middle fingers in and extending his pinky and index fingers out. It was quite a sight.

Pretty Lights were up next at Perry’s and the crowd absolutely erupted when he opened with “I Know the Truth.” I first heard this track when I saw this Pretty Lights’ video from this year’s Bonnaroo. A little over half way through the set, I needed some air. Despite removing some of the strips of tarp covering the tent, Perry’s stage was still a sweat box. I wandered to see Eminem at the nearby Music Unlimited stage and watched the rest of his set from afar. The original plan was to go back to Pretty Lights, especially when I was able to hear Pretty Lights start playing his remix to Kanye West’s “All of the Lights.” But I turned right back around and walked back to Eminem when I heard the beginning beats to “My Name Is…” What can I say? Eighth-grade Joey would have been disappointed had I not stayed for that song. After that, I figured that I may as well stick it out til the end of Em’s set, and was again rewarded with another bit of nostalgia when he performed “Lose Yourself” as his encore. Not a bad way to end Lollapalooza’s second day.