Annie Closs, Katherine Hamilton, Katie Kopacz and Mudit Suebsukchareon have been an awesome addition to the eventseekr team over the past 10 weeks. Charged with either the articles that have been published or other research tasks, all four are made of awesome, and we are very thankful for their hard work. To close out their time here this summer, we asked each of them to choose a few bands from this year’s SF Outside Lands lineup and share why they would love to see these performers live. 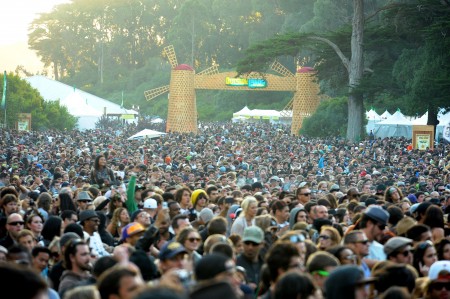 The large crowd at the 2010 edition of SF Outside Lands. Photo by Jeff Kravitz.

If you’re more of the “it ain’t music unless you’re playing a live instrument” type, I’d recommend Kelley Stoltz. As a die-hard Beatles fan, I love how Stoltz’s organic rock and roll voice is John Lennon-esque. His raw crooning and folksy lyrics combined with beautifully natural instrumentals also reminds me of Dr. Dog. I think I even heard someone playing the spoons in the song, “Prank Calls.” Admittedly, the earlier time slots of the day are less populated, since the chosen bands are generally up and coming, less mainstream acts. However, I’ll be sure to show up early on Friday afternoon to reserve my spot by the stage for Kelley Stoltz’s set.

I was introduced to Phantogram while cruising on a hot day in the passenger seat of my roommate’s 1979 Mercedes Benz. This spacey indie pop band is made up of duo Sarah Barthel and Josh Carter. Their sound is a combination of organic musical talent mixed with choppy samples and upbeat electronic influences, which is perfect for a lazy day. There is no time better to enjoy it than when the Golden Gate city breeze is pushing the music through your hair. Since I’m lucky enough to have scored a three-day pass to the festival, you’ll see me there too. If you like The xx, you must check out Phantogram.

Foster the People’s song, “Pumped Up Kicks,” became a chart-topper this summer, and their arrival in San Francisco coincides perfectly with their newfound popularity. I wish I could remember where I first heard their hit song, but it’s been playing all over the place lately and I can’t help but turn it up every time it comes on. The cool beat is overlaid with a mixture of acoustic and electronic sounds, resulting in an upbeat song that dares you not to sing along.

MGMT’s psychedelic tunes and interesting lyrics caught my attention in 2008. It wasn’t the same as anything I had listened to before. It was something new, fresh, and out of order. Their music was something unexpected, and since then I’ve anticipated seeing their performance live. They’ve played in SF a few times but I’ve never been around to see them. Some of their songs that have rocked my world: “Time To Pretend,” “Kids” and “Electric Feel.” They put me in a good mood.

He’s half of Outkast, yet with a wholly different sound and one of the best flows out there. I received Big Boi’s 2010 solo album, Sir Luscious Left Foot, as a birthday gift from my musically-minded friend and it was one of the best presents I could have asked for. I would spend the entire weekend at Outside Lands just to have my five minutes of dancing to “Shutterbugg.”

The Shins were a defining point of my adolescence ever since “New Slang” was featured on the ubiquitous Garden State soundtrack. Their most recent album, Wincing the Night Away, was released in 2007 during my freshman year of high school. Normally that would be a source of complaint for me, but with The Shins, it’s different. Perfection was there all along, and it’s like nothing has changed since 2007. Oh, to watch them at Outside Lands and be transported back in time.

Another great act scheduled to perform at Outside Lands this summer is Eskmo, a San Franciscan electronic music composer. A mix of trip-hop beats, brilliant sampling of both spacey and natural woodsy tribal sounds (including bird noises), and swirling acidy electronic accents, Eskmo is sure to give a unique performance that is high on my list for the weekend. If you like the Glitch Mob and you’re excited to see Deadmau5, Eskmo should be on your list, too.

I first saw Girl Talk at a small concert at my school this spring. I was lucky enough to see him at a small show, but I would love to see him again at a big festival like Outside Lands. Gregg Gillis is a crazy guy and he puts on an awesome performance. At the show I went to, the crowd was TP’ed while he ran around jumping up on the tables, providing lots of entertainment. He combines so many different songs and sounds that somehow fit together perfectly. I’m sure his mash-ups would be even more entertaining at Outside Lands. 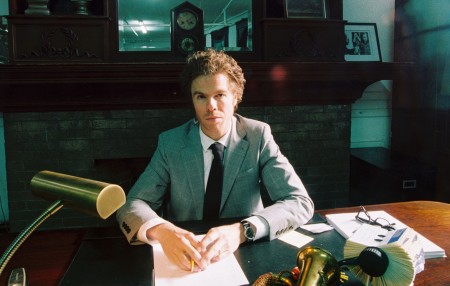 I discovered Josh Ritter while looking through the Explore Artists feature on the Outside Lands website, and after hearing the first twenty seconds of his song, “Good Man,” I would definitely want to see him live. Performing with the Royal City Band, it seems like his set would be a good way to relax after listening to some crazy electronic music. His soft voice blends perfectly with his acoustic sounds, and he seems to have a lot of depth and ambition.

Joel Zimmerman, otherwise known as Deadmau5, is the present guru of electronic music. He constantly comes out with music that is nothing short of spectacular, and that makes him one of my favorite artists. His music puts me in another state of mind, and he’s so unique in his character and style that it makes him more than just another DJ performing and mixing tunes. I’ve seen his performance at the Treasure Island Music Festival, and his set was just jaw-dropping.

Beirut makes me feel like I’m sitting in my awesomely talented Balkan friend’s college dorm room while he serenades me with his honey-sweet voice and his random assortment of musical instruments he has sitting around, like a flugelhorn and ukulele. In what would seem like musical cacophony, one finds a strange sense of comfort and familiarity. It’s like when you get too caught up in searching for the truths in life and someone just has to tell you to chill out. There’s order in chaos, and the truth was right in front of you all along.

Even their style of performance matches up with their music’s perfect thrown-together sound, which makes them shoot to the top of my must-see live picks. Check out this video of them performing “Nantes” live on the streets of Paris, complete with recycling-bin drumming: