When you plan to go to anything outside in San Francisco, the first thing you worry about is the weather, namely how cold it will be. For this reason, I warned two visiting friends (one from Virginia, one from Los Angeles) that they could not wear shorts; they had to wear jeans and closed toe shoes, and should bring sweaters, scarves, gloves, coats, etc.

But San Francisco proved me wrong on this particular day. The weather was perfect, holding sunny in the mid-70s. This alone would have been enough to ensure an excellent Outside Lands, but that turned out to be merely the beginning. 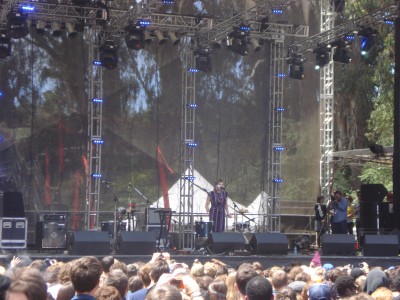 We started our day with tUnE-yArDs at the Sutro Stage, a performance that was as fun as it was captivating. We were lucky to be close to the stage, giving us the opportunity to watch Merrill Garbus, with her characteristic face-paint, loop her amazing instrument of a voice with a drum, a ukulele and various other instruments. But, I don’t think that the people in the – continuously growing – back of the crowd were at a loss. They seemed to dance to “Bizness” and sing back to Garbus as much as everyone else.

After tUnE-yArDs, we walked over to the Twin Peaks Stage to check out !!! (Chk Chk Chk.) This walk was an experience in itself, leading first down a path that had colorful tapestries hanging in the trees, and then through “Choco Park,” an area with a carnival theme and various dessert vendors. These decorations made the hike enjoyable, as opposed to the stressful run/walk that usually occurs when trying to get to the next band at a different stage. !!! then kept our energy high with their joyful punk/pop tunes that made dancing – and watching the surrounding dancers – very easy. 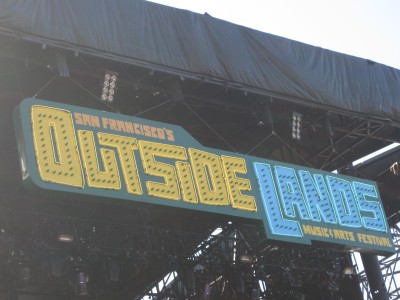 At this point, our group decided to post up at the Lands End Stage until Arcade Fire. The first act we caught there was John Fogerty who I truthfully had no idea had so many hits. While I expected to watch the set leisurely, I ended up singing and dancing through the majority of it because the energy he inspired was infectious, especially once he launched into “Have You Ever Seen the Rain?” There was also no way to stay sitting once you saw Fogerty’s drummer who was rocking out so hard and was having such a great time that you had to join the fun.

The Decemberists took the stage next, jokingly calling themselves “the meat in a John Fogerty and Arcade Fire sandwich.” This set was the biggest surprise for me. I’ve always liked The Decemberists, but have never been a super fan. However, their frontman, Colin Meloy, masterfully interacted with the audience, creating an uplifting atmosphere while keeping the music complex. The set culminated in “The Mariner’s Revenge Song,” a 9-minute song that prompted the band members to act out different characters’ roles, even giving the audience the role of shipmates being eaten by a whale. All we had to do for this was scream together, which was easy enough since we had been doing that all day.

Now, if I had gone home right then, I would have been very happy with the day. I had heard amazing music, had gotten sun(burned) and had eaten delicious food (the winner being the Chicken Tikka Kati Roll from Kasa Indian Eatery.) But then, after all this, with a huge moon rising over the park, Arcade Fire took the stage and kicked off with “Ready to Start.” The band played for the next hour and a half, performing songs from their latest album, The Suburbs, and older staples, like “No Cars Go” and “Neighborhood #1 (Tunnels.)” Meanwhile, in the background, a screen showed shots of suburbs, cutting to sepia clips of the band members. All in all, the set was magical, alternating between songs to rock out to and more contemplative songs, perhaps best exemplified in their encore of “Wake Up” and “Sprawl II (Mountains Beyond Mountains.)” This encore was particularly fitting since it allowed the last image of the day to be Régine Chassagne in a big, white, sparkling dress, dancing in circles while waving colorful ribbons. 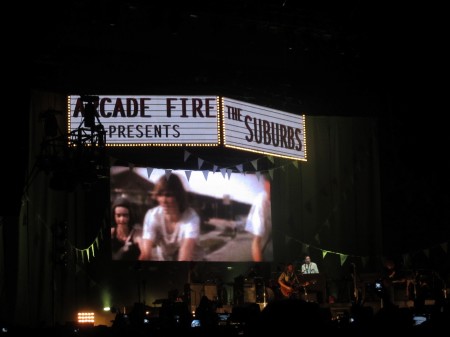 That image truly summed up their performance, and really, the whole day: beautiful, fun and surreal in its perfection.