In addition to the interns that regularly contributed to the blog this summer, the eventseekr team also had interns throughout the office working in other departments. We asked some of them to write reviews of recent albums that struck their fancy. First up was indie-rock group A Lull‘s Confetti, written up by Janelle Gleason. This time we have Sharon Kim’s review of Cloud Control‘s Bliss Release.

August may be coming to an end, but it’s never too late to find some great new music to provide a soundtrack to the last days of summer. Bliss Release, Cloud Control’s debut LP is just that album. Although the four-piece’s work is relatively new to the U.S., Bliss Release has already received substantial critical acclaim in their native Australia. 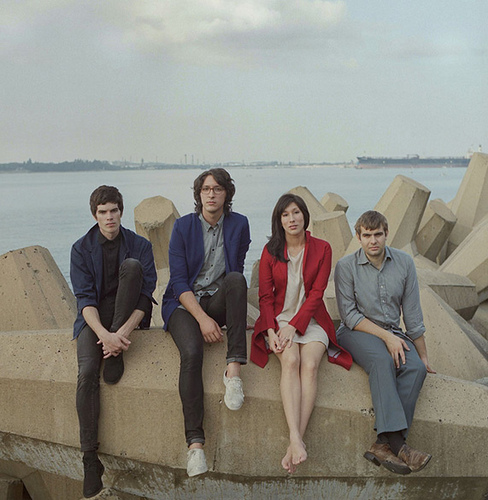 Cloud Control’s debut is a well-crafted indie folk album full of infectious harmonies that you will want to hear over and over again. Bright folk sounds, psychedelic rock influences and the echoing voices of singer-guitarist Alister Wright and Heidi Lenffer combine to produce a unique indie folk album. It’s amazing that this band formed just before entering a band competition, never having sung or performed together before, let alone write music. However, despite their relative lack of experience performing together, the quick success of this foursome in their native Australia comes as to no surprise to those who have listened to their music.

Similar to other indie acts such as Fleet Foxes, Vampire Weekend and The Shins, Cloud Control has demonstrated their ability to capture audiences with their firm grasp of folk-rock songs. The first track on the album, “Meditation Song #2 (Why, Oh Why),” begins with a gentle folk tune and sweet boy/girl vocals followed by electric guitar riffs and percussion. It’s a strong opening that leads into both upbeat and laid back folk songs on the rest of the album.

After selling out shows throughout Australia and the band’s upcoming tour of the UK, Cloud Control is sure to be an equally quick success in the U.S., particularly among fans of indie folk music.