Last Thursday, I saw I Wayan Wija perform his Tantri shadow puppet play at the Asian Art Museum‘s Matcha event, and I’ve been thinking about a way to adequately describe it ever since. It wasn’t the first time I’d seen puppetry in general (does Sesame Street count?), but it was the first time that I’d thought to interpret it purely as a cultural art form. When I arrived at the museum, the line streaming out the door and down the museum steps clued me in on the fact that I was in for something special. Even with this mounting anticipation, the degree to which Wija’s performance enchanted me took me entirely by surprise. His shadow play is a performance I won’t soon forget. 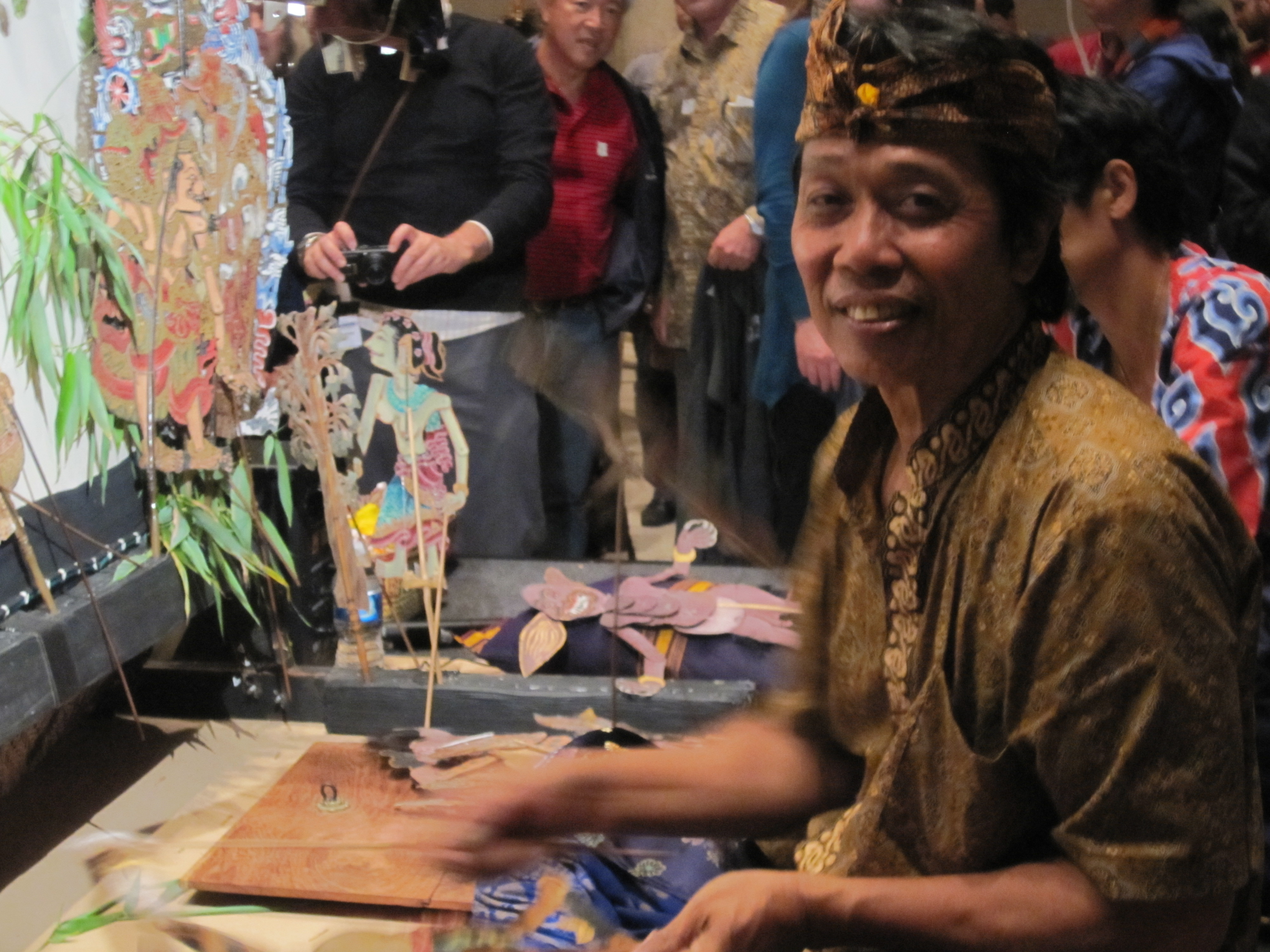 I Wayan Wija behind the paper screen. His hands were always a blur. Photo by Lucia Chung.

For the play, Wija told a story (in English) based on the Panchatantra set of fables. A priest wanted to find out if he was stronger than a king from a neighboring land, which led to a series of battles mixed with light-hearted gags and funny dialogue. The story ended with the god, Vishnu, putting the matter to rest. The puppet stage consisted of a raised platform with a backlit paper screen, behind which sat Wija, his assistants and the gamelan orchestra. In the museum’s comparatively large Samsung Hall, with its high, domed ceiling, the setup was dwarfed – but that only enhanced the event’s intimate feel. A camera was placed behind the puppet stage and projected Wija’s movements onto a projector screen on the right side of the room, so patrons could get an insider’s peek at what was going on behind the stage. As a result, the audience could either choose to focus on the shadow play on the paper screen, or on Wija’s face and movements on the projector screen. 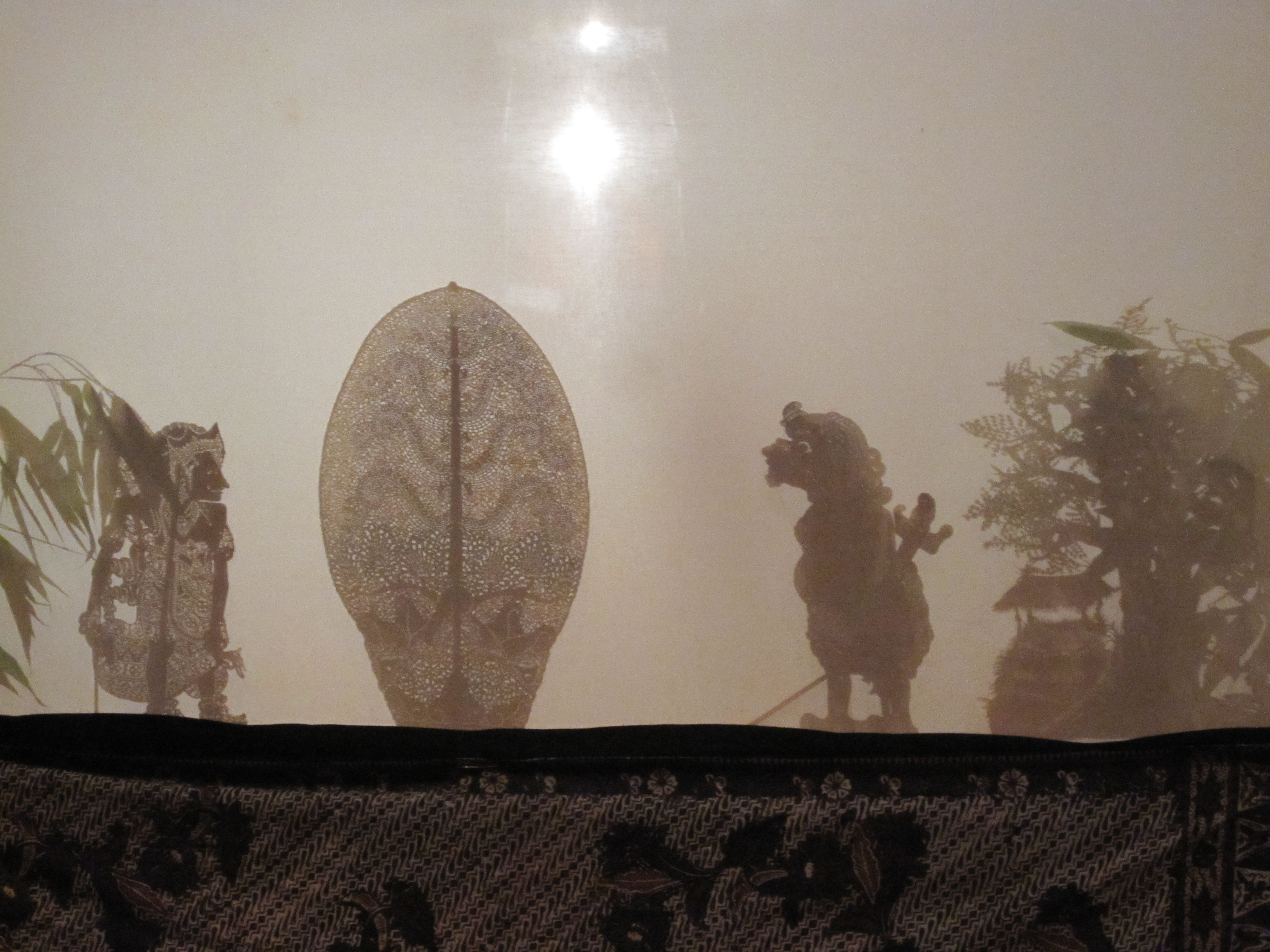 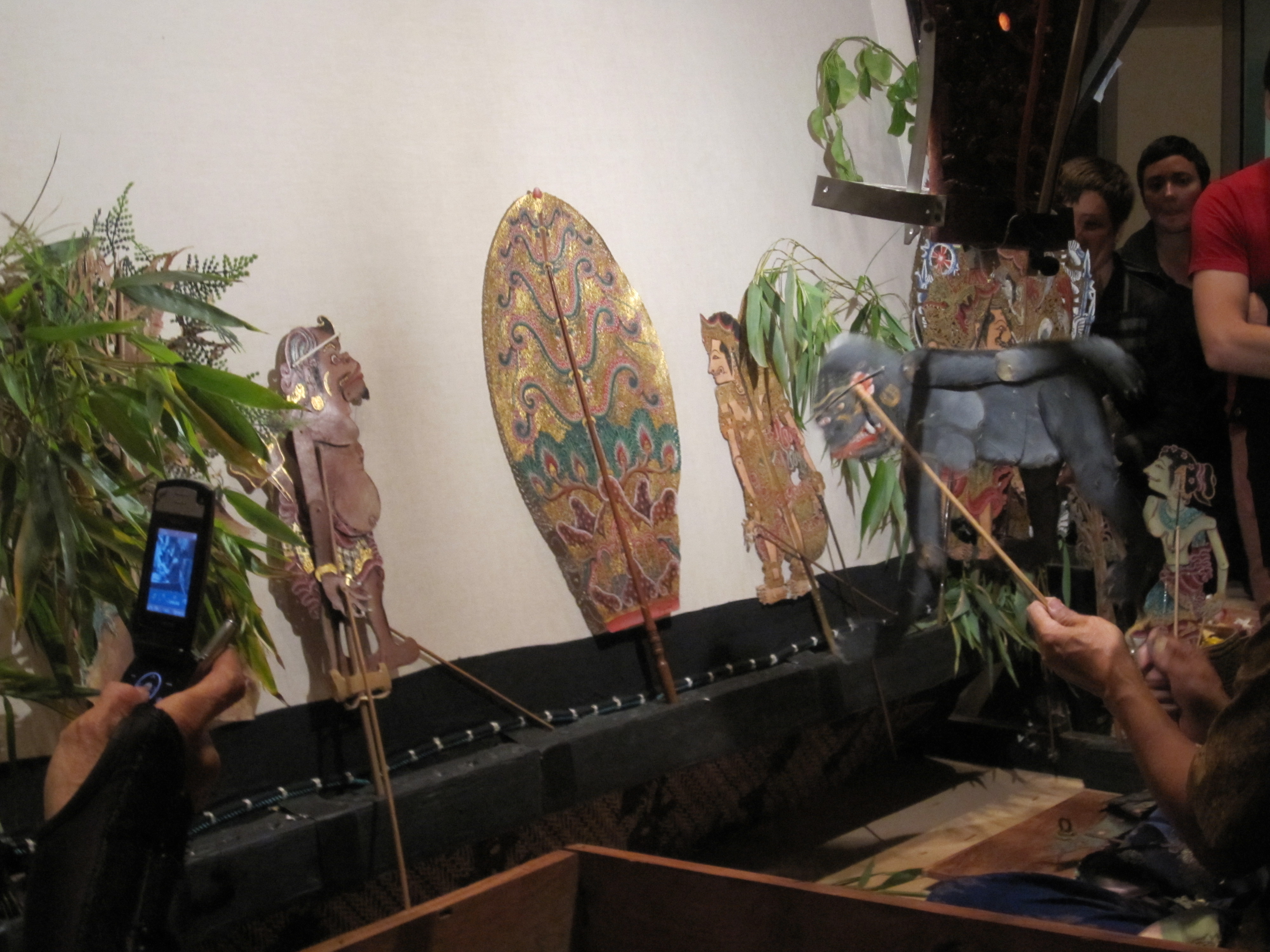 For me, his performance was striking for two reasons. The first was simply because it was so funny! His characters were downright hilarious, and could do things I never thought possible (think pop-n-locking, slow-motion Matrix-esque battles and martial arts moves Jet Li would admire). Because of the effects of light and shadow, the two-dimensional leather puppets achieved a three-dimensional aspect at times, and looked like they could fly off the screen. The round, chiming tones of the gamelan orchestra filled the room and helped set the scene, instantly transporting us from a museum in California to a magical space where a triceratops and tyrannosaurus rex could take center stage alongside gods and bickering men.

The second reason his performance struck me so profoundly was because the museum had provided us with a basic explanation of what it takes to be a dalang (shadow puppet master). Not only does the dalang need to have an intimate understanding of the stories he tells, he also needs to design and make the puppets he uses, deftly manipulate them to tell the story, voice all of them, and conduct the gamelan orchestra behind him by striking a small drum with a little mallet that he holds between his toes. Each puppet gets a different tone of voice, be it a whiny falsetto or a gruff roar. At one point, he voiced three puppets at once in what I can only liken to a beatboxing routine, leaving the audience cheering for more. I was definitely dazzled by his performance, but when I had a chance to process and think about all the things he was coordinating simultaneously, I was simply awestruck. Watching him, I realized what it means to be a master of your art, and to have the ability to pull people into a world of your creation.

Since my description in no way does his performance justice, I highly recommend trying to see his plays firsthand. Wija will be performing another shadow play, this time a story from the Mahabharata myth cycle, on Thursday, 8/25/2011 at the Asian Art Museum. He is also the museum’s current artist in residence, and will be giving demonstrations during the day according to this schedule. If you can’t catch him at the Asian Art Museum, you can also try to see him at UC Berkeley on September 2.