By ALEXA DOOSEMAN
Here are the people who will love Mortified: People who have re-read their journals (or, in my case, terrible poems) from junior high and thought, “How is that me?” People who involuntarily cringe in the middle of telling stories about their teen years. People who laugh out loud at photos of themselves from prom, football games, dance recitals, art shows, pep rallies, or any other high school event. In other words, people who survived adolescence and have the gift of perspective need to experience Mortified.

Okay, so, what exactly is it? 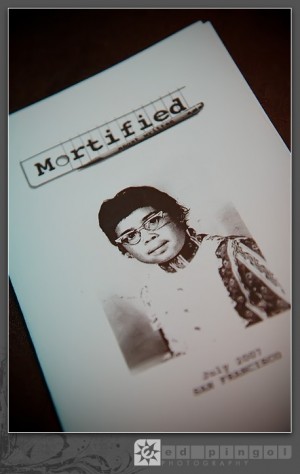 Mortified is an event when adults share – through letters, slide shows, diaries, home movies, etc. – embarrassing stories about themselves from adolescence. It’s a curated evening, so the readers (who are always different for each show) are decided upon and have worked with Mortified producers. The night is truly, in both senses of the word, gut-wrenching: so funny that tears stream down your face and so honest that you hurt for the past versions of these strangers.

Take, for instance, one memorable reader who I saw in San Francisco. He shared a series of grade-school letters that he wrote to Mr. Belvedere – that’s right, as in, the sitcom character. He originally wrote these letters as part of a week-long class assignment, but then continued to write them for a full year. As if this set-up isn’t funny – and touching – enough, every letter revolved around food and the mediocrity of this boy’s day (they’re all “okay”), and then ends with the day’s rating on a five-star scale. For this boy, every day – regardless of childhood highs (like a class party) or lows (like getting sick) – was four and a half stars. This was a comic goldmine for the reader, to the point that the audience began chanting back to him, “four and a half stars.” And when, in the last letter, the boy achieved a five-star day, the audience seriously cheered as if they had just seen a miracle, as if they themselves had achieved the miracle.

This is the genius of Mortified. The audience attaches themselves to the people on stage, rooting for the readers’ former selves, because they, of course, remember that phase in life. It makes the experience of growing up, in all its mortifying reality, relatable. And since adolescence is the main time period when we think that nobody is like us, it’s comforting to realize that everybody was like us: hormonal, confused and, in many ways, innocent. It’s a cathartic night out – especially since you watch people who are now so well-adjusted that they can step on stage and reveal their most humiliating moments to a room full of strangers. This turns the insecurities and awkwardness of being a pre-teen and teenager into hilarious material, now coming from the voice and security of adulthood. Mortified makes you feel like, yea, yea, that’s right, we all – myself, the readers, everyone in the audience – got through that. It takes the loneliness out of those memories because now everyone gets to laugh and gasp and shirk at them together.

If you are any of those people who I listed in the first paragraph (and I hope you are), in the next month, you can check out Mortified in San Francisco, Berkeley, New York City, Portland, Los Angeles, Chicago and Washington DC. If you are not in these cities, do not fret! You can also see Mortified in Austin, Boston and Malmo, Sweden – just check eventseekr or the Mortified website for upcoming dates.