The Yerba Buena Center for the Arts is my favorite art venue in San Francisco – more often than not its exhibitions provide excellent brain food. It is a prime place to see artists that have their works shown at world-class exhibitions like the Venice Biennale. Currently, the center is holding its own major recurring show, the “Bay Area Now” triennial (until September 25). What are we to make of it?

The triennial consists of three parts: Performing Arts, Film/Video and Visual Arts. I am going to weigh in on the last of the three. The exhibition does not have an overarching theme; it is more like a showcase of emerging talent responding to various “Bay Area issues,” which include our relationships with nature and technology as well as “nomadism” in a globalized world and drug politics. Bitterly missed are the themes that, in my opinion, are absolutely crucial to any discussion of the current state of affairs in the Bay Area: the deepening social inequalities, labor issues, and the slow exodus of the middle class from San Francisco. The pieces on view are smart and witty, but strangely safe and inoffensive. Some may consider the neon sign in the form of a marijuana leaf hanging right above the front entrance offensive, but to me it is such a familiar feature of the San Franciscan pop culture landscape that it is barely worth mention. Even the works that deal with the least comfortable theme – David Huffman’s abstract paintings that, as the gallery assistant told me, imply places where poor African American youths congregate to play games but also to buy and sell meth – seemed to me more wistful than poignant. 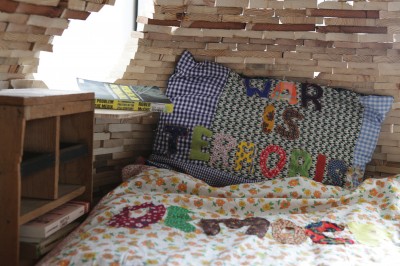 A case in point is the installation by Suzanne Husky, which features abundant leftist agitation (it calls for “degrowth,” or rejection of the idea that economic growth will bring progress), but whose form undermines the serious message. Little wooden hobbit huts that, as we are told, constitute an alternative living environment? Quilts? Isn’t that just too cute? Nevertheless, there is a potential conflict to be found between Husky’s exhortations to lead a simpler life and the nearby installation’s stressing of the reality of billions aspiring to status consumerism. Ironically, the work in question, by the Rio Babe International duo, also takes the form of a habitable structure, this time a fantasy shack with all kinds of kitschy images featuring luxury cars, legendary tourist attractions, sexy ladies and bling. The piece does not in any way look expensively produced though, it wants more to imitate a vision of chic and beauty as filtered through poverty. I’m reminded of M.I.A.‘ s “XXXO” video, which strives for a similar effect with its tacky web animations. Rio Babe flirt with the signifiers of the so-called “global ghettotech” (dance music coming out of poor communities, especially from the global South), even including a music video in that vein. A similar bright and garish aesthetic is exploited by Robert Minervini in his huge paintings, redolent of early 90s computer graphics, but the “new age” spaces he depicts seem built to serve as a dwelling for a totally different kind of creature: a yuppie uber-hipster. The ridiculousness of those living quarters makes me think of DIS Magazine‘s brilliant and cynical “Evolved Lifestyles” column. 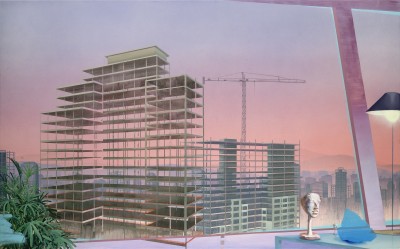 A curious cluster of works is as removed from the above concerns as possible, focusing on what I would call the inscrutability of nature. Sean McFarland’s photographs are very dark and exhibited in a sepulchral dark space so as to render the represented landscapes mysterious. Richard T. Walker’s nearby video installation presents the artist as an outsider in a desert landscape. The most interesting of the pieces in that group is an animation by Ranu Mukherjee which features a desert being devoured by oil. I wonder, did she read Reza Negarestani’s novel Cyclonopedia, where oil (the main character) possesses its own intelligence? 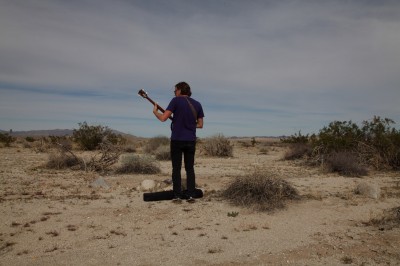 Overall, I do not hold anything against any of the works or their creators, most pieces would stand fine at any other exhibition. However, it wouldn’t do the Bay Area Now triennial any bad if the organizers decided not to eschew pain, conflict and uncomfortable questions, and invited at least a few artists that are seriously able to raise hell. Downstairs, in the YBCA’s “Room for Big Ideas,” I wrote on the blackboard: please more angry art next time.