The dreaded lockout that threatened to shorten the NFL season ended without any significant damage. The owners and players reached a deal in late July, after nearly 5 months of heated negotiations to preserve the entire 2011 regular season.

Now, after all of the lockout drama and an incredibly boring preseason, the 2011 NFL season is upon us. The rosters have been trimmed down, the final cuts made and all 32 teams are now preparing to begin their quest to hoist the Lombardi Trophy in Indianapolis next February.

Let’s take a look at the three biggest games of the year and why their impact is so great. 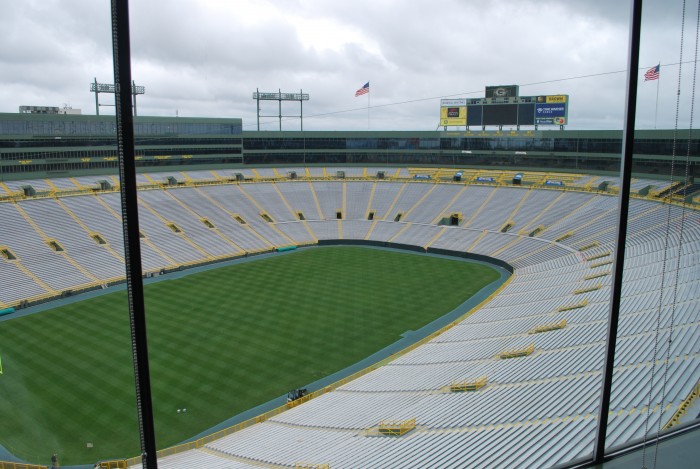 The Green Bay Packers will look to repeat as Super Bowl Champions, a tough task that has only been accomplished eight times in NFL history. But the Packers will certainly be in good hands with Aaron Rodgers, who has emerged out of Brett Favre’s shadow to become one of the top quarterbacks in the league. The defending champs, who will have a target on their back throughout the year, will be tested right away in this opening game of the NFL season.

The New Orleans Saints, who themselves fell short last year of defending their Super Bowl XLIV title, are an offensive juggernaut and one of the top contenders in the NFC. The Saints are looking to put last year’s embarrassing first-round exit from the playoffs in their rear view mirror. In the offseason, the Saints said goodbye to one Heisman Trophy “recipient,” Reggie Bush, and replaced him with another Heisman winner, Mark Ingram. The rookie running back will have to carry a big load to help Pro Bowl quarterback Drew Brees lead this Saints team past the Packers, in a game that could very well determine home field advantage in the playoffs.

Week 2 offers another meaningful game very early on in the season. The Atlanta Falcons, led by quarterback Matt Ryan, are coming off an impressive 13-3 campaign. However, the Falcons fell short in the playoffs, getting smoked by the Packers in the Divisional Round. The Falcons have a tough schedule early in the season, facing playoff teams in four out of the first five weeks. How they get out of the gate could determine if they can survive in a very good NFC South.

In his first season back in the NFL last year, Michael Vick reminded us all how exciting he is and what he is capable of. The Eagles made him their franchise quarterback and signed him to a six-year, $100 million deal in the off season. That wasn’t the only big move for the Eagles, who also brought in Nnamdi Asomugha, considered by many to be the top free agent available. Asomugha will help solidify an already strong Eagles defense.

These two teams, playoff teams a year ago, will almost certainly be playing in January again this year. This game could be another potential playoff match-up.

Ben Roethlisberger may not get the same respect that Brady/Manning/Brees do. But he’s won two Super Bowls and almost led his team to another last year. With the emergence of speedy wide receiver Mike Wallace, Roethlisberger could break into the elite class of quarterbacks this season. This duo, along with an intimidating defense, could be the Pittsburgh Steelers‘ ticket to another shot at a Super Bowl.

Tom Brady and Bill Belichick always make the New England Patriots relevant. They added a couple low-risk, high-reward players in Chad Ochocinco and Albert Haynesworth to an already deep roster. With an improved defense, this Pats team has a real chance to be elite.

This potential AFC Championship game match-up will be played just before the halfway point in the season, and will serve as a good barometer for where these teams stand after seven weeks of football. Whoever wins this game could gain control of the home field advantage race and will certainly pick up momentum heading into the second half of the season.

There used to be a time when picking the Patriots to win the Super Bowl was a safe bet. It’s definitely not a safe bet this year, but the Patriots have as good of a shot as any team out there. While they certainly have their work cut out for them, expect Tom Brady to be standing on the podium in Indianapolis next February, covered in confetti and holding his fourth Lombardi Trophy. 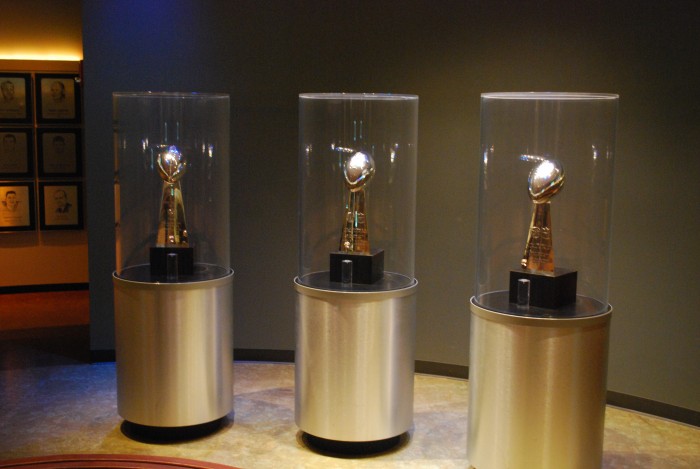 The Packers Super Bowl trophy room before adding their 4th title earlier this year. Will they repeat, or will the Patriots indeed be winning their 4th this season? Photo by Michael Brown.