Were you totally sad last year when you found out that Love had been canceled? If you were, be prepared to get crazy because Love is making its comeback. LovEvolution is moving from San Francisco City Hall to its new location, the Oracle Arena & O.Co Coliseum parking lot. Be there on September 24 if you don’t want to miss one of the greatest events in the Bay Area! 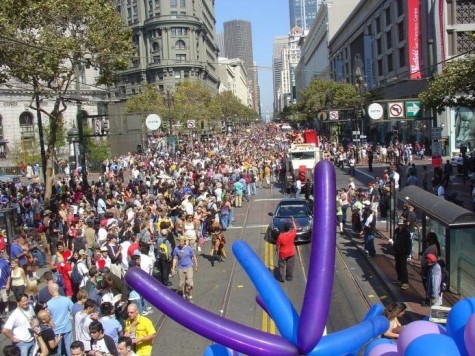 Here’s some background info: LovEvolution was inspired by the Love Parade Festival, a huge music event in Berlin that originated in 1989. This parade was shut down in 2003 by German authorities and moved to San Francisco in 2004, when it became known as LovFest. In 2006, the party returned to Berlin but kept going in the foggy city to the delight of California’s partiers, and the event eventually changed its name to LovEvolution 2009. But in 2010 only an unofficial celebration occurred in Ocean Beach, since the parade was cancelled due to concerns regarding overcrowding.

LovEvolution is finally back in full force this year. The Oracle Arena & O.Co Coliseum will provide much more space so everyone can safely enjoy every single beat.

Supported by many non-profit organizations like Access Women’s Health Rights Coalition, Friends of the San Francisco Public Library and NextAid, this festival is about so much more than just music. LovEvolution wishes to broadcast a beautiful message of diversity, tolerance, passion, respect, unity, peace and love to anyone who loves dancing to electronic music. They want to use “the power of dance, the power of music, [and] the power of community” to gather people together and motivate them to act better. 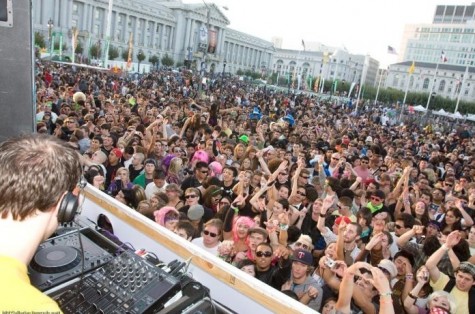 This much-anticipated event will take place on two stages, and will introduce you to local and international talent. On the main stage, you will be able to see The Glitch Mob, Pendulum, The Plump DJs and Isiah Martin. On the chill second stage, you will enjoy Marques Wyatt, Jason Bentley, Rafael De La Cruz, Jimmy Bell and many others. The lineup is loaded with deeply electronic and outrageous vibes.

LovEvolution will feature eight hours of non-stop music from 12pm to 8pm, which is still not enough for some. Don’t worry, because the party definitely doesn’t end at 8pm. If you are still alive after eight hours dancing, get to the Oracle Arena for After, the official LovEvolution after party, which will be next door to the Oakland Coliseum. The stage will welcome performers such as Moby (DJ set), Laidback Luke and Markus Schulz, as well as Gareth Emery, Dash Berlin and Blake Jarrel. It is hard to imagine how awesome the party is going to be, and it’ll be even harder for the attendees to describe it afterwards. You don’t want to miss out!