By GILLIAN HAMEL
Hong Kong and San Francisco share quite a few parallels as cities–they’re both beautifully situated on the coast, culturally progressive, and liberal when compared to their mother countries. So, it shouldn’t be very surprising that the San Francisco Film Society decided to host a Hong Kong Cinema festival this coming weekend, September 23-25. The sleek and modern New People Cinema will be screening seven films recently released from both internationally renowned and up-and-coming Chinese filmmakers, in addition to what is sure to be an incredibly fashionable opening night party in New People’s SUPERFROG Gallery on Friday night, featuring a bevy of hors d’oeuvres and local California wines. Tickets to the party are limited and likely to sell out, so it’s a good idea to buy them in advance.

While we Westerners are probably most familiar with Hong Kong film from the action-packed thrillers by directors like John Woo and Stephen Chow (as well as the many martial arts stars that have called the city home), there’s been a quieter but equally spectacular upswell of more human dramas—the best-known of these directors is probably Wong Kar-wai, who is responsible for two of my all-time favorite films, Chungking Express and In the Mood for Love. While not all of the directors featured at this weekend’s festival have that kind of Hollywood pedigree, they’re sure to increase Western recognition and acclaim for Hong Kong films that span the full range of your cinematic taste buds. Here are the three films I’m most excited about: 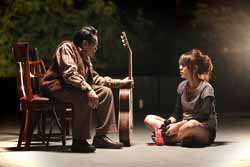 The weekend aptly kicks off with a film that centers on both Hong Kong and San Francisco, exploring the consequences of leaving home and what “home” really means. Merry-Go-Round interweaves the parallel narratives of Eva, a successful San Francisco business owner who returns to Hong Kong to attend her grandfather’s funeral, and Nam, a young woman who leaves San Francisco to be with a man she meets on the Internet. A meditation on beginnings, endings and the endless possibilities of changing one’s life, this gently paced, beautifully scored observational drama is sure to embody all the things I’ve come to love about contemporary Hong Kong cinema. 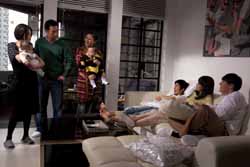 Part romantic comedy and part surprising feminist drama, All About Love explores the relationship of two female lovers who reconnect after they both become pregnant. As the film expands upon how each woman found herself in her current situation, the narrative ranges from the playful to the political, depicting the discrimination that Anita suffers in her workplace and the semi-serious hypocrisy Macy encounters from her lesbian friends on account of her bisexuality. A circumspect and occasionally heavy examination of gender and sexuality, All About Love draws yet another parallel between San Francisco and Hong Kong in both cities’ regard for the importance of freedom and open-mindedness in matters of love. 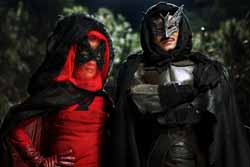 What Hong Kong cinema festival would be complete without at least one over-the-top martial arts flick? Of course there are several throughout the weekend, but none quite as nuts as Mr. and Mrs. Incredible. Think the orphaned lovechild of Scott Pilgrim and Kick-Ass found and raised by Kung Fu Hustle. I actually caught a preview of this film the last time I was at New People Cinema and knew right away I’d have to see it. Following the story of superhero couple Flint and Rouge who, despite wanting to just settle down and raise a family, can’t seem to stay out of trouble, Mr. and Mrs. Incredible looks to be filled with fantastic action sequences that play on comic book and video game tropes from both sides of the Pacific.

Also showing this weekend are City Under Siege, Punished, Echoes of the Rainbow and Don’t Go Breaking My Heart. Check the website for showtimes and ticket sales.

Merry-Go-Round at the Internet Movie Database

All About Love at the Internet Movie Database

Mr. and Mrs. Incredible at the Internet Movie Database