“I haven’t danced that hard since 2009,” one friend told me the day after a group of us had gone to the Mighty to see fidget house extraordinaires, Crookers. The Italian maestros, Bot and Phra, certainly ended their U.S. tour with quite the bang.

My friends and I entered the Mighty when Nisus was about half-way through his set. About a week prior, he opened up for SebastiAn, another high-profile DJ act, and this night, Nisus again proved to be worthy of such a slot and then some. Setting up shop right up at the front of the stage, I also had a good view of the crowd behind me. It was pretty darn evident that Nisus was working the decks with some fierce frenetic energy, and had the crowd well in his hands. 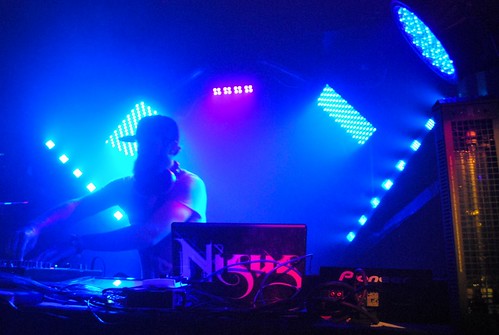 Nisus at the Mighty. Photo by Joey Pangilinan.

While getting some fresh air outside after his set, I noticed Nisus was also outside talking with friends and other club crawlers. I took a brief moment to talk with him, and he was very gracious and grateful when I congratulated him on a great set, not just on that night, but the previous week as well.

For when Nisus left the stage, he left the crowd in high spirits, which meant everyone was primed and ripe for Crookers to take over and own the night, which is exactly what they did. Dropping their biggest club bangers, Phra and Bot destroyed the dancefloor and the crowd dancing on it with their massive beats as if they were bombs. It had been well over two years since I had first seen Crookers. After seeing them again this past weekend, I must say that those two years were two years too long. When they also dropped their remix of Kid Cudi’s “Day N Night,” I reminisced briefly on how much fun I had during that Coachella set.

I spent the majority of their set at the front of the stage, and had to leave that area for water and air; it was so steamy and sweaty up there. After properly re-hydrating myself, I was ready for more, and my mates and I found a spot on the dancefloor with a little more room to move and groove.

Like every other Crookers fan in the house, I shouted and danced with maniacal excitement when I heard “Knobbers,” “Il Brutto,”” “Il Cattivo.” Words cannot convey just how much bliss I had in my heart when the Italian duo pumped their remix of “We Are Prostitutes” through the sub-woofers my friends and I were dancing next to. With gloriously glitchy and distorted beats and basslines, the track is simply dirty and filthy. It is exactly why I love fidget house.

By night’s end, Crookers had put on an amazing show. I left the Mighty with all of my limbs completely exhausted because I had danced so hard.