This week, the Alternative Press Expo (APE) takes over San Francisco’s Concourse Exhibition Center. Comic-Con International, the same fine folks who put on San Diego Comic-Con (SDCC) and WonderCon, also organize APE. Bigger, more high-profile cons like SDCC attract the glitz and glamor of Hollywood as well as video game publishers, but at the end of the day, APE is all about comics. Indie and alternative comics, that is. 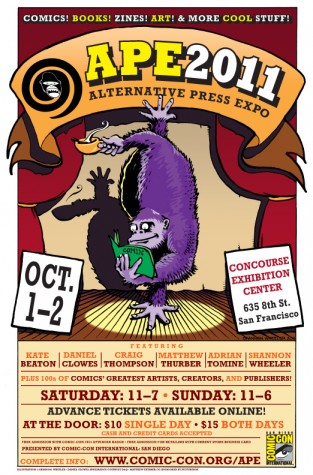 Marvel and DC Comics don’t really have a presence at APE since they are the two biggest comic book publishers in the industry, and far from what is alternative. What you will find are indie publishers and independent comic creators exhibiting tables full of their work to show and sell. A lot of these works push new ideas and new concepts.Since it is a small and intimate con, it doesn’t feel as hectic and frenzied as the bigger ones. I love the laid-back atmosphere in which I can find new comics to read, get to know new creators or meet up with old friends in the industry.

A few choice things to look forward to at this year’s edition of APE:

Writers Old-Fashioned, a collective of indie-comics creators local to San Francisco, will have their usual table. Writer Jason McNamara and artist Rahsan Ekedal will premiere the first issue of their new series, Short Hand. The first issue is said to be a stand-alone noir tale with a twist.

Southern California’s Conjoined Comics team of Stephanie Lantry and Carrie Smith will also be in the house. They will have copies of their comic To the Power Against and mini-comic Emogician. The tagline for the former is “Joss Whedon meets Stephen Hawking.” Still not intrigued? Well, shit hits the fan for our main heroine when her kitchen blows up because she overcooked her burrito in the microwave.

Comic book store proprietor James Sime will award the Isotope Award for Excellence in Mini-Comics on the night of October 1st at APE Aftermath. Look out for specialty cocktail drinks all night long with Brett Warnock, Co-Publisher of Top Shelf Productions, who will be tending the bar for the first hour. Isotope’s in-store events with comic creators feel more like a party rather than just a regular ol’ signing. Since Sime and his staff love comics as much as they do, and the people who create and read them, this is one of the biggest events that Sime and company throw all year. APE weekend would not be complete without Isotope Comics’ APE Aftermath.

Like comic books, too?! Give us a shout and let us know if you’re going to APE this weekend as well. Let us know what you think! Follow us on Twitter and like us on Facebook to give us a shout. You can also stay on top of exciting events from around the world by downloading the eventseeker app for iPhone, Android or Windows.