By ADAM SAWYER
Tuesday, September 27. San Francisco’s Bottom of the Hill. A night of musical reverence.

Encased in a Bay Area Indian Summer sultriness, the aptly named bar/live music venue at the foot of Potrero Hill hosts a night of performances by Painted Palms, Pepper Rabbit and BRAIDS. (Read an interview with BRAIDS’ Raphaelle Standel-Preston here.) Outside, the heat mixes with the fog in the air and the quiet of the neighborhood, adding a sense of mystery to the evening. I even feel as though I’m intruding on a well-kept secret as I approach the door and encounter a couple of BRAIDS members having a curbside chat, a fitting preview of the bar’s comfortable atmosphere. An air of relaxation reigns as the crowd begins to funnel into the room’s soft blue and red lighting, making for a full audience. And it’s not even the middle of the week! That’s what we call “winning.” 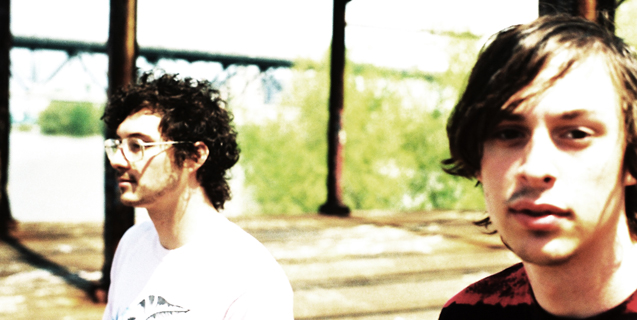 The music starts a bit after 9pm with a blend of guitar, synth and vocals as Painted Palms’ Reese Donahue and Christopher Prudhomme take to the stage in anonymity. The group’s second song of the night, “Falling Asleep,” adds drums to the mix along with another band member, building an incessant sound that refuses to leave. It’s not until an audience member shouts out “Who are you?!” before the fourth song that the lead singer/guitarist introduces the band, adding that he’s excited to be here because the group is from good old San Francisco. At one point during the set, the singer hands his guitar to his cousin (and synth specialist), allowing him to focus solely on the impressive control he has over his voice while the electric axe enjoys a much livelier tickler on its strings. The result leaves me in awe. The strength and timidity combined in his voice is unique and perfect for the experimental/synth pop tone. 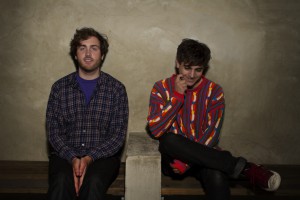 A break and a shaky sound check bring Pepper Rabbit to the stage. The lead singer and keyboardist, Xander Singh, asks the crowd if he has time to grab a beer, to which there’s a resounding “Nooo.” He grabs one anyway. He’s in training to be a star after all. Singh and Luc Laurent begin with “Lake House,” the first track on their album Red Velvet Snow Ball – a soft but forceful start. The duo (along with the addition of a drummer) plays most of its album, which highlights a big and full sound along with shots of frenetic energy. This playful vitality sits center stage in the live rendition of “Allison.” An enchanting keyboard repetition and cute sliding vocals attempt to wind themselves around an elusive drum beat. “Murder Room” sees a bright medley of syncopated drums, endearing lyrics and a walking bass line, breathing yet more life into the room. The psychedelic pop group’s charming yet eerie set is followed by BRAIDS’ somewhat lengthy sound check. 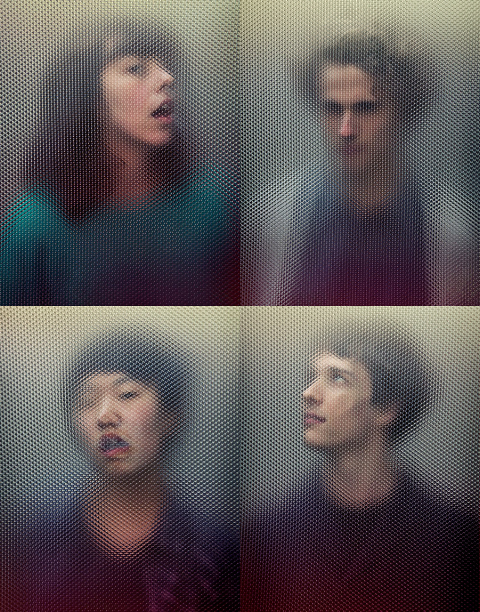 BRAIDS. Photo courtesy of Tell All Your Friends PR.

The members take the stage at a few minutes before 11:30pm. When I see Raphaelle Standell-Preston (guitar, lead vocals) take to the scene, I find that I’m even more excited than I thought I was. Joining her are Katie Lee (keyboard, vocals), Austin Tufts (drums, vocals) and Taylor Smith (samples, percussion, vocals, bass, guitar). The crowd is immediately in love after the first song and isn’t afraid to show it. Cheers and screams all around. “Glass Deers,” the longest track on the band’s newly released album, Native Speaker, makes its appearance, leading in with its otherworldly din and chimes until it quiets down and Raphaelle’s voice takes its first demure and regulated step. The whole group–from keyboard to drums, guitar, voice, samples and drums–shines with a melodious and striking sound, but it’s the lead vocals that flare brightest. As the song unfolds, so do the layers of the multi-talented artist’s range and expression. No one can help but be captivated and I am left inspired by the pure power of the song as performed live. There’s no mistaking “Lemonade” as Raphaelle picks out the fast and flirtatious guitar line, which is impressive, on top of nailing the fervid vocals. Throughout the performance Katie truly owns the keys on top of offering up her voice in playful harmonies and duos with the lead singer. Even Austin, taking a break from the drums, snags his chance for a mini lyrical solo to the audience’s delight. “Plath Heart” brings its frisky pizzazz as a sort of punctuation amid all the more lengthy, instrumentally saturated pieces. The quartet has a way of creating a chorus of sound that is at once huge and humble, intimidating yet comfortable, unique yet familiar. It’s hard to put proper words to a talent that is so consistently surprising in nature. As the band plays its final note and says its “goodbyes” and “thank yous,” not a word of it is heard due to the clamor of the applause. Just the way it should be.

Let us know what you think og BRAIDS, Painted Palms and Pepper Rabbit. Stay on top of the bands’ upcoming tour dates by tracking them on eventseekr.com.Let us know what you think! Follow us on Twitter and like us on Facebook to give us a shout. You can also stay on top of exciting events from around the world by downloading the eventseeker app for iPhone, Android or Windows.