For Americans in the 21st Century, the concept of “punk” is unbelievably stale, but in some other parts of the world, not perverted by the whole “suburban mall punk” culture, that word still signifies promise and vitality. Late 1970s punk is what inspired Congolese choreographer Faustin Linyekula to create his new piece More, more, more… future, which was first shown in San Francisco on September 29th at the YBCA. Linyekula and his team, including the prominent guitarist Flamme Kapaya, attempted to combine punk’s scorched-earth approach and political urgency with the culture of ndombolo, based around a very sensual and hedonistic Congolese pop music style. 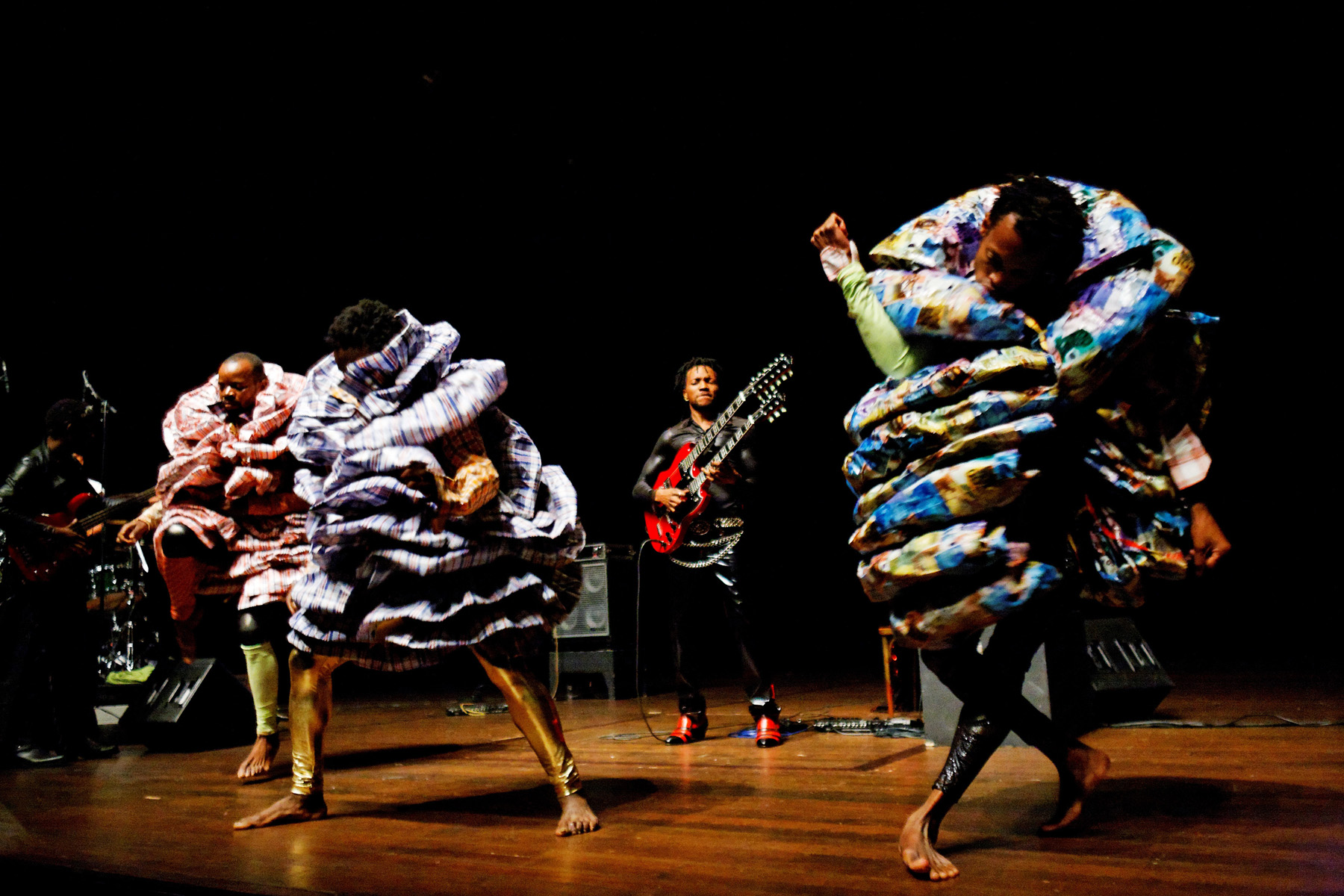 One of the things that true punk is supposed to do is subvert the canons of performance, and this is what More, more, more… future started with. The band, with Flamme Kapaya and the lanky vocalist Pasnas dressed in eye-melting glittery outfits, came out on stage when the lights were still on and the audience members were still bickering over seats (a decidedly un-spectacular beginning, especially for a spectacle as exuberant as what Linyekula’s piece proved to be!). The musicians patiently waited for everyone to sit down and shut up, and Pasnas’s grave stare reminded us that, in spite of all the glitter, it was serious business that they were dealing with. The songs written for More, more, more… future are based on poems by Antoine Vumilia Muhindo, Linyekula’s childhood friend who was imprisoned for political motives and sentenced to death, but escaped and now lives in hiding. The narrative unfurled to his powerful words of disobedience and discontent, delivered with ferocity by Pasnas and the other vocalist, Le Coq.

The grievances of his home country and Africa in general are of course the central concerns of Linyekula’s piece, but I prefer to view it in a more “universal” framework, as a story about how people and cultures progress from naiveté to a depraved state, with hope for regeneration at the end. The three dancers, Linyekula himself as well as Papy Ebotani and Dinozord, appeared when the audience was finally silent, and their movements and gestures seemed to refer more to the poses of Matisse’s bathers than to any psychological state known to man. Soon enough they put on their unforgettable costumes (by Malian designer Xuly Bët), cabbage-like soft sculptures seemingly fashioned out of discarded clothing. My husband later said that they made him recall the expression “dead man’s clothes,” which he heard on a trip to Niger. When used clothes donated by Westerners get shipped to Africa, the people there just cannot believe that the original owners of the rags are still alive. In Africa, with poverty rampant, you part with your clothes only when you’re dead. The costumes also looked like ruffled spheres; my friend Lucia suggested that they might refer to colonial-era dresses. Both points of view prompted the guess that the costumes signify complete cultural dependence. Moreover, they make a person look like an object. When the band finally crashed on us with its fierce Afro-funk, the dancers made sure that their movements spoke of abandonment–total subjection to the music. A particularly eloquent moment was when one of the dancers was bouncing up and down in his costume, which created an impression that the whole body was violently vibrating. That “chapter” of the performance cast the dancers as naïve, childlike, dependent beings that have not developed a personality yet. 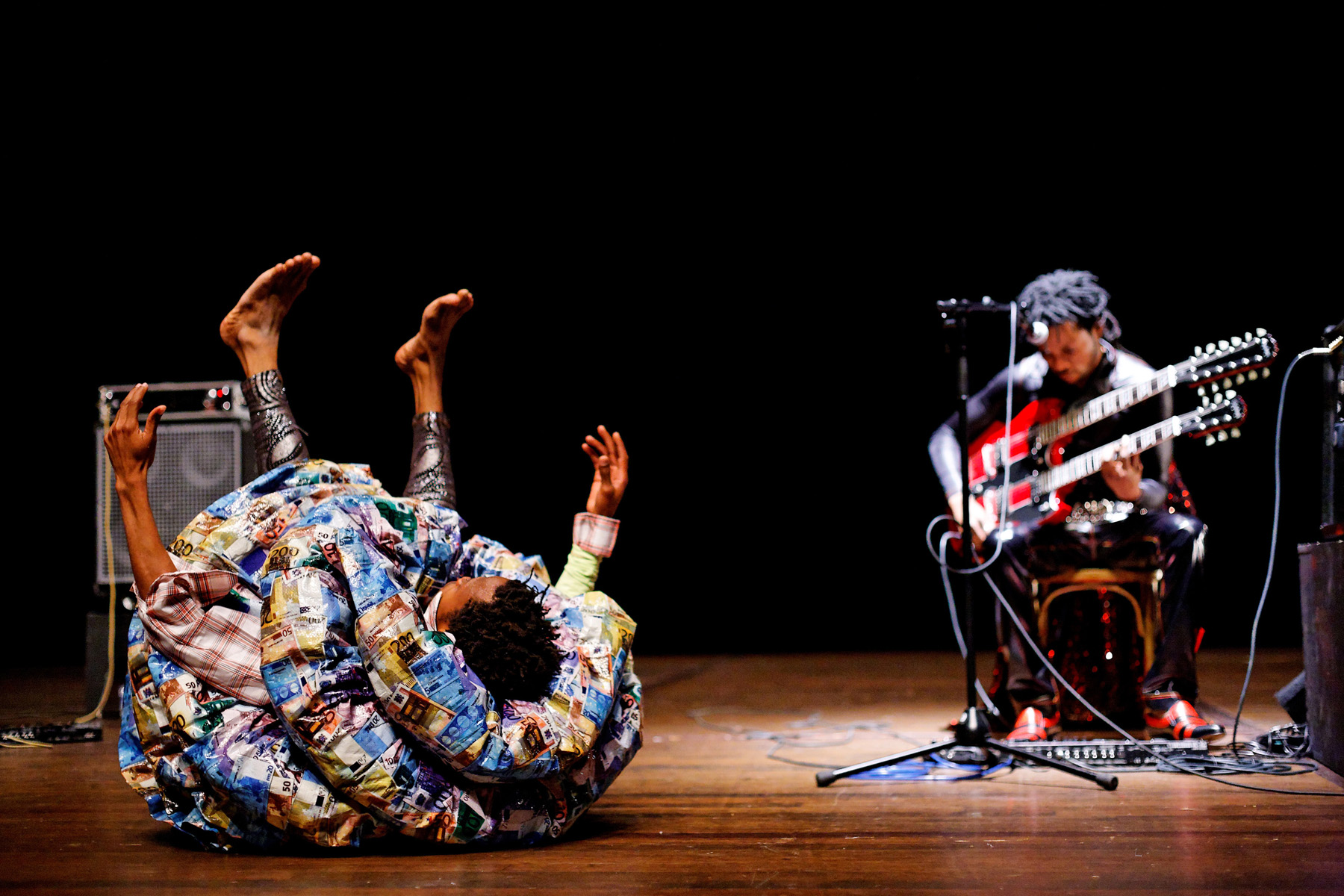 That’s why I was kind of happy when they shed their “cabbages,” even though looking at them was insanely fun. Next was the characters’ sexual awakening. To the crystalline sounds of Kapaya’s guitar the dancers performed a set of extremely homoerotic movements. Finally, one of them screamed “J’entends!!” (“I hear!!”) which proclaimed the beings’ attainment of speech and the ability to actively, not passively, respond. And then they discovered the joy of human interaction. First only physical interaction–at one moment, the bodies of three men intertwined into a common body –then the happy interaction within a community. All of the performers (the band members too) formed a circle where they danced, shouted, sang, and hugged, like in a hippie paradise. Happy ending?! Sorry, no. You cannot party forever. The hippie paradise turned into mayhem, when the performers, who had all apparently inhaled an obscene amount of male hormones, started attacking each other. Death and grief ensued. But, as I said earlier, the end was not without a glimmer of hope. The performance concluded with all of the men sitting down in front of a screen (the dancers put back on their cabbage costumes) and watching a video where pensive shots of the sky alternated with images depicting figures of importance to the African continent.

Faustin Linyekula and his team will be performing More, more, more… future for two more nights, September 30th and October 1st. As you’ve probably understood by my excited description, it is tremendously enjoyable and you should go see it. And if you go see it and don’t want to get at least a few African rock albums afterwards, it means you’re probably dead.