Yes. You read that title correctly. This means that a. there is a sport called wife carrying and b. it is so popular that North America gets its own championship. True and true. The North American Wife Carrying Championship takes place every fall at idyllic Sunday River Resort in Newry, Maine. This year’s festivities take place on October 8th, with the winner of this event going on to the World Championships in Finland. From there, they will compete for the prize of the wife’s weight in beer. Also true. 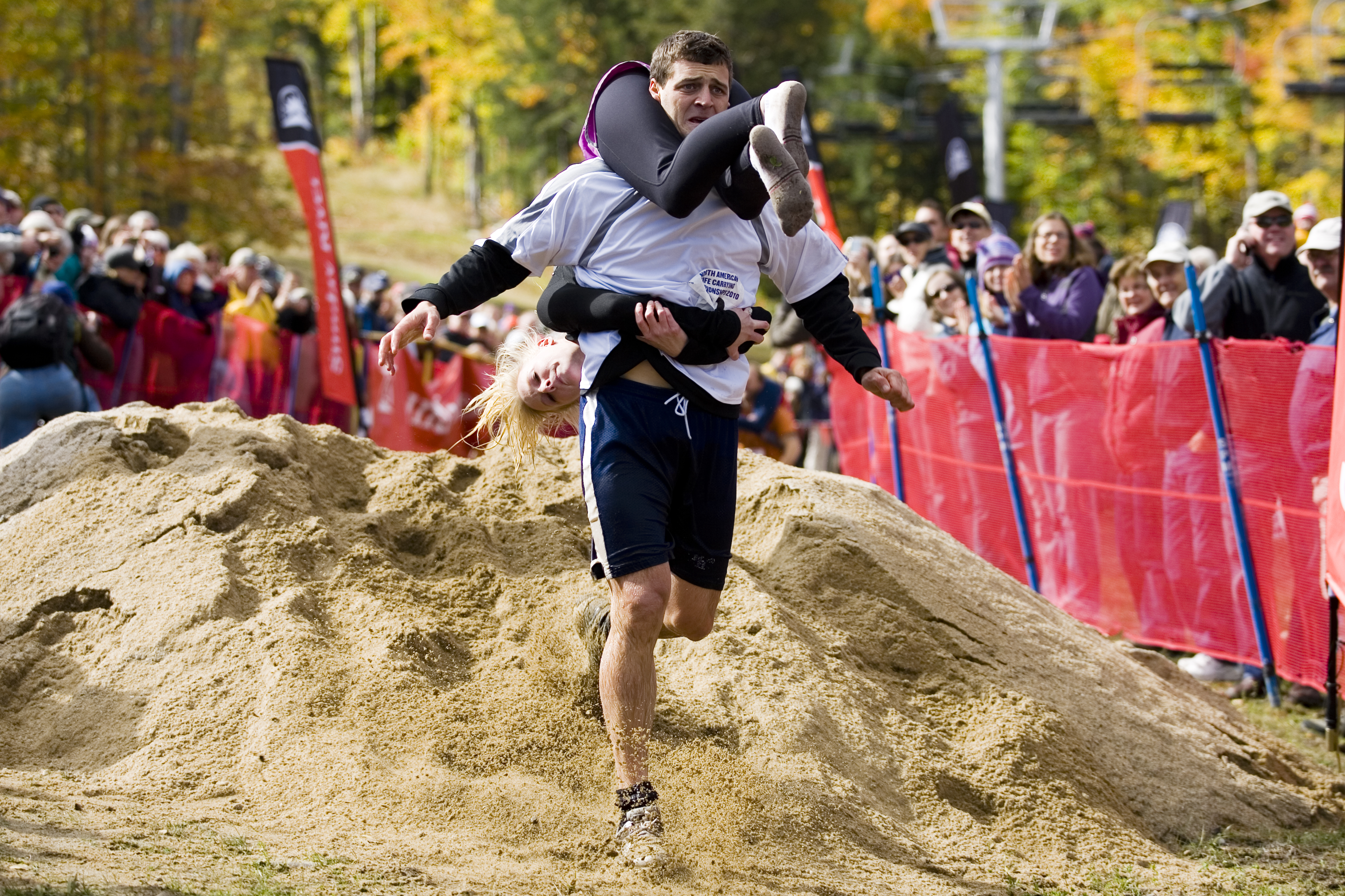 Let’s start with the basics. The sport of wife carrying involves couples racing through a 278-yard obstacle course, which includes a water component to splash into, logs to hurdle over, and hills to race up and down. The winner is the couple with the fastest time. Oh, and, the man must be carrying the woman–and if he drops her (making her a “widow”), there is a time penalty. Before you start wondering, the women don’t literally have to be these men’s wives. And, yes, there are cases of women carrying men, but not many. The most popular ways to carry the “wives” are the following: the fireman carry (over the shoulder), piggyback (you got this one), and the Estonian carry. The Estonian carry requires a bit of description and a stretch of the imagination: the woman is upside down with her arms hugging the man’s waist and her legs draped over his shoulders, thus freeing up the man’s arms for balance. All the past winners of the North American Championship have utilized the Estonian carry.

Now, where did this amazing sport come from? Easy answer: Finland. But, how exactly the Finns came up with wife carrying is open for conjecture. There are two lines of thinking, both inspired by the 19th-century robber, Herkko Rosvo-Ronkainen. The first explanation is that Rosvo-Ronkainen and his gang of robbers would go to nearby villages, throw men’s wives over their shoulders, take them back to the forest, and marry them. The other explanation is that Rosvo-Ronkainen was a bit of a drill sergeant and would have his men run around with large sacks on their backs to get them fit for thieving.

Personally, I hope that the first story is the true one. It makes me imagine these thieves back at home in the forest with a gaggle of stolen wives, slowly realizing the mistake they had made. I mean, how did they not see the inherent flaw in that plan? Who wants more than one wife? (Don’t worry. I am a wife, so I can make that joke.) And, if the second idea is true, that means that somewhere along the line, someone made the mental jump of large sacks = women = wives. Come on, that’s a bit offensive. So, let’s hope that Rosvo-Ronkainen and his gang were just good old fashioned wife-robbers.

If the history isn’t enough to motivate you to check out this event, here’s another reason: the competitors are strong, athletic and take the sport seriously. This means that the North American Wife Carrying Championship is sure to be a unique mix of athleticism and fun. I don’t know what could be better.

Do you like Wife Carrying? How about Wife Thieving? Tell us about it! Let us know what you think!