By GILLIAN HAMEL
Here’s something you might not have guessed about hyperliterate poetry nerds: we love hip-hop. We can cut it up for hours about the sociopolitical overtones, boast poetics and flow metrics of rap artists from Kanye West to Mystic. And while I can certainly discuss Odd Future Wolf Gang Kill Them All’s show at The Warfield last Friday in those terms, let me open with this instead: This. Show. Was. BANANAS.

I arrived a bit late, which may have been a blessing in disguise—I’ve since read elsewhere about door lines snaking through the Tenderloin long before the show actually started. I was initially surprised to find that the beer lines were comparatively nonexistent, but the mystery was quickly solved—I’m pretty sure I could have counted the over-21 crowd on both hands. The pit was a sea of adolescent energy and craziness, so I opted for the balcony instead, and found a spot to stand just as Odd Future’s DJ, Syd the Kyd, was segueing out of her opening set and chants of “Wolf! Gang! Wolf! Gang!” began to fill the auditorium. Soon enough, the group’s frontman, Tyler, the Creator emerged, followed quickly by Hodgy Beats running onto the stage and front-flipping right into the crowd, and that about set the tone for the evening. 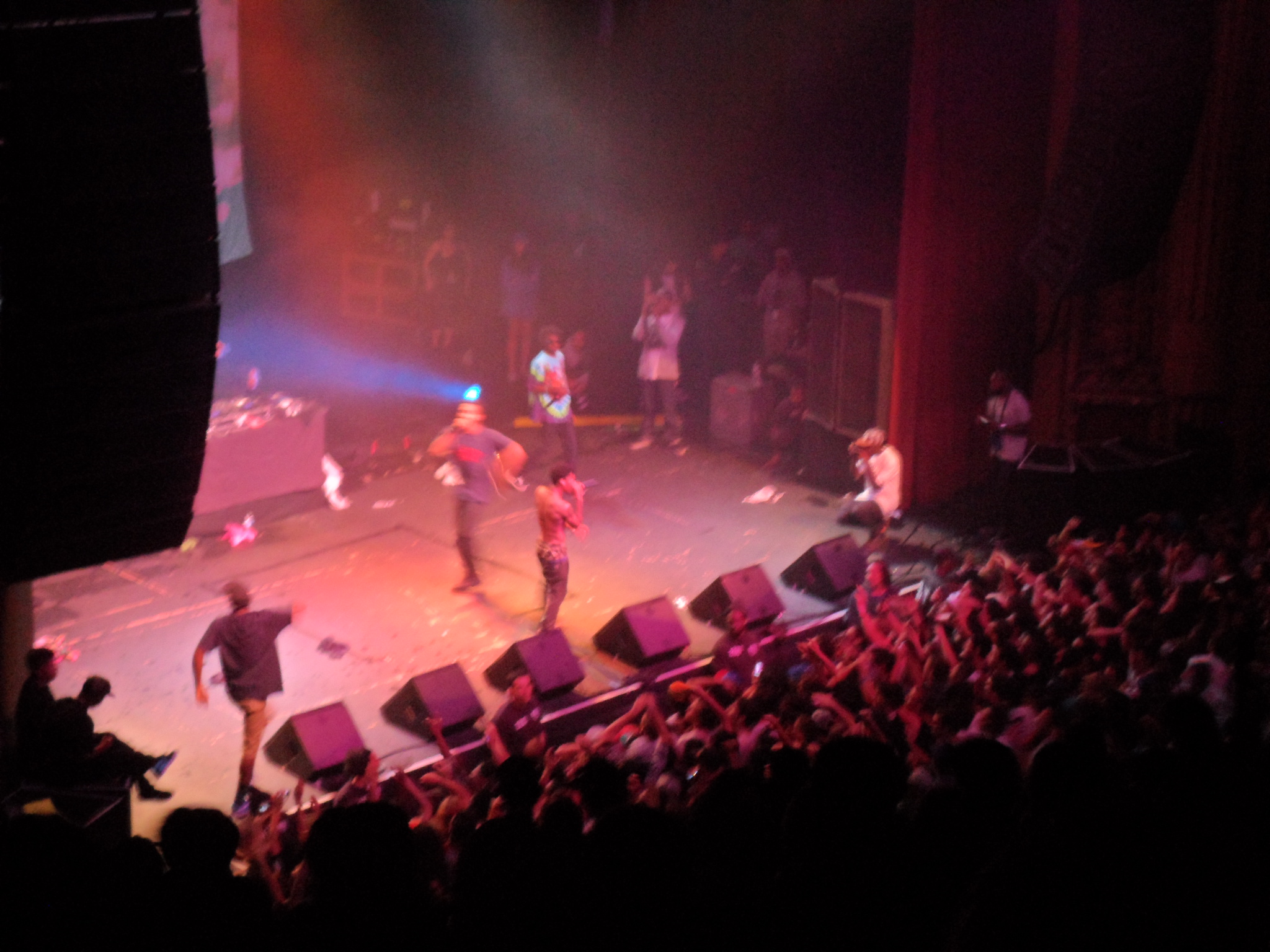 I often think the sound balance at the Warfield could use some tweaking, but this was barely even a concern worth noticing. Instead, I was immediately swept up by the punishing beats, forceful lyrics and abounding youthful id, from the mosh pit/fight club taking over the floor to the constant barrage of objects thrown on stage: mostly T-shirts and shoes, and, apparently a regular thing for OFWGKTA, a few bras. All this was driven by the boundless energy of the emcees, who thrashed and gyrated around the stage with more enthusiasm than I see in most punk rock shows. At one point Tyler cautioned that the group’s voices were starting to fail from the rigor of touring, but this didn’t stop them from tearing through what seemed like a highly improvised set, bouncing song ideas around and showcasing each artist’s repertoire generously. Mike G might’ve had the best performance of the night, his focused, incisive flow acting as a kind of center to the madness on and around the stage (including his own neon Wayfarers and ridiculous tie-dyed T-shirt). Tyler was the obvious counterpoint to this, delivering his defiant, hubristic verses in a kind of guttural shout, throwing his whole body behind every word and identifying and inciting mayhem wherever he could. (At one point, he encouraged fans to fight for a bottle of water he was about to throw into the crowd.)

And while I’m on the subject of words, I’d better address the elephant in the room. Of course OFWGKTA have become infamous for their violent, often sexist, arguably homophobic material. Is this sometimes uncomfortable for socially conscious, reluctant feminists like me? Yes. Did I care on Friday? Honestly, not really. The thing about Odd Future is that their confrontational nature is, to be sure, a kind of live-action trolling, seeing how far they can push the boundaries of acceptable behavior—but it does seem to come from a real place of adolescent rage and depression that is rampant and difficult to ignore. In embodying some of the ugliest and most destructive fantasies of American youth, OFWGKTA also points to those fantasies’ even uglier roots, all the while winking at their nature as fantasy. (The literary critic in me is screaming “postmodern condition!”) The group’s rather mystifying tour mascot, Sharkcat, actually says quite a lot about them—presiding over the antagonistic lyrics and gunshot sound effects from an enormous cloth backdrop with its cartoony disembodied head and barely demonic multicolored eyes, it’s half internet meme, half commentary on this generation’s penchant for pastiche and appropriation, and overall an assuredly not-scary underscore to a group that, in the eyes of concerned parents, must make Marilyn Manson look downright cuddly.

Besides, it’s not as if Odd Future is a total guys’ show—while the pit was of course composed mainly of sweaty, hyperactive boys, there was a formidable percentage of young women present as well. Certainly the parade of washboard abs and general shirtlessness might have had something to do with it, but Tyler also took a moment to thank the ladies in the pit for their bravery and endurance (not without also mentioning the endurance of their breasts, but OK). It was a heavily ironized moment, to be sure, but also a nice gesture from a group that has been accused by critics of fetishizing shock value and rage. And for all their violent alpha-male posturing, it’s also just that—a performance, a celebration of teenage liberty, a spectacle of reckless fun. But don’t blame me for feeling just a little bit topical as I threw my fist in the air and shouted along to the final words of the show: “I’m fuckin’ radical—I’m motherfuckin’ radical.”