It’s been nearly a decade since the 2002 season, the year that author Michael Lewis wrote about Oakland Athletics’ General Manger Billy Beane and his strategy to find overlooked and undervalued players to fill voids in the A’s low-payroll roster.

The concepts in Moneyball: The Art of Winning an Unfair Game have become a lightning rod of controversy over the years, setting up a somewhat fictitious battle over the best way to build a ball club, between the traditional method of scouting and more recent statistics-driven analysis.

Round two of this spirited debate has surfaced with the release of the movie version of Moneyball, which focuses on the evolution of Beane’s theories and his motivation for putting them to use. 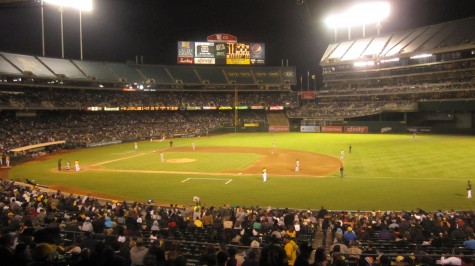 I will leave most of the critiquing of the movie to the professionals, but I will say that the most enjoyable part of Moneyball is that it once again brought relevance to the Oakland A’s. Fans have had little to celebrate recently. The ownership has expressed their desire to move the franchise out of Oakland, the team has not had a winning season since 2006, and they have been almost completely ignored since last October, when the San Francisco Giants won the World Series and sucked up all the media attention in the Bay Area.

Director Bennett Miller even decided to shoot on location at the Oakland Coliseum, (O.co Coliseum) giving A’s fans a chance to be extras in the stands and relive the glory days of the 2002 season.

I was one of the lucky fans in attendance on September 4, 2002 when the A’s won their 20th straight game after blowing an 11 run lead. I was sitting behind the right field foul pole, and although it might have been one of the worst seats in the stadium, I was thrilled to be a part of history that night.

I had a slightly better view during the filming of Moneyball, when I got to play a bat boy in the movie, a position I actually once held with the Oakland A’s.

It was an incredible experience being on a movie set. I thought I had been desensitized to being around superstars, having worked in both the A’s and visitors’ clubhouse and getting the chance to interact regularly with players like Derek Jeter, Alex Rodriguez and Jason Giambi. But I quickly learned this was not the case, as I got excited from even the simplest things, like nodding and saying hello to Brad Pitt or having a brief conversation with Philip Seymour Hoffman about the soup served on the set that day.

It was amazing to witness the tremendous effort that goes into making a movie. They filmed for just under two weeks at the Coliseum for roughly 12 hours a day, totaling roughly 150 hours of shooting, yet only about 20 minutes made it into the movie. I can only imagine how long it took to come up with the remaining two hours of the film.

The experience was surreal, to say the least. Work on the film had to occur during the middle of the night so as not to interfere with the real games, so we had to get “up” and be energetic and alert after having already put in a full day’s work. Switching back and forth between 2002 and the present felt like we were in a time warp, especially when functioning on only a few hours of sleep caught in the clubhouse, and seeing the “players” from 2002 on the field only hours after the current team played took some getting used to.

The film production team wanted to make the baseball action as realistic as possible, and the “players” trained ahead of time and focused on re-creating the actual game situations. The actors, who with the exception of Royce Clayton playing Miguel Tejada, were not major leaguers but minor leaguers and college players, did a great job emulating the real players. Nevertheless, they provided some entertaining moments, and some of their gaffs, such as stumbling while running the bases and being unable to make solid contact at the plate, resulted in some good-natured laughs on the set. Actor Chris Pratt, who played Scott Hatteberg and didn’t have a baseball background, had a bit of a tough time hitting a convincing home run, but otherwise did a great job portraying the heroic game-winning moment.

The only real problem I had with the movie was the plot line of Beane needing this experiment to work in order to keep his job. Beane was coming off a 100-win season and back-to-back playoff appearances, not a small feat for a club with such a minuscule payroll. So the idea that he was on the hot seat because the team got off to a slow start was a bit of a stretch, even in a Hollywood production. But in general, the movie should prove to be entertaining for fans and non-fans alike.

Critics love to boil down the theory of Moneyball to the use of statistical analysis by the front office in determining the likelihood of player success in the major leagues in a sport dominated for years on tried-and-true player evaluation methods, such as traditional scouting, determining if a young player has a “baseball body” and players’ past success in high school. Since the wealthy teams could afford to scoop up such prospects, the A’s were forced to use other methods and other criteria to put together a winning team. The A’s have a tradition of not overspending on players (to put it charitably) yet also have fielded many winning teams throughout their long, storied history. In boiling down success to its bare components, Beane and his staff were able to find the overlooked players at less cost, such as hitters who didn’t have the high batting averages that other teams coveted, yet who got on base through walks and other means. While today, many think that Moneyball is all about On-Base Percentage, the real message is trying to remain competitive by thinking outside the box.

Even if only for a week or two, Moneyball has brought the spotlight of the baseball world to Oakland, and back to that 2002 team which won an incredible 20 straight games and the American League West Division. Whether or not it was the principles of Moneyball that propelled the A’s to a few successful seasons remains up for debate. But beyond that, Moneyball provided an inside peek into the usually hidden area of Major League Baseball, and from this perspective, anyone with even a passing interest in the game would enjoy getting glimpse into what makes the game tick.

Now the focus of the baseball world is on the League Championship Series, which will start this weekend. The American League match-up between the Rangers and Tigers will begin Saturday night. Meanwhile both spots in the National League are still up for grabs, as all four teams still have a chance to represent the senior circuit in this year’s fall classic.