By ADAM SAWYER
Take a bite out of the psychedelic beat-fruit that is Lo & Behold. Released October 11 with Cantora Records, the folky electro-pop-with-a-dash-of-rock-and-disco album follows Emil & Friends’ August 2010 release of EP Downed Economy. The EP clearly laid the foundation for the producer/mixer/musician/singer’s sound in his latest work. Although I enjoy Economy, I find the latest record to be more focused, more energetic and full of a rich resonance – a je ne sais quoi that is perhaps partly due to the mystery that enshrouds the man behind the music. 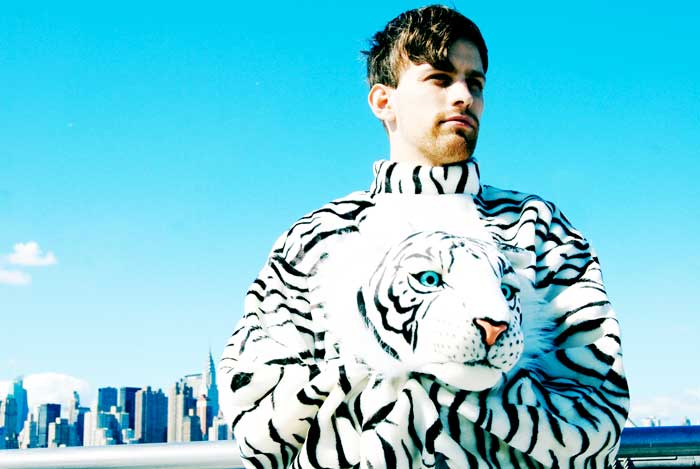 Let’s make an attempt at clarifying that cloudy image before moving on. I do know that the pop funktronic musician spent a good amount of time in Boston before moving to New York a few years ago, which is where he is currently based. Otherwise, Emil Hewitt has kept his history somewhat obscure. In interviews he is likely to answer questions about his past and where he comes from by claiming to have been born in a test tube somewhere in Europe. Hewitt seems to enjoy propagating a grey area of residence in the public eye–no right or wrong, no correct or false. His own band name is misleading: there were no “Friends” when it all started (now there is a band for performances). It’s really just Emil & Emil. At one point he obtained some press by starting rumors on actor Emile Hirsch’s Wikipedia page about “Emile” & Friends being said actor’s side project. The mixoprodumusicianer has an equally enigmatic list of artists whom he claims to be his inspirations; from Sonny Chiba and Tony Castles to Cocteau Twins, Micky Most, Smashing Pumpkins, Aphex Twin and Beach Boys. He dances to Grandmaster Flash, The Cure and Boz Scaggs. Who ARE you, Emil? (And can we be friends?) He is virtually self-taught in the production arena which isn’t something to scoff at, especially since it is his forte. Singing and playing are relatively newer talents for the musician but he has been a theater lover since high school. He isn’t new to the stage so performing isn’t exactly foreign territory, either.

The mixed bag of Hewitt’s formative influences and experience definitely come through in his music. It all adds to his ever-evolving amalgam of genres and sounds, or at least he wants us to think so. That harmonic blend is quite evident in the first released single, “Prescriptions.” It takes on a bit more folk-driven attitude than a majority of the rest of the album, opening with a pleasant acoustic guitar and airy vocals; the introduction swiftly ushers in the electric guitar and a fuller sound during the chorus. This repetition creates a few nice climaxes in the song, building up and floating back down to the acoustic strings and gentle timbre of the verses. “C.U.P.I.D” follows it up, and almost feels like a ’90s R&B track with electronic tendencies. The listener is greeted with a dirty synth beat and fake high strings. Marry that with the laid-back stylings of the singer’s ambiguous voice and ear porn is born. I want to be driving a black car all in leather down the strip whenever I listen to this song. “Rain Check” is next in line on the track list and by far the most fun shake-your-tail melody. Cue horns. Just try not to move and sing. This is good feeling pop, for sure. So we went from folk to rock, R&B and pop. Throw in some sleazy disco and funk sounds in there and we are right on our way.

Hewitt is a great mixer. In fact, his release before Downed Economy was a mixtape called Astronaut Ice Cream. Recommended. It’s a gratifying playlist of debauchery. Present in all his work are the unpredictable yet natural usage of percussion, a penchant for variety and a modest eccentricity, such as sampling video game music. Your reward for listening is a pleasant surprise that often feels inexplicably familiar. The intro to Lo & Behold‘s “Endless Waves” is even somewhat reminiscent of the opening of Tracy Chapman’s “Fast Car.” Hewitt’s medley of sounds and genres makes it difficult to make a direct overall comparison. MGMT may be the easiest juxtaposition, at least as long as Emil isn’t folking it up with acoustic chords. But where the psychedelic progressive rock band controls a more staccato feeling in its music, Emil & Friends retains a certain flow in its sound while still offering up those beauteous beats. Lo & Behold is headphone juice for your parched ears.

Let us know your thoughts on Emil & Friends. Let us know what you think! Follow us on Twitter and like us on Facebook to give us a shout. You can also stay on top of exciting events from around the world by downloading the eventseeker app for iPhone, Android or Windows.