By ALEXA DOOSEMAN
In honor of National Breast Cancer Awareness Month, we’re highlighting the Avon Walk for Breast Cancer, a fundraising event that takes place in nine different cities across the United States. To be a walker, you have to sign-up, raise $1,800, train and then walk a marathon and a half (39.3 miles) in two days. You can also participate by volunteering or just showing up and cheering on the walkers. I did this walk in 2009 in San Francisco, and one of my closest friends, Yasmin Firouzi, did the walk this past summer in Santa Barbara. To give you a sense of what one of these walks is like, I got a hold of Yasmin to have a chat. 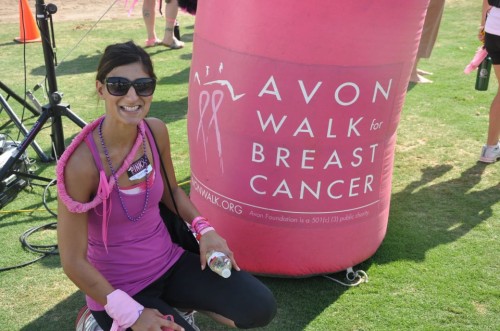 Why did you decide to take-on the Avon Walk?

Well, for me, it was two-fold. First of all, I liked the fundraising challenge. We are all so interconnected now, and I thought that it would be nice to use these social networks for good. Also, with our generation [late twenties] about to enter a new phase, with many of us having families and having more responsibilities, it felt important to do this before our lives are completely absorbed by other things. I wanted to bring attention to the risk of breast cancer now. I also thought the physical part of it would be a fun goal – although this ended up being more difficult than I originally intended. I was hoping to convince friends to do it with me, but no one was available. So, walking almost 40 miles alone turned into more of a mental challenge than physical.

[I also did the San Francisco walk on my own. When Yasmin says it makes it more of a challenge, I’ll just say that I honestly was singing to myself by mile 20 – out of delirium. It is a long time to be walking.]

Was it an emotional challenge as well?

Yes, especially the opening ceremony. There were a handful of speakers, discussing how breast cancer changed their lives. When you’re listening to these stories, you begin to see how everything is interconnected. The air around you changes as you realize how many people have raised the money and given up their time all in the hopes that we’ll find a cure. And, it has very little to do with personal experience at that moment. Instead it’s about this community forming around you. So, yes, that was very emotional. And then you have to go walk a marathon that day.

What did you find more difficult: the fundraising or the walk itself?

It was interesting. I thought that the fundraising would be more difficult than it was. Once I started messaging people through Facebook, Linkedin and e-mails, the donations began to come in like a domino effect. So many people have been affected by breast cancer, so once someone hears you’re doing the walk, people begin to contact you to donate.

So, the walk itself turned out to be the more difficult aspect. I mean, you just can’t train to walk a marathon and a half. You don’t have the time for it. To keep yourself engaged and motivated for hours on end is really tough. Luckily, we had people cheering on us along the whole route, which really helped.

[Let it be known that Yasmin is very athletic. She and I ran a half-marathon together, and she ran it about – oh – a good 45 minutes faster than me. When she says that something is a challenge – it is.] 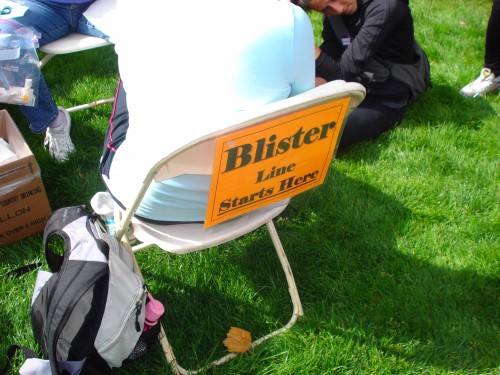 Did you get a lot of blisters?

I only got one!

You must have really trained.

No! I really didn’t train.

I think the worst moment for me physically was when I got the blister popped [there are booths at certain mile-markers that do this for you.] I had to sit down to have it done and my legs got used to sitting. After I got up, my body was like, whaaat? Why are we walking again?

What were the best morale boosters? Any clever shirts?

Santa Barbara on its own was a bit of a morale booster. Because it’s such a tourist spot, many of the walkers were from all over the place. It was uplifting to think about where all these people were going home to and where they were bringing this positive message to. Not to mention, Santa Barbara also had the beaches and State Street.

[For the record, Santa Barbara sounds amazing to me. For the San Francisco walk, we had to deal with hills, the Golden Gate Bridge (I have a terrible, irrational fear of heights) and morning rain showers.]

As for supporters, we had guys wearing cheerleading costumes at different mile-markers. There were also men on bikes who had painted their beards pink and who helped with traffic at major intersections. And, yes, there were two shirts in particular that I remember. Two girls who wore matching shirts that said “Breast Friends.” And then there was this big, burly man who had a shirt that said, “For Two Days I Chase Women! In Loving Memory of my Wife.” He also had pink breast cancer ribbons tattooed on his calves. Seeing him was really emotional. You just wanted to stop walking and give him a big hug. But, it was also very inspiring to see this guy who had turned his personal experience into activism.

Would you do it again?

As you can see, the people who come out to the sidelines are very important to the success of the day. So, if you are in Charlotte this weekend, come support your walkers! And if you’re a walker, treat yourself after the walk to some wine (my suggestion) or a dip in a jacuzzi (Yasmin’s suggestion.) Equally important, if you’d like to sign up for any of the 2012 walks in Houston, DC, Boston, Chicago, the Rocky Mountains, San Francisco, Santa Barbara or New York, please visit the Avon Walk for Breast Cancer website. It’s an event you will never forget.

Have you participated in an Avon Walk? Do you have any tips for future walkes? Tell us about it. Let us know what you think! Follow us on Twitter and like us on Facebook to give us a shout. You can also stay on top of exciting events from around the world by downloading the eventseeker app for iPhone, Android or Windows.