By CHRISTINA MELOCIK
I’ve always loved good coming-of age-stories, origin stories, and memoirs. Bill Cain’s latest play, How to Write a New Book for the Bible (directed by Kent Nicholson at the Berkeley Repertory Theatre), indeed satisfies my thirst for this kind of psycho-analytical character-driven drama. However, while I walked into this play understanding that it was autobiographical and written following the death of Cain’s mother, Mary, what I didn’t expect was how hard and often I could laugh while watching a play written in such somber circumstances, and how much I could actually enjoy a bit of “preachiness” in a play. 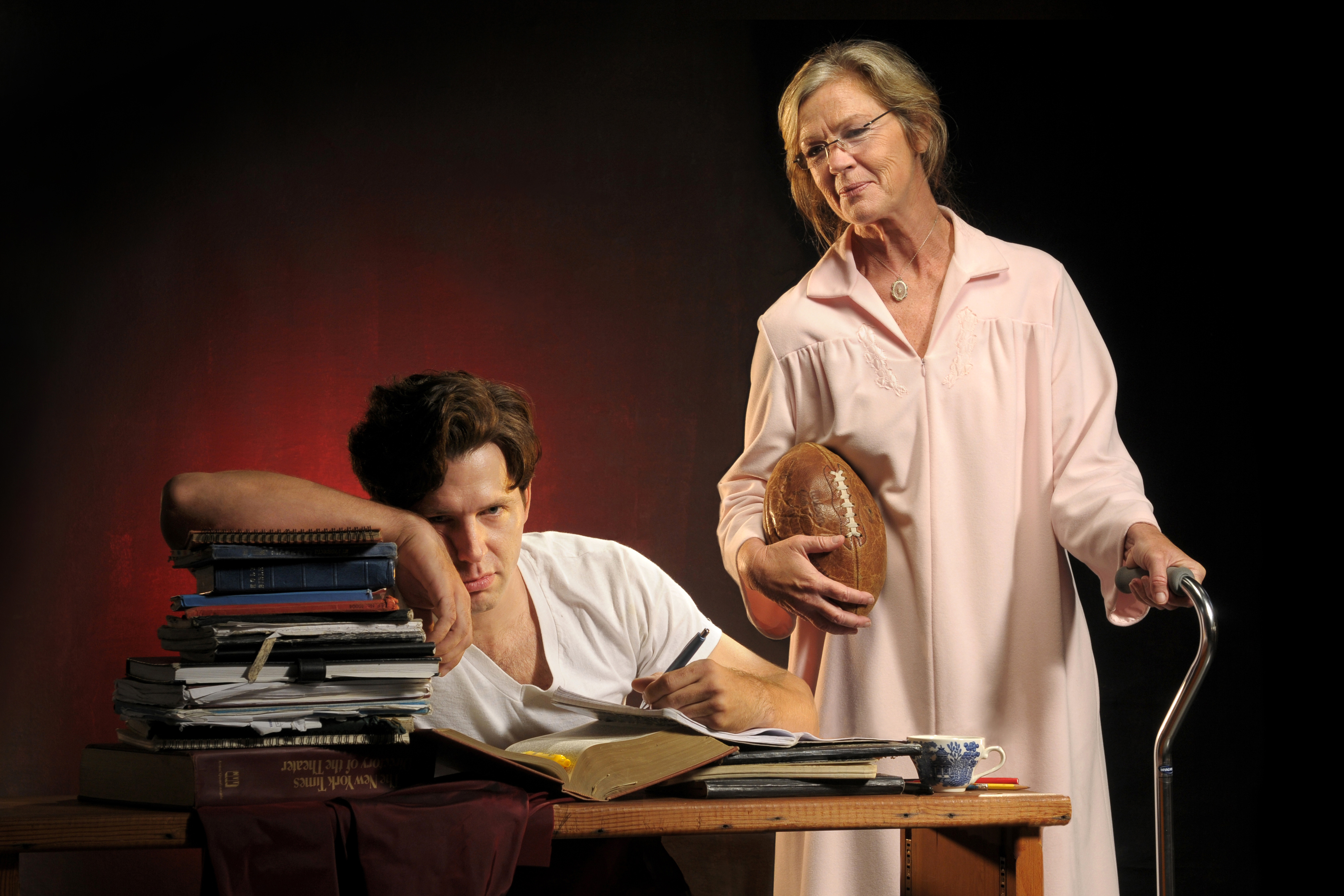 It may be unfair to describe How to Write as preachy. Cain is actually a Jesuit Priest/award-winning-playwright, so it is entirely appropriate that at key moments, Bill, (played charmingly by Tyler Pierce) speaks directly to the audience, combining funny and entirely relatable observations with reverent revelation. Pierce plays Bill Cain as if he were the impossible offspring of Ray Romano and Henry David Thoreau. And although these monologues are certainly informed by Cain’s clerical past (the character half-waxes-half-admits that “all writing is prayer”), they seem to trod the inviting meanderings of a philosopher-poet, eschewing the guilt-laden homilies which former-Catholics fervently avoid.

Despite the fact that Pierce narrates throughout the entire experience, one of the play’s many effective but enigmatic quirks is the fact that we don’t really get to know Bill terribly well. For all the autobiographical opportunity, Bill doesn’t talk much about himself; indeed, he goes out of his way (most noticeably in the second act) to emphasize transparency and fact rather than his role in the story, swearing particularly to keep as close as possible to the words written in the journal he kept at the time of his mother’s passing. Yes, you learn about Bill through periodic admissions about himself, nearly all of which carry a certain amount of embarrassed “full-disclosure”-style Catholic guilt. But more often than not, Bill takes a back seat to the grand and familiar stories and quirky personalities of the other Cains, and he is shaped by living in the space between these interactions. As in the tradition of holy men everywhere, Bill sets himself as a man apart from men–even in his own story–and, through observing and reporting as truthful a retelling as he can manage, he brings us along on his journey to the heart of sorrow that can’t help but be as personal to every member of the audience as it is to Bill himself. 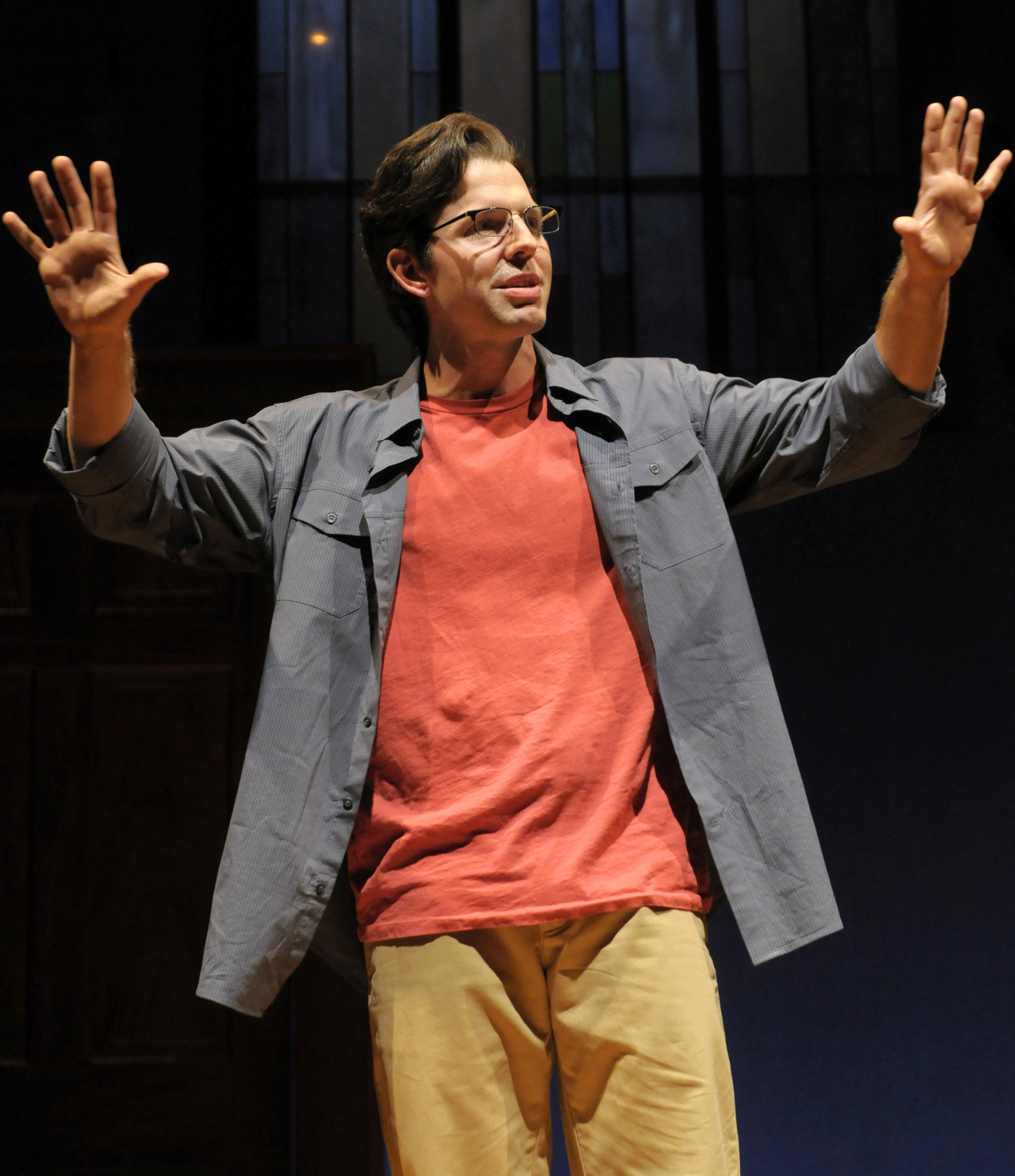 Surprisingly, Bill isn’t the only character that narrates this memoir. The other characters live like puppets on the stage of Bill’s mind. They appear and disappear at his command, follow his direction, and like any good ventriloquist show, humorously take a life of their own, out of the control of their master. Bill’s effervescent father, Peter, played by Leo Marks, retains his youthful image as an ode to the way that Bill best remembers him–as a healthy middle-aged man. (This is also a convenient solution to what could otherwise be a distracting age difference between the actors playing Bill’s parents.) Pete speaks directly to Mary after his death, just as Mary (played marvelously by Linda Gehringe) speaks directly to Bill and the audience, nagging, and then poignantly pleading with Bill to not make her look foolish in this play. Narrator Bill jumps in and out of memories like a spirit from Dickens’ A Christmas Carol, allowing the memories to prove a point, or express a sentiment. It is, perhaps, more thematic to say that the scenes these characters inhabit serve to illustrate Cain’s beliefs and values, not unlike letters of the Apostles, but starring a new cast of New Testament characters–a Peter, Paul, Mary, and, um, William (The actual names of Cain’s family, and an example of the more casual, easy-going way that Cains’ parents typically went about raising their second child). It is clear, from the words of Bill, that this play is an evocation of meticulously catalogued but ultimately imperfect memories. 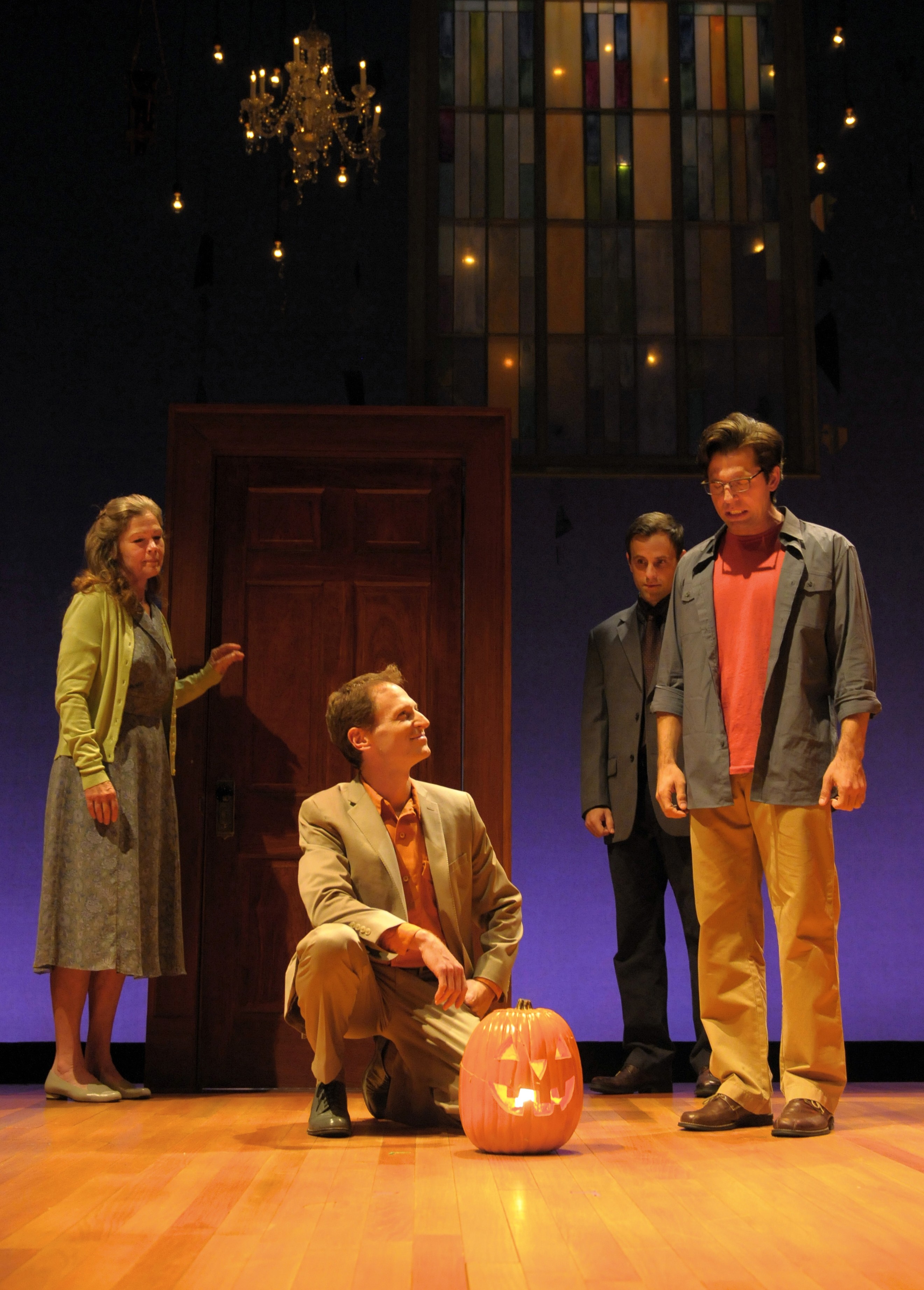 Bill has done his best, he swears time and time again, to conjure from his mind as real a retelling of the events as he can, with even the set (designed by Scott Bradley) representing a powerful mirror of this promise. The stage as a whole has a purposeful Cathedral-like quality to it, with high open ceilings and more space than stuff. Within this cathedral, every one of the play’s sparse props and set pieces dangles visibly in the air, lowering themselves into place as they’re needed. The result is extremely effective: the audience becomes not mere observers of Bill’s story, but observers of his memories of the events, where all the people and pieces exist together, just out of reach, coalescing into form when memory demands. The marks of a memories’ editorial hand appear throughout: the same scene will sometimes play and then replay itself, reminding itself that the comedic or dramatic portrayal is not necessarily the accurate reality of what happened. As in all things in this production, the memories themselves strive to “get it right,” even if it means a second take.

How to Write a New Book for the Bible is, simply put, worth seeing. Though the deaths portrayed are sorrowful and inevitable, you will find yourself celebrating the Cain family’s life together rather than mourning the passing of its elders. Marks plays an enchantingly dream-like father figure. Gehringer is hilarious and heartbreaking as the perfectly flawed and salty Mary. And Aaron Blakely, who plays Bill’s brother, Paul, deftly portrays the tense and nuanced relationship that siblings share. The entire cast portrays the Cain family with such captivating, tangible chemistry and love, that while watching this play, don’t be surprised if you find yourself also shedding tears of joy, beauty, and laughter.

How To Write a New Book for the Bible plays at the Berkeley Repertory Theatre now until November 20th, 2011.

Let us know your thoughts on How to Write a New Book for the Bible. Let us know what you think! Follow us on Twitter and like us on Facebook to give us a shout. You can also stay on top of exciting events from around the world by downloading the eventseeker app for iPhone, Android or Windows.