The third installment of my Halloween series is devoted to ghost tours in the United States. There are plenty of great tours in many American cities, so eventseekr is bringing you the 6-6-6 on paranormal tours throughout the country.

Prices quoted are for adult tickets in 2011. Many of these tours operate year-round and have additional tours offered in the month of October, so it’s not too late to check them out! Some tours are cash only, so look at their websites for payment information.

The Original Ghosts of Gettysburg offers five different walking/minibus tours that cover much of the city, including Steinwehr Avenue and Baltimore Street. With over 46,000 casualties on the fields of Gettysburg, every inch of this town has been touched by the tragic events of July 1-3, 1863, from the Gettysburg College’s elevator, which is a time portal to a Civil War-era operating room, to the home of civilian casualty Jennie Wade.

Baltimore, the city that brought you Edgar Allan Poe, is a great place to take a ghost tour. The Original Fell’s Point GhostWalk in the historic waterfront district recounts tales of rowdy sailors, bawdy prostitutes and travel-weary immigrants who docked in Baltimore in the 18th and 19th Centuries. If you are interested in a more, well, cultural side of Baltimore, the Mount Vernon GhostWalk goes into more than the stunning architecture of the area where tours meet up at the very haunted The Owl Bar. Of course, if you want to grab a pint and hear a tale, Fell’s Point Haunted PubWalk might be more up your alley. 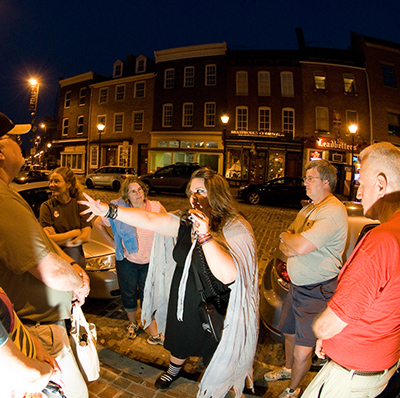 3. Salem Night Tour – Salem, MA – $11.29There’s no doubt about it–Salem, Massachusetts is one spooky place. Visitors from around the world flock to this small town outside Boston to explore the site where 19 people were executed for crimes of witchcraft in 1692. For 90 minutes, paranormal seekers on the Salem Night Tour get to roam around the streets of Salem with costumed tour guides who educate everyone on ghosts of the Joshua Ward House, Hawthorne’s House of the Seven Gables, Hawthorne Hotel, Lyceum Restaurant and The Witch House.

D.C. has always had ghost stories associated with its swampy past, including tales of a phantom War of 1812 British soldier with a torch, sightings of Abigail Adams hanging laundry in the East Room of the White House, and legends of Abraham Lincoln’s 6’4″ nighttime presence shocking Queen Wilhelmina of the Netherlands and Prime Minister Winston Churchill–and those are just the stories from the White House. Washington, D.C. Ghost Tours meets up in front of the Cutts-Madison House, where former First Lady Dolley Madison lived until her death in 1849. Dolley’s spirit is reportedly seen seated in a rocking chair where a porch once stood.

Based on the Chicago Haunts books by Ursula Bielski, the Chicago Hauntings Tour informs the curious all about the demon child of Hull House, spirits of Chinatown and the ghosts of the victims of the Valentine’s Day Massacre. One of the most popular stories told on the tour is the classic urban legend of Resurrection Mary, the phantom hitchhiker, whose spirit originates from either Resurrection Cemetery or the Willowbrook Ballroom on Archer Avenue. There are several special tours held throughout the year (such as the Haunted Archer Avenue Tour or the 7-Hour Ghost Hunt), so it’s definitely worthwhile to put aside some time to take one of these tours when in the Windy City.

With two spooky tours, Ghost Tours of Newport offers an Olde Town Ghost Walk that focuses on the historic downtown district. One of the must-see spots on the tour is a place appropriately called Blood Alley where visitors report hearing the sound of a drum of a phantom child sent to find treasure. Another tour is called Carved in Stone, which is entirely devoted to Newport’s Common Burying Ground, the oldest cemetery in Rhode Island, and is held on Saturdays in October.

Top 6 Ghost Tours in the South

New Orleans’ own French Quarter Phantoms offers ghost hunting enthusiasts and history buffs four different tours of some of the city’s most well-known and lesser-known sights. One of the most popular tours offered is the Ghost & Vampire Tour where guests can peek outside the famous LaLaurie Mansion. The LaLaurie residence will forever be remembered as New Orleans’ astonishing house of horror, where slaves were sadistically tortured and chained to the walls of the home until a fatal 1834 fire resulted in many of their deaths as well as the entire neighborhood finding out what had been occurring behind closed doors.

From June through the beginning of November, visitors to Richmond will certainly be surprised to hear about some of the River City’s spirits in Shockoe Bottom thanks to Eerie Nights Ghost Tours. Richmond has seen its share of tragic events, such as the Richmond Theatre fire or the collapse of the Church Hill Tunnel. Of course, there are those ghosts of the Civil War soldiers lurking around the dark corners in one of the oldest parts of the city. 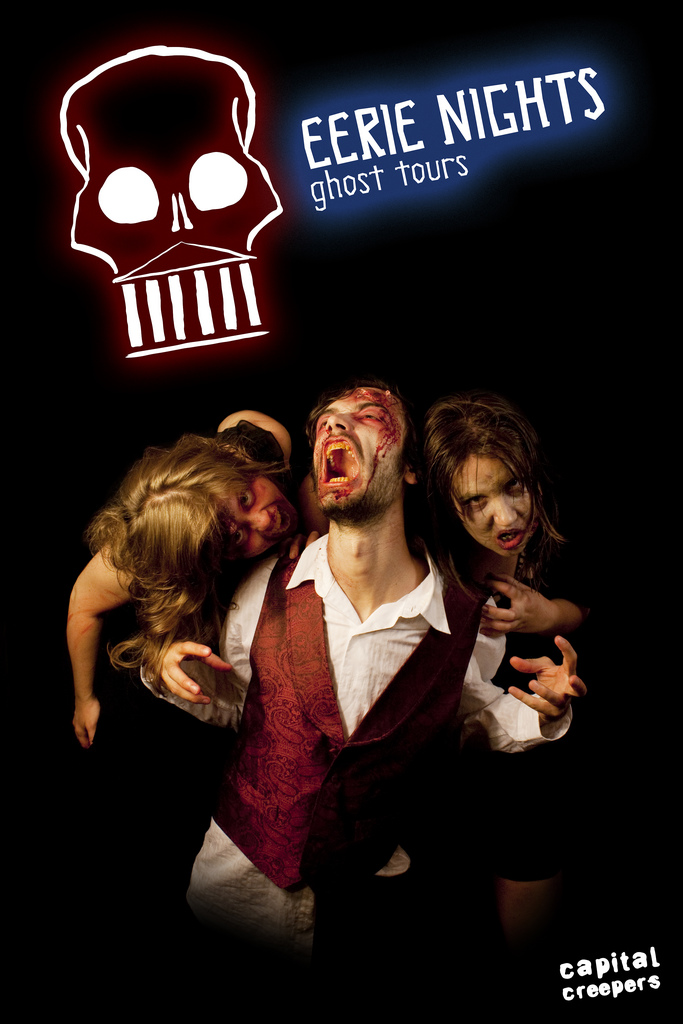 The visitors who walk around Old Town Key West searching for remnants of the city’s morbid past know that Key West is haunted by much more than just Ernest Hemingway look-a-likes. Key West’s Original Ghost Tour offers the complete array of ghost stories about its past, including stories of Robert the Doll and Captain Tony’s Saloon. By far the most disturbing and macabre story centers around the Dean-Lopez Funeral Home where the ghost of tuberculosis victim Maria Elena Milagro de Hoyos roams. A patient of “Count” von Cosel, de Hoyos was the object of his affection, and he was unable to let her go when she died. Doing what any lovestruck gent would do, he dug up her body two years after she died, encased what remained in wax and plaster, and kept her in his home for seven years. The much photographed body was put on display in the Funeral Home and viewed by all of Key West.

Before Hurricane Katrina slammed the Gulf of Mexico, there was Hurricane Galveston in 1900 when 6,000 to 12,000 people perished in the deadliest natural disaster in United States history. Dash Beardsley has been organizing ghost tours of Galveston since 1998 and now his company, Ghost Tours of Galveston, offers up six different haunted tours to get you in the spirit of things for Halloween. The most popular offering is the Original Ghost Tour of the Strand, which delves into the city’s turbulent history in an entertaining and educational way.

Without a doubt, Savannah is one of the most haunted cities in the United States as we learned from The 6-6-6 on Haunted Locations in the U.S. posting a couple of weeks ago. Cobblestone Tours specializes in a 90-minute, candlelit Haunted History Tour through the streets of the historic downtown. Visitors can learn all about Savannah’s plagued past of Yellow Fever epidemics, war, Little Gracie and the former Pulaski Hotel. If you don’t want to take the kids along, the Haunted Pub Crawl might be more your style with daily departures from either the Moon River Brewing Company or Molly MacPherson’s Scottish Pub.

Charleston’s Bulldog Tours jumps feet first into another of the South’s great haunted cities with a full array of tours regarding this city’s past. Charleston was given the nickname “The Holy City” due to the high concentration of houses of worship in its historic center, but visitors today will find that many of these colonial-era structures are haunted by the spirits of those who once resided in this port city. Many of Charleston’s most recognized landmarks and stories are explored on their many tours, including the Provost Dungeon, The Old City Jail, alleyways of duels and haunted burial grounds. 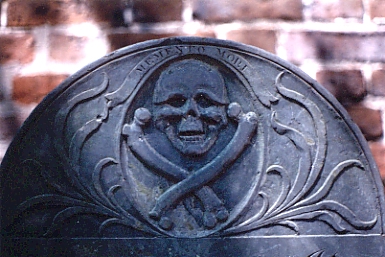 The two-and-a-half-hour Haunted Vegas Tour of Las Vegas’ tragic past is one of the best attractions in Sin City. Take a bus tour on and off the Strip past some of the city’s most haunted sights, such as Bally’s (formerly the MGM Grand, where 85 people perished in one of the country’s most tragic hotel fires), the Flamingo Gardens (haunted by mobster Bugsy Siegel) and the intersection between Flamingo Road and Koval Lane where rapper Tupac Shakur was shot. The final stop of the bus tour is to Fox Ridge Park in nearby Henderson where there are said to be ghosts of pioneers and children.

Led by certified members of the International Ghost Hunters Society, the Beyond Bizarre Ghost Tour is an actual paranormal investigation, using real ghost hunting equipment such as electromagnetic field meters. Fans of paranormal ghost hunting shows will find this tour particularly enlightening as the knowledgeable and experienced tour guides explain the different types of hauntings, possible scientific explanations for haunting reports and tips on understanding paranormal activity. Tour highlights include a ghost hunt under Old Town Pizza, one of the city’s most haunted locations. 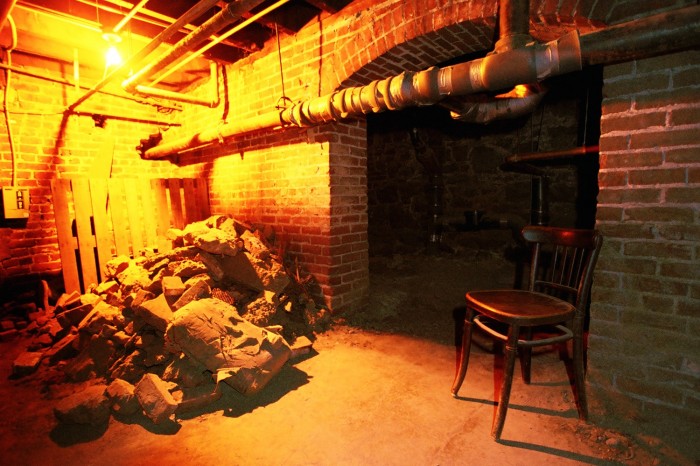 The Market Ghost Tour of Seattle explores the famous Pike Place Market area, uncovering its macabre history and delving into local legends. This 75-minute walking tour takes visitors to the city’s first mortuary, a brothel and a cemetery. Both history buffs and aficionados of the supernatural will be drawn in by the colorful storytelling of the always-engaging tour guides. The company offers both a family-friendly tour (at an earlier time) and an over 18 tour. The Lust Tour incorporates many of the tales from the regular tour, with an emphasis on the seedier side of Seattle’s history.

The San Francisco Ghost Hunt Walking Tour enlightens participants on some of the city’s more famous specters in the Pacific Heights area. Beginning at the beautiful and historic (and haunted) Queen Anne Hotel, hear tales of Flora, who purportedly haunts California Street, and Mary Ellen Pleasant, the Voodoo Queen of San Francisco. After the walk through the neighborhood, visitors are free to wander through the Queen Anne for some solo ghost hunting. The tour runs for over two hours, with one hill on the walk. Keeping in mind the mercurial San Francisco weather, dressing in layers is a good idea. Advance bookings are neither required nor offered, just show up in the lobby of the hotel before the tour starts.

You might think of Aspen has just a ski resort town, but there really is a lot of terrifying history in this location. The Aspen DarkSide Tour is just the nighttime activity you need if you plan to stroll through the historic part of town. The Red Onion in the center of town is one of the favorite stops on the tour, where visitors learn about a grizzly murder. Another of the main stops on this tour is the Hotel Jerome, where the mischievous ghost of a little boy makes his presence known by the pool. 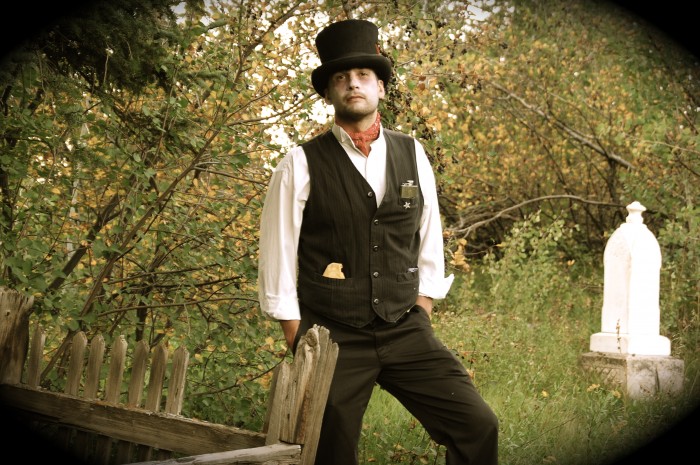 While in New Mexico, try stopping by for a spooky tour with the Ghost Walkers of Santa Fe. One of the oldest cities in the United States is also one of the most haunted. This tour includes a stop and tale about the very haunted La Posada Resort, which is home to the spirit of Mrs. Julia Staab, a former resident on the property. Although Mrs. Staab passed away in 1896, her presence was not seen or heard on the property until the 1970s. Nowadays, she likes to make it known that La Posada was once her home!

Do you seek out ghost tours whenever you travel? Photo courtesy of Baltimore Ghost Tours.Let us know what you think! Follow us on Twitter and like us on Facebook to give us a shout. You can also stay on top of exciting events from around the world by downloading the eventseeker app for iPhone, Android or Windows.