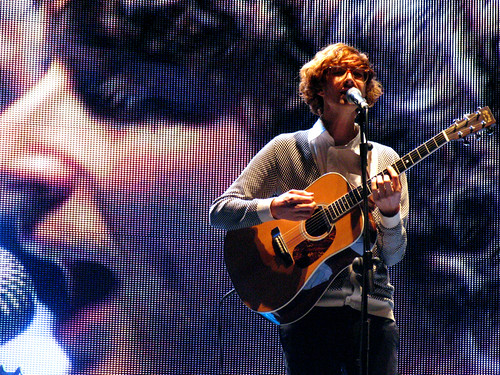 It’s not because they aren’t radio-friendly. They’ve often been compared to Simon and Garfunkel (whose wistful songs dog daytime airwaves). Kings of Convenience’s songs–lilting, atmospheric and heart-rending–were made for fraught car journeys and newspaper mornings in coffee shops. From their first LP, Quiet is the New Loud, their music has made a strong stand against the increasing cacophony of modern music. As Erlend Øye himself sings on the ephemeral “Misread,” they are “the ones who made a difference, by withstanding indifference.” Watch the video. It’s three minutes of undiluted summer.

Their last studio album, Declaration of Dependence, was a critical triumph and for fans, worth the five-year wait. The promotional tour was met with hushed reverence, even in New York’s Bowery Ballroom. The songs were more of the same–quiet acoustic loveliness with sharp lyrics about love that touch a modern nerve: “We’ve got four eyes, so why yearn for one perspective?”

Of course, lest you think that Kings of Convenience is a dull band that takes itself too seriously, Øye and Bøe’s live performances are interspersed with the duo’s dry wit and Øye’s gangly white-boy dancing, which has to be seen to be believed.

Kings of Convenience tour so rarely that their upcoming show at The Fillmore has the makings of something very special–come join the hardcore fans and settle in for a night of melancholy Norwegian charm.

Are you a fan of Kings of Convenience? Find out when Kings of Convenience will be in your town by tracking them on eventseekr. Follow us on Twitter and like us on Facebook to give us a shout. You can also stay on top of exciting events from around the world by downloading the eventseeker app for iPhone, Android or Windows.