Anyone who is a fan of dance music definitely knows who Justice is. Even those with only just a passing interest in dance music will still likely know who Justice is. I definitely fall into the former, and hold Justice’s Cross album in especially high esteem. So when it was announced earlier this year that the duo’s sophomore album would finally be released this fall, I was filled with dread as much as I was filled with excitement. Then in late October, after five long years following the release of the acclaimed Cross, it finally happened: Justice released its follow-up, Audio, Video, Disco. 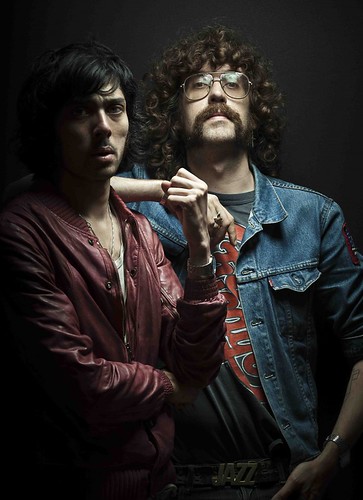 Cross consisted of tracks like “D.A.N.C.E.”, which had major crossover appeal. The album was also full of hard rhythms, with lots of bass distorted at almost every turn on tracks like “Phantom,” “Stress” and “Waters of Nazareth.” As Justice started to drift into the EDM background after extensive touring in support of the album, the popularity of the electronic-French-House genre that Justice helped to reinvigorate was at a high point with dance music fans. The hard beats and basslines that Justice helped to usher into electronic music’s current state has already begun to give way to even harder beats and basslines by their contemporaries. The popularity of U.K.-bass and dub-step in Europe has now taken over North America, morphing itself into a genre that is largely popular for its hard and grinding beats that wobble and boom. The influence of dance music is even reaching Top 40 radio stations here in the States. The landscape of dance music has definitely changed in five years, and after listening to Audio, Video, Disco, it is apparent that Justice did not want to make another album exactly like Cross.

As a whole, Audio, Video, Disco will cause some moving and grooving on dancefloors, but nothing on the album really pops. Not just in terms of having a real club banger, but in the fact that nothing immediately stands out. The album opener, “Horsepower,” is a decent way to catapult the listener into the album, which immediately leads into “Civilization,” which is probably the only track that comes close to matching the fire-power of some of the massive, hard, club bangers off Cross.

The beginning guitar riffs on “Canon” remind me of Gorillaz’s “Stylo,” maybe a little too much. Far be it from me to hold that against Justice, but those snazzy riffs on “Canon” are just a little less snazzy because of it. A minor nit-pick aside, I do like the song better than most of the other songs on the album. “Helix” and “Audio, Video, Disco” are also decent gems.

Justice ramped up the instrumentation on Audio, Video, Disco, thus it feels more layered and refined. As Consequence of Sound points out, this effort is a melding of dance music and arena rock. It is a very apt description. The French House sound that Justice’s label, Ed Banger Records, is synonymous with is inspired by the disco and funk eras from the late 1970s through the mid ’80s, and even to the early ’90s. So Justice’s progression in this particular direction isn’t wholly surprising either. It should be interesting to see how Justice’s performances take shape once proper touring begins, and we all get a chance to see how these new songs are mixed in a live setting.

Audio, Video, Disco is Justice’s attempt to develop another side of itself, not too unlike a power-fastball pitcher in baseball trying to develop off-speed pitches like a curve-ball and change-up to balance his repertoire. Like a pitcher, Justice has definitely made a conscious effort to take something off its fastball–with mixed results. I’m still not sure what to feel about this album. After all, I had been impatiently anticipating this album for such a long time that the only expectation I had was that I would have none. All that I really knew was that I didn’t want another album exactly like Cross. I wanted Justice to do something different, and for better or worse, that’s what I got. Audio, Video Disco may have its shortcomings, but my very, very unhealthy bias for Justice, Ed Banger and all things French-House compels me to forgive most of these shortcomings.

Are you a Justice fan, too? Find out when Justice will be in your town by tracking them on eventseekr.com. Follow us on Twitter and like us on Facebook to give us a shout. You can also stay on top of exciting events from around the world by downloading the eventseeker app for iPhone, Android or Windows.