In hindsight, some warning signs had definitely sprung up prior to Das Racist’s Bay Area performance last Friday night that may have hinted at the bizarre and entirely lackluster show that was to come. 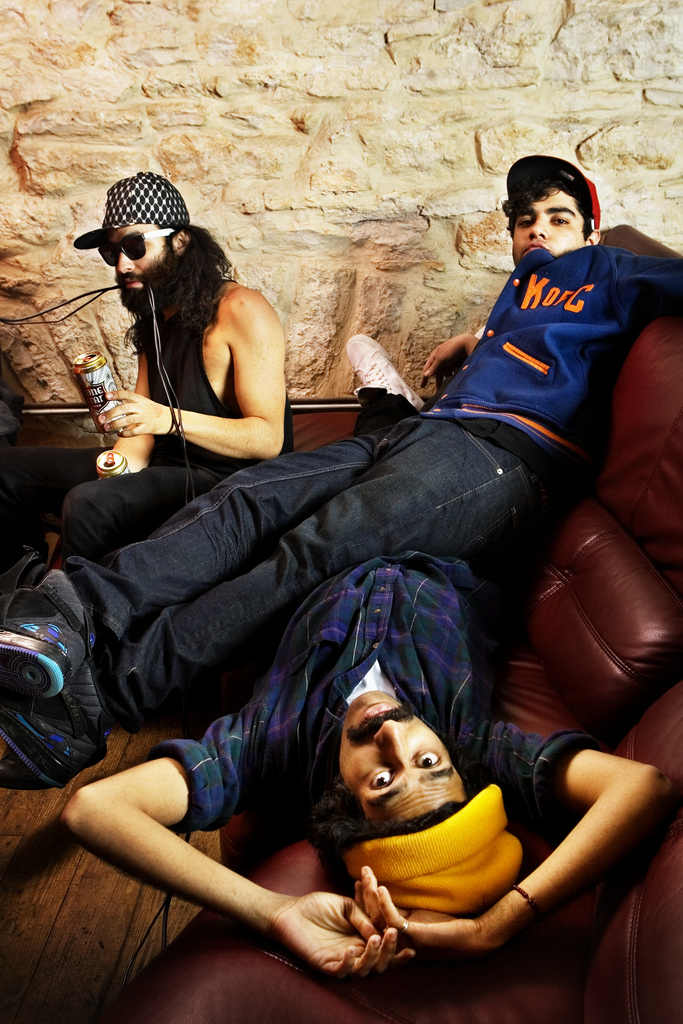 Originally slotted to take place in Berkeley, the show changed dates, times and venues on more than one occasion before finally being confirmed at San Francisco’s Ruby Skye. Predominantly a nightclub, the venue dictated an early 8 PM start time that meant signs posted all over the place ensuring everyone understood they’d promptly be kicked out at 10 PM sharp to make way for the evening’s dance crowd. Ruby Skye seemed completely ill-equipped and uninterested in the show from the get-go—further evidenced by the muddy sound and frequently malfunctioning microphones—so I can understand the frustration performers must have when they’re unreasonably made to feel like they’re a burden on a venue. But that’s about where my sympathy for Das Racist ends in this particular instance.

From the minute the Brooklyn-based hip-hop group took the stage, the word “lazy” frequently came to mind. The trio, which consists of hype man Dap and rappers Heems and Kool A.D, is known for its hyper-referential pop culture rhymes and meta self-awareness, so a certain amount of ironic posturing was to be expected. But by the time Kool A.D. had sat down onstage and taken his cell phone out mid-song for the second or third time, it was clear everything had gone from curiosity to train wreck in a hurry.

The group opened with “Who’s That? Brooown,” a track from one of its 2010 mixtapes, before moving on to material from Relax, the debut LP it’s currently touring in support of. Within the first five minutes of the show, a group near the right side of the stage threw a cup of water at Dap, sparking a brief but heated exchange between the two parties. After angrily throwing a cup back out into the crowd, it seemed as though Dap wanted to take things a step further before being held back by Kool A.D., causing cooler heads to ultimately prevail.

On record, Das Racist expertly toes the line between cleverness, humor and genuine skill—favorable attributes that were nowhere to be found on Friday night. For thirty or forty minutes, the trio fumbled through a low energy set full of annoying disinterest and what seemed to be bratty pouting. Heems, a talented and entirely capable rapper by most accounts, stumbled around the stage with his sweatshirt half on and half off, eyes closed, as if he was barely able to muster up the interest to be there, let alone be bothered to give a decent performance.

Halfway through the show, a string of surprise guests took to the stage, thankfully distracting from the disappointment that was in full swing. Boots Riley of Oakland’s The Coup received a rousing round of applause from surprised audience members, proceeding to steal the show with an energetic verse that reminded everyone what a professional rapper sounds like. Lakutis, the trio’s touring DJ, also tried his best to salvage the show when he stepped away from his laptop and took to the mic for a lively track he’d written himself.

For whatever reason, Das Racist hit some sort of stride toward the tail end of the show, setting up closers “Michael Jackson” and “Rainbow in the Dark” with “we’ve got time for one more…we’re gonna try to squeeze in two”—which of course prompted Ruby Skye to tackily turn the house lights on mid-song. It was too little, too late though, as confused fans could be heard expressing their disappointment while being hurriedly herded out onto the street.

Das Racist is a refreshingly unique and talented hip-hop group, and whether this was just an off night, a phoned-in performance meant to send a message to the venue or some sort of lame performance art piece ultimately couldn’t matter less. If the group doesn’t weed shows like this out of its repertoire and start treating its fans with some more respect, it’ll disappear into obscurity just as quickly as it appeared.