By ADAM SAWYER
It was Saturday night after a bout of rain when a couple of friends and I strolled up to Rickshaw Stop. I was ready for my dose of feel-good rock in the form of Australian quintet, Little Red. 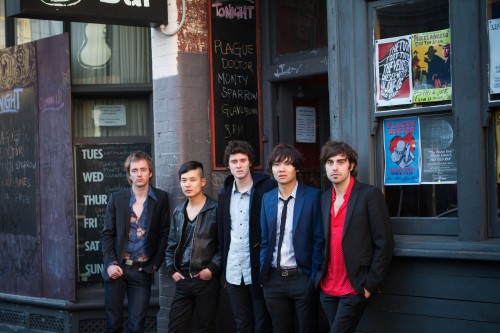 Little Red. Photo courtesy of Tell All Your Friends PR.

The group is currently touring their latest album, Midnight Remember. Unfortunately, the ‘Stop’s doors weren’t open yet. I guess we got a little overzealous. We did what any respectable concert attendee would in said case and had a drink down the street. The city streets had a chill that made the inside of the venue feel like a paradise once we got there. As far as concert spots go, the Eden parallel is not too far from the truth. One can rock out by the stage with the bartender only a hop away. There are also two upstairs balcony areas furnished with benches and couches. Yes, couches. Needless to say, we spent a big part of the evening lounging in the warmth, enjoying the atmosphere and sipping our specialty drinks of the evening: Little Red Toddies (add a bit of grenadine) and Big Dickels. The namesake of the toddy was obvious, while I was left wondering if the latter was dubbed so in honor of the first performer, Bleeding Knees Club.

If I were to encapsulate the Australian duo’s performance in one word, I would say that it was “cute.” At one point, after a song including the lyrics “She held my f***ing hand,” Jordan Malane (guitar and vocals) quipped: “That song was for my grandma… Not really.” I wasn’t let down, nor was I blown away by their semi-thrashy yet adorable boy rock. After a video projection interlude, electronic artist and mixer Yalls took to the stage. This was the underwhelming point of the night for me, but I was excited for what was to come next: Oona. 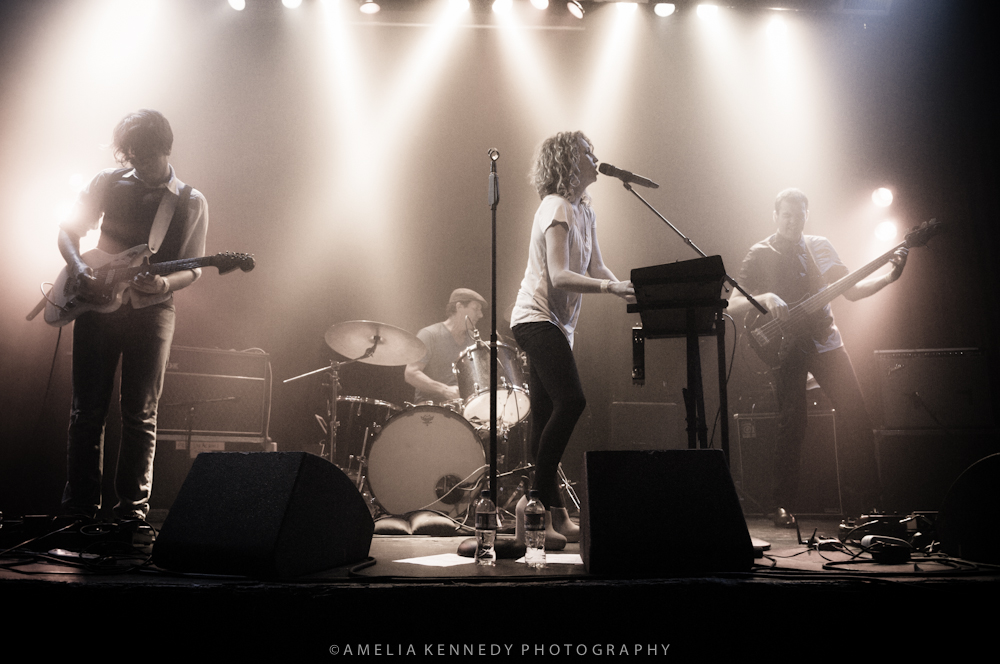 The singer/keyboardist and her band felt like a magical concoction of Florence and the Machine mixed with PJ Harvey, or maybe a touch of Shingai Shoniwa from the Noisettes. This group rocks you, funks you for days and leaves you smiling. The show got bumping with “I Wanna Know U,” a great rock number bloated with guitar juice and versatile vocal stylings that just wouldn’t quit from front woman Oona Garthwaite. Bottom line: she stole the show. Listen to her.

I Wanna Know U – Official Music Video from OONA on Vimeo.

I got my butt off that couch and down to the dance floor for the main course of the evening. The five-man rock troupe lined the stage, one beside the other, each with his own instrument and microphone. Little Red’s first song was noticeably shaky but the chords fell into place when Dominic’s voice warmed up with the second number, “Slow Motion.” The song created a musical trance, utilizing repetition and a catchy melody. Then the audience was showered with some older, more rocky tunes from the group’s repertoire before being pulled right back into a trance with “In My Bed”–a quaint song about not being able to shake the thoughts of a new love, led vocally by bassist Quang Dinh. His charmingly nasal, simple style was a great match for the feel of the song. His voice was accompanied by all the men in big, open chords, showcasing the group’s strengths. The keyboardist, Tom Hartney, took up the harmonica for this one, effectively adding a folksy slant. “All Mine,” the epic, introspective masterpiece got its time in the spotlight next. It started quiet and moved on with a steady calm, like a metronome, building into a larger-than-itself musical confession. It was a beautiful moment. Tom snags center stage for “Place Called Love,” singing his heart out between the love taps on his tambourine. ‘Red saved its big number, “Rock It,” for the near end of the set. It did what it set out to do: no socks were left unrocked.

The Australian rock group is talented, while their music is fun and catchy. At this point, I see them as a fantastic opening act–one you wouldn’t mind enjoying while waiting for your new favorite group. There was a palpable lack in chemistry among band members, combined with little to no interaction with the audience. This could have had something to do with the low turnout which can definitely affect the energy. Conclusion: it was a great show. There just needed to be a bit more glue holding it together. If they work on that stage presence and keep up the fantastic work, I don’t see anything but a bright future for Little Red.