This weekend at Davies Symphony Hall, Michael Tilson Thomas will be leading the San Francisco Symphony in performances of works by 19th-century German composer, Franz Schubert.

The program begins with the “Overture” from Schubert’s opera Alfonso und Estrella, written in 1822 when the composer was only 25 years old. Schubert’s operas (he only wrote two) are rarely performed and show the more ambitious side of the composer, whose most renowned works were generally written for soloists or small ensembles.

Alfonso und Estrella is situated in Western music history as a successful first outing for Schubert into the developing tradition of German Romantic opera on a large scale. However, due to the composer’s young age and lack of experience working in dramatic forms, many critics felt that the action tended to lag over the course of the opera. However, Schubert’s mastery of songwriting and melodic lines ensured that the music was consistently fresh and interesting, despite the opera’s structural weaknesses. As is generally the case with operatic overtures, the strongest melodies and arias from the opera are showcased in the “Overture.” The work’s premier was conducted in 1854 by Franz Liszt in Weimar, almost 30 years after the composer’s death.

Following the Symphony’s performance of the “Overture,” a small ensemble will take the stage to perform one of Schubert’s most popular chamber works, the Piano Quintet in A Major “Trout.” The work is referred to as the “Trout Quintet” due to Schubert’s use of the melody from his equally famous song for piano and voice, “Die Forelle,” or “The Trout,” which presents itself in the Quintet’s fourth movement as a theme with variations. The work is very “pretty,” with the piano part spending much time in the higher registers to give the listener the impression of water in motion. It is a very relaxing piece of music, and stands as one of Schubert’s most oft-performed chamber works.

The version performed by the San Francisco Symphony is actually an arrangement of the quartet for orchestra by Gustav Mahler, done in 1896. The quartet is one of Schubert’s most emotionally moving works, and the listener can almost immediately pick up on the composer’s foreboding and preoccupation with death in each measure of the work. The work’s final movement is an Italian dance called a “tarantella,” which is both maddening and tragic as the listener hears the composer rage at full speed against his impending demise. 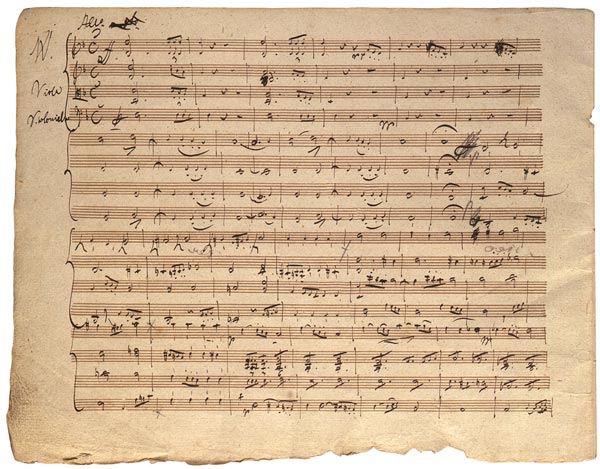 Although the Symphony’s closing piece doesn’t end on a joyous note, one gets the sense that the program attempts to closely follow the creative and emotional trajectory of Franz Schubert’s life. The music being performed this weekend has the ability to give even the average listener an idea of who this mysterious composer was, and like his untimely death at the age of 31, the “Death and the Maiden Quartet” acts as a sobering finale to a program that celebrates the works of one of the Western world’s greatest composers.

(The lieder that inspired the chamber works discussed above.)