Back in October, I wrote a review for indie, dance-rock band Reptar‘s second consecutive show at the Fillmore with Foster the People. After that show, I had the chance to chat with a few of the members outside the venue, and they were kind enough to offer me contact information so that we could set up an interview at a later date. It just so happened that Reptar was coming back to the Fillmore only a few weeks later to play a show with the electronic-indie duo Phantogram, on November 2nd, so I jumped at the chance to get an interview with the up-and-coming band.

Originally, I was scheduled to do a phone interview with Reptar the day of the show, but after a game of phone tag–a succession of failed call attempts on both sides–Reptar keyboardist William Kennedy invited me to come down to the venue for the show. I couldn’t believe my luck!

After meeting up with Kennedy outside of the venue, he rounded up drummer Andrew McFarland, lead singer Graham Ulicny and their behind-the-scenes man/ videographer Ross Brubeck, and we entered the dressing room of the Fillmore for a quick interview. I have to admit: when I first entered the room I had an internal nerd moment and tried to wrap my head around how many rock and roll legends stood in the same spot I was in. That mental relapse aside, my conversation with the guys was like talking to old friends. Like myself, they are all very obvious products of the 1990s.

How is San Francisco treating you so far?

Have you had time to see the city?

Yeah the beach! There was a surf competition. We saw Slater kill it! Slater went AWOL. (laughs) 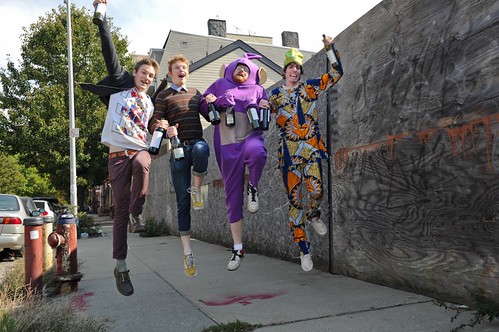 Do you have a song writing process? Or Does it just come together?

Ulicny: I think that since we–for a while, the band was in different places so it was different. Maybe I would write a song and show it to everybody. So now, we actually all moved to Athens in January, Athens, GA. And since then it’s been different. We can work on songs more and write them together, sit in a practice room and play through stuff and talk about stuff. So it’s changed over time.

You guys were all in school recently right?

Are any of you still in school?

Kennedy: We all dropped out in January.

Ulicny: So far… Ask me that question in fifteen years. (laughs)

Kennedy: We’re optimists in this band.

Oh really? They kept calling your fans Reptards. Did you come up with that name?

McFarland: Funny story about Reptards, actually. Our friend who wrote that article, Kristen, actually came up with that. Kristen really likes to, kind of pull a leg on everything. Cause it’s kind of ridiculous. She likes to–

McFarland: I don’t know, the Fillmore is pretty awesome.

Ulicny: It’s hard to say what the favorite venue is. I know that we played a show in Milwaukee that was pretty awesome. It might be my favorite show.

Brubeck: It didn’t really have much to do with the venue–it was just a junkie little bar, but the crowd was incredible, and the crowd was, I guess just by some pleasant chance it happened to be a place where a bunch of big bands went through, so people know there’s going to be awesome show there. This bar is called Cactus Club, and a couple years before us Spoon stopped there on tour. Just huge bands.

Ulicny: The White Stripes played there a bunch in the ’90s.

McFarland: I think the Georgia Theatre in Athens is probably up there. That place is impressive.

Ulicny: The Fillmore is the venue I was most looking forward to playing at because I knew the history of the place.

McFarland: It’s kind of ridiculous. The only shows we’ve played in SF have been sold out shows at the Fillmore. 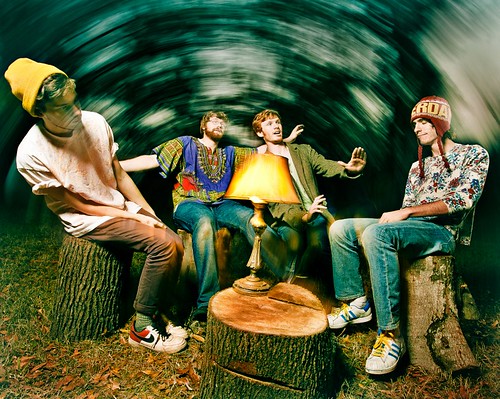 If you could be a cartoon character, who would you be? You can’t say Reptar.

Ulicny: I don’t know who would. (laughs)

Kennedy: So in Angry Beavers, which was one of my favorite shows growing up, there was this one Halloween episode where there was a space slug who came down. It was trying to eat their, umm honey firewood?

Kennedy: Yeah exactly, so its trying to eat that stuff and they got– that’s their favorite kind of wood to eat– and so they were trying to defend it and they got, i think Norb got eaten by the space slug and Dag had to try to get him out. So I would definitely be the space slug from that episode.

Brubeck: I would be Helga from Hey Arnold!

Engleberger: Helga from Hey Arnold! or Shaggy from Scooby Doo.

You guys are all such a product of the ’90s.