On Thursday, November 10th, Tabia C. and I sat down in SF’s Westfield Century Theatres Centre 9 to watch a screening of Hatsune Miku’s live Sapporo concert. In case you haven’t heard of her, Hatsune Miku is a Japanese pop star whose album topped Japanese charts in 2010. She has been selling out concerts in LA and all over Asia ever since. This is what she looks like: 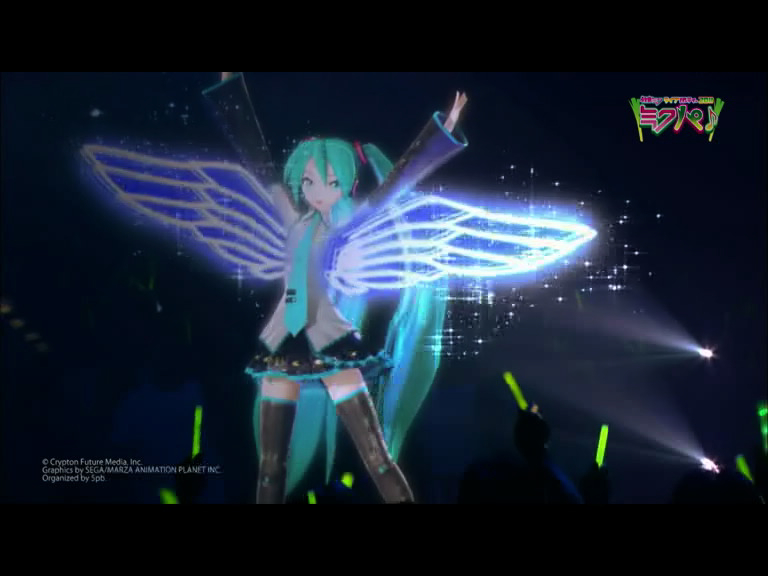 That’s right–Hatsune Miku is a hologram that was developed by Crypton Future Media. She was illustrated by KEI, and her voice is made of a composite of samples from voice actress Fujita Saki. She was the first in a series of vocaloids (singing synthesizers) to implement Yamaha’s Vocaloid2 software, and is part of a stable of vocaloids that are under the KarenT label.

I’ll be honest and say I was pretty surprised when I read that the world had a virtual diva. I thought to myself, “How could something like this get fans? She’s not real.” And then I remembered Hannah Montana and our ranks of auto-tuned singers, and cut Hatsune some slack. Even the idea of a virtual artist giving a performance isn’t that strange, as Gorillaz proved with Feel Good Inc at the 2006 Grammys. However, while Gorillaz created animated characters as a commentary on the manufactured nature of pop music, Crypton just went ahead and developed a whole rank of artificial pop stars. In fact, Hatsune’s concert featured a whole line-up of vocaloids that performed hits to a very energetic (and mostly male) crowd.

So, the question remains–just what type of concert experience would a completely man-made (and quite adorable) pop star give?

As you can tell from the video, everyone is really really into it, and the audience I was in was really enthusiastic as well. People would cheer whenever the intro to a song they recognized played, and the energy was infectious. It was essentially like any other concert. For me, what made the whole experience work was the live backing band. The keyboardist at the Sapporo show was a bit like a ringleader, and he would wave his hands in time with the music and encourage the crowd whenever he had a free moment. Sometimes, he even stood up with some glow sticks and did Hatsune Miku’s dance from his spot behind the keyboard. The lead guitarist also had some virtuoso moments where he seriously rocked out. Seeing that enthusiasm from the band also made me look at Miku in a different light–she’s in some respects a flawless performer. She’ll never be late, sick or hungover, she’ll always be in tune and give you 100%, and she’ll never give you attitude. Provided all the tech goes right, working with her is probably awesome. In addition to all of that, she can also do some pretty magical costume changes. 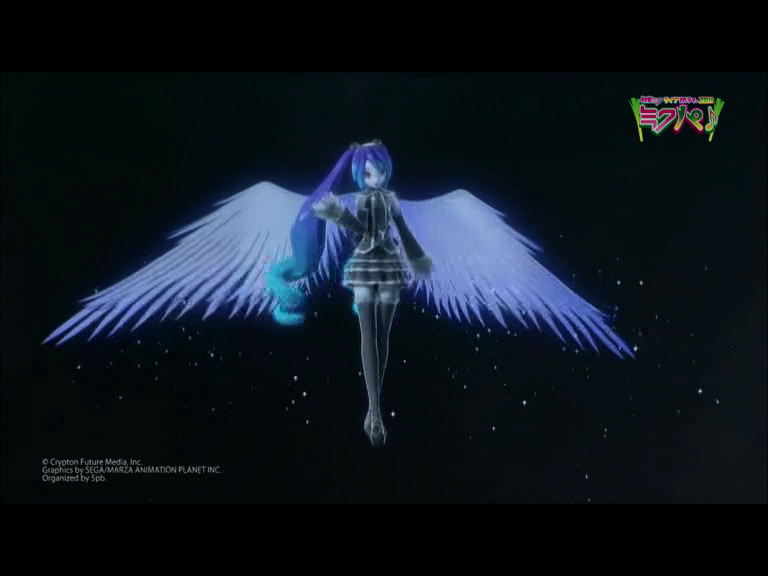 One of Hatsune’s vocaloid siblings, Megurine Luka, showed up for two songs and stole the show. She came out in 2009 and is 20 years old, as opposed to Miku’s 16. What completely floored me was the fact that I thought her voice was real. Some of the other vocaloids sing songs that have superhuman range at superhuman speed. On the other hand, the first song of Luka’s set started in a lower register and sounded, well, human. If you listen to the clip of it below, you’ll see that you can actually hear some vibrato in the timbre of her voice.

Sugary, poppy fun aside, I still need to address the obvious holographic elephant in the room. Although I can appreciate how much technology goes into a completely artificial pop star, I still want something more out of live performance. When singers perform a top hit and come to a sustained high note, you hold your breath for a second and wonder if they’ll hit it or if they’ll do you one better–that suspense adds to the fun of the show. Since everything in this case is lip-synced in the most extreme sense, with the exception of the live band, the show can get a bit monotonous. That, and for some reason Hatsune kept waving goodbye in the last four or five songs, so I kept thinking the show was going to end, but it didn’t. The only real criticism/suggestion that I have to make is that–well–they try to make Hatsune a bit more human (Tabia pointed out that she doesn’t seem to blink, ever), so that the audience can truly forget that she isn’t real. If that’s the case, there’s really no telling how far the vocaloid industry can go.