Unlike the Picasso, Warhol, or Impressionism exhibitions that the de Young has presented in recent years, “Masters of Venice” is not very big–only about 50 pieces. But those pieces are extremely famous. One even wonders how the Kunsthistorisches Museum in Vienna let them travel over the ocean, since most of them will soon be 500 years old. Saint Sebastian by Mantegna, Danae by Titian, Susanna and the Elders by Tintoretto, The Three Philosophers by Giorgione–are you kidding me? All of those works stand at the origins of painting as we know it. The Renaissance, after all, was the period when oil painting technique was first mastered, and art became aligned more with the aristocracy than the church. 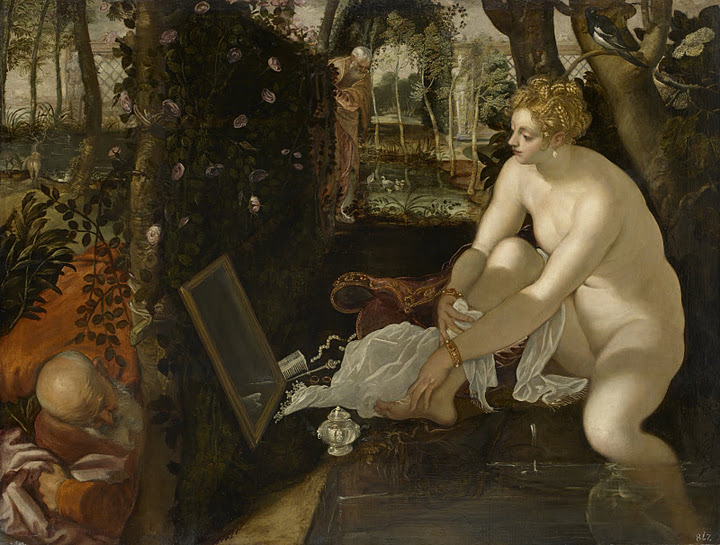 Oil on canvas is still considered by most to be the most “noble” medium of all, judging by the interest of museum-goers and auction prices. The de Young takes no shame in showing the works of the Venetian masters as first and foremost objects of desire, or precious objects: the galleries’ walls are dark red (which creates an ambiance of complete shutoff from the outside world), and each painting is individually illuminated, like a piece of jewelry in an expensive store. The display invites you not only to contemplate, but also to get lost in each painting. That is not in itself a bad thing, though it provides an argument for the detractors of contemporary art who claim that “classical” art makes you forget about your daily problems and escape into the eternal/sublime, whereas contemporary work thrusts all the un-niceties of the world upon you. In the de Young you do not think about the sublime, though; you think mostly of the spectacular. And about the materialistic, in many registers: from the artists’ voracious experimentation with pigment to their mad attention to textures to their close connections to the powers-that-were.

After being intoxicated by such a heavy dose of power, dizzying complexity, extreme riches, spectacle, and myth (and claustrophobia, too), you go up the stairs and head to a room where a completely different experience awaits. In a small, well-lit space, little black-and-white photos hang on simple white walls; that is the exhibition of works by American photographer Ralph Eugene Meatyard (1925-1972). Those, in contrast, make you think about small things–namely, family units. That is logical, since Meatyard pointed his camera mostly at family members and friends, and the photographs in the exhibition are of his kids. 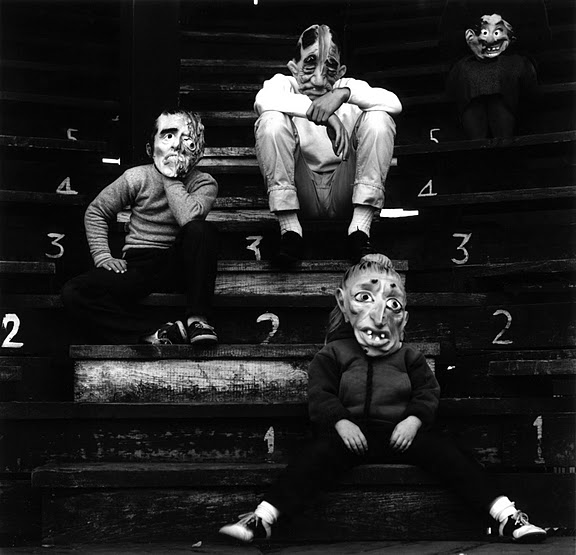 It is known that Meatyard was very well-read and greatly interested in Zen philosophy. Influenced by that, he created elaborate scenarios for his art. The pictures were often taken in or near abandoned houses, with the use of props such as old dolls and weird masks. You would expect something spooky, but in fact, Meatyard’s photographs are anything but–you can basically feel the sunlight in them. What would contemporary parents say about such an unusual form of family fun? Some would definitely praise Meatyard for fostering “creativity” in his kids (so that they could use it in the future, when they enter the world of work). I do not know if that was among the artist’s aims, but somehow I want to see Meatyard’s art practice as outside the category of practical use. And that compels me to view his pictures as little instances of freedom. Meatyard never became a full-time artist (he worked as an optician in Lexington, Kentucky), but in his small-scale work you see more freedom than in the output of many professional “creatives,” just because it embodies unmonetizable time.