The Left Coast Leaning performing arts festival, organized by the YBCA in conjunction with Youth Speaks’ Living Word Project, kind of oscillated between the two poles of pure visual enjoyment and entertainment, and perplexing uncomfortableness. On the one hand there was the dazzling spectacle of virtuosic tap dancing by Jason Samuels Smith, on the other there was a strange and brain-taxing performance piece by Anna Martine Whitehead. Between were the three remaining works, which attempted both to entertain the viewers as well as elicit an emotional response. Interestingly enough, all three were about love.

What? Love, you say? The prominence of that theme was a little bit surprising. In the current moment, with the country electrified by Occupy, you might expect to see things that are more political than romantic. But that is not to say that Left Coast Leaning strayed far from the zeitgeist. At least two of the pieces explicitly dealt with love in the contemporary world, and one was a response to fairly recent events–namely, Proposition 8. 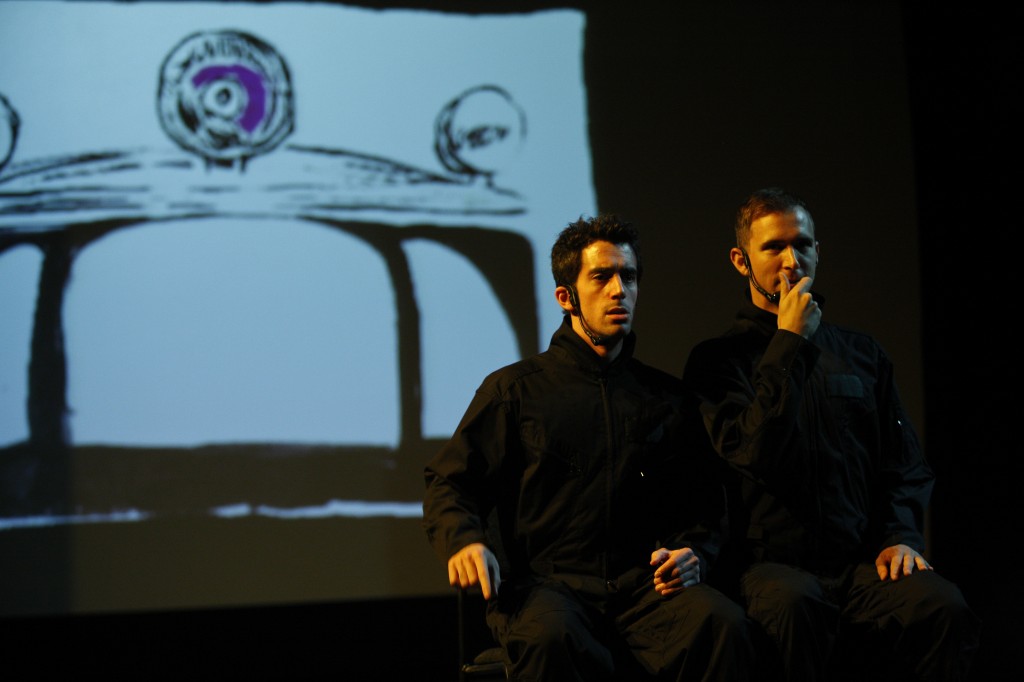 That work, by Alexandro Segade, was inspired by the sight of two boys protesting against Prop 8. They had skull-painted faces and carried signs that read “Live in Love… /In a World of Hate.” Out of this inspiration the artist pulled a narrative set in a future world, where gay marriage-enforcing “replicants” hunt “separatists.” The latter feed on each other, possess some kind of supernatural force, and differ from each other in their manners of speech (unlike their replicant nemeses). Utterly hilarious, Segade’s work self-consciously posited itself in a very specific time and place, which means it could only be produced in the here and now. The artist spoke in a hipsterly tone, saturating his work with contemporary cliches: adoption of “toxic Ukrainian babies,” foodieism, and viral videos were just a few. Another level of remove: the whole performance was set like the shooting of a movie, with the artist himself manning the camera and calling the shots. He seemed to insinuate that a timeless story (in this case, love in extremely hostile circumstances) can nowadays only make sense and not look vulgar when it is placed under many layers of artifice. 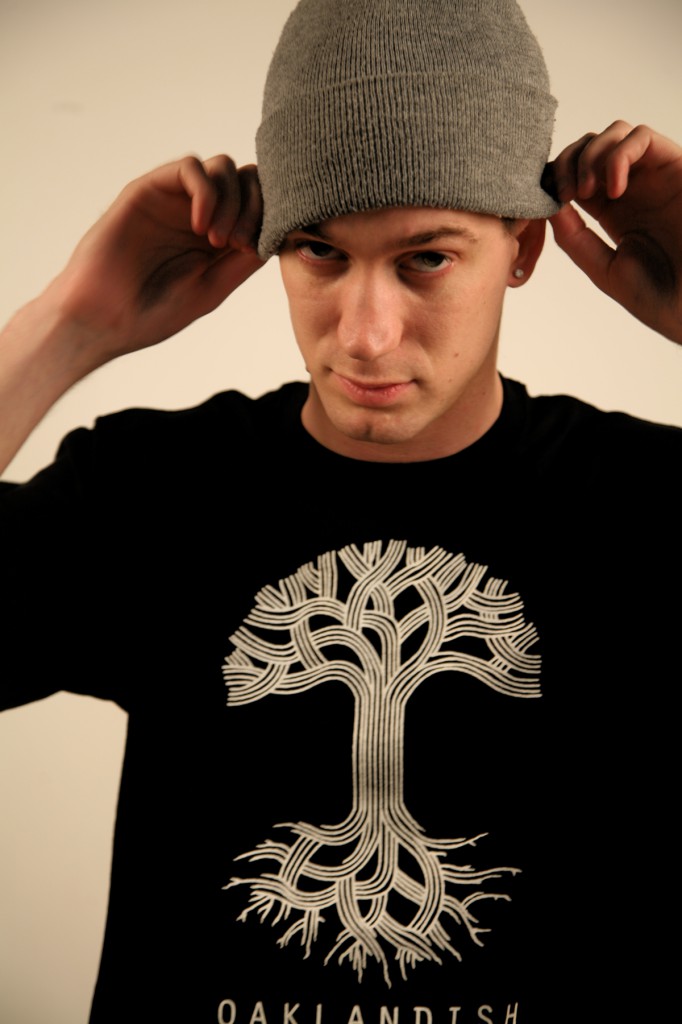 Rafael Casal took the audience to an entirely different place: into the head of a contemporary American dude (yes, I mean “dude”). The performer impersonated three facets of love: Commitment, Intimacy, and Passion, presenting each as a separate inhabitant of the character’s mind. Commitment was a smart-ass, Intimacy was vulnerable, sentimental, and somewhat annoying, and Passion was caricaturally brutish, reminding me at times of the stand-up persona of Joe Rogan. Casal’s performance was so funny that the audience literally roared with laughter.

The dance company tEEth explored love from yet another angle. As I’ve understood it, they attempted to represent the whole range of emotions experienced by two people in a relationship, with all the ups and downs, fascinations and frustrations. On a formal level the work was very intricate and exquisite; during the opening sequence the dancers, Noel Plemmons and Keely McIntyre, filmed each other while moving under a stretched sheet of fabric (the video was projected onto a large screen behind them). Unfortunately, I enjoyed this performance the least, in no small part because I found the musical accompaniment too pretty and sentimental. Although at the end of the piece, in a surprising twist, the volume of the music grew to the level of sonic warfare–only to be stopped by the McIntyre’s scream. It’s like she was saying, “Let’s stop this relationship madness!” 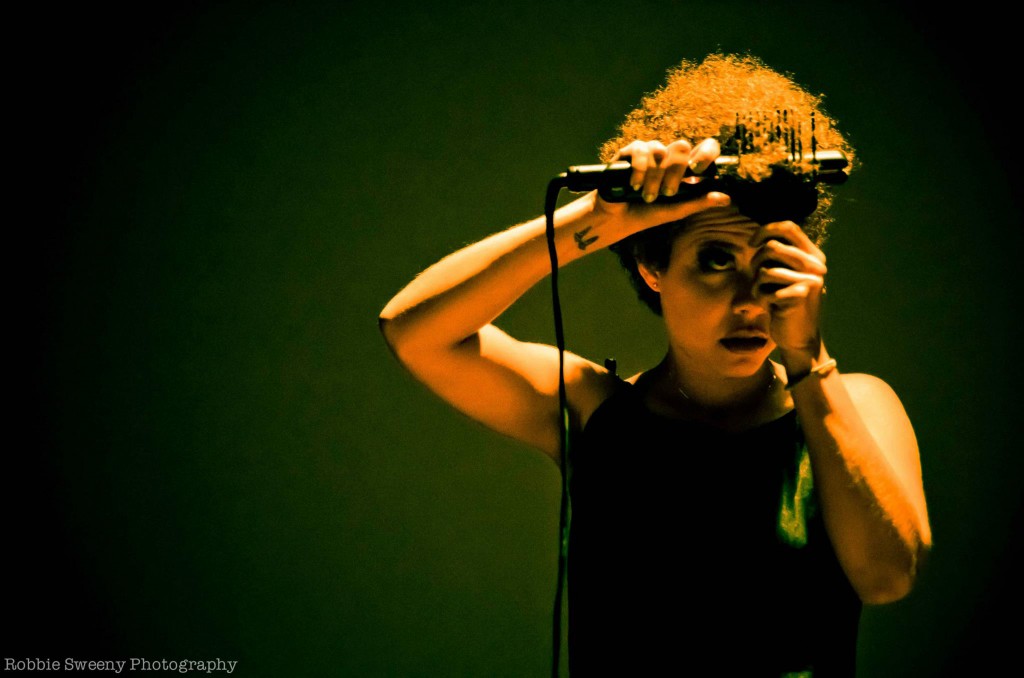 Lastly, I would like to talk about the performance by Anna Martine Whitehead which I mentioned in the beginning. That was quite unlike anything else. The press release claimed that the work (which was called Up Against Nothing) explored “the sexualized black body in the realm of the spectacle,” but I am inclined to view it more broadly, as the problematization of the concepts of “performance” and “entertainment.” Indeed, we generally take this situation – one performs, the other looks – for granted, and do not think about the subtle power relations involved. Up Against Nothing was opaque and unclear. In it, a violent act by one performer (ruthlessly combing her curly hair) could be followed by another’s lively monologue and dance demonstration, which would in turn grow into a grotesque and uncomfortable spectacle (after that, casual conversations and melancholic dancing). The work created a dissonance, sometimes assuring you that “everything’s OK, nothing special,” and sometimes reaching into that “nothing special” to find shame, exploitation, and distress. Whitehead and her dancers, Brontez Purnell and Shawnrey Notto, performed in underwear only, which created a sense of awkwardness and fragility.

The centerpiece of the work was Purnell and Notto’s imitation of cakewalk dancing, which was set against a screen showing an old film about it. At one point the huge word “APPLAUSE” appeared on the screen, commanding you to clap for far longer than was needed. Eventually Notto’s exaggerated smile gave way to despair. She wallowed as if in pain, frantically rubbing her body and sometimes trying to stretch her mouth back into a grin. Later, she and Purnell engaged in a normal conversation as if nothing had happened while stealing pastries from the guests’ tables. Whitehead invoked those stereotypes of the “unruly, wild-mannered, and fascinating Other” and the “hysterical woman” to point us back to our own gaze, which can be discriminating and violent. At the same time there was the sinister insinuation that the viewer is helpless, that he, if commanded to do so, could applaud until his hands bled (I recalled an old anecdote about a speech given by Stalin, where the audience did not know when to stop clapping–the one to stop first would be sentenced to death). In any case, in Whitehead’s performance, a viewer is never just a viewer. Even without participating directly (as in many “interactive” performances) he is tangled with the performer in a complex relationship. To me, Up Against Nothing exemplified what the “Encounter” program, to which “Left Coast Leaning” belongs, is about. The artists who participate in “Encounter” events are those that “engage the social context,” and Whitehead’s work does exactly that–she shows that relations between different members of society are always loaded and never simple.

You can also check out our other reviews of YBCA events:

The Global Within: Indian Art at the YBCA