On Saturday, December 10, the SOMArts cultural center organized its third performance festival, where almost 100 artists presented two-minute works in a square hole in the main gallery. Truth be told, I did not manage to see all the pieces. But from what I saw, there were enough intelligent performances for the event to be classified as successful. The festival was San Francisco at its punky best: very sexual, very queer, and very goofy. Goofy to the point where I started to crave at least one piece that wouldn’t elicit roaring laughter from the audience. A surprising amount of artists engaged the hole as a space for the abject.

As historian Hal Foster writes in his book The Return of the Real, the abject (theorized by Julia Kristeva) is “a fantasmatic substance not only alien to the subject but intimate with it–too much so in fact, and its overproximity produces panic in the subject.” It is what a person expels in order to define him- or herself. “Artists of the abject” often subvert “paternal law” and imposed order with the use of the repellent, the disgusting, and the embarrassing. Not always pleasant to watch, this art definitely pushes you outside your comfort zone, especially when there is some kind of violence involved. A number of artists in “100 Performances” embedded symbolic violence into their pieces, while assuming the role of “infantiles” (a typical pose for an artist of the abject) or holy fools. 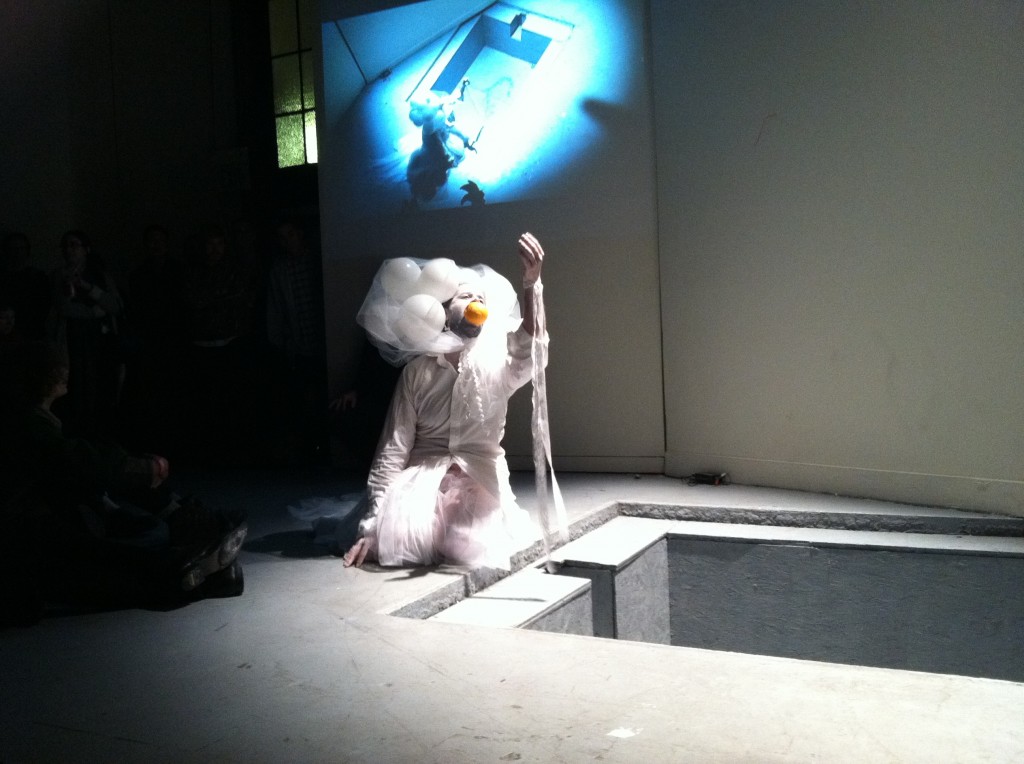 Case in point would be the work by Christopher Foster, called Solemn, in which the artist seemed to perform as a lovestruck bride to the orange he held in his mouth. He gnawed at the fruit while rolling on the floor, representing love as something violent, primal, and base, which could be equated with consumption. Consumption and violence were also invoked in Jx Marie’s Milk and Honey, where two men held the (screaming) artist down and the third poured milk and honey on her face, which was covered by an American flag. A sight bordering on the pornographic. 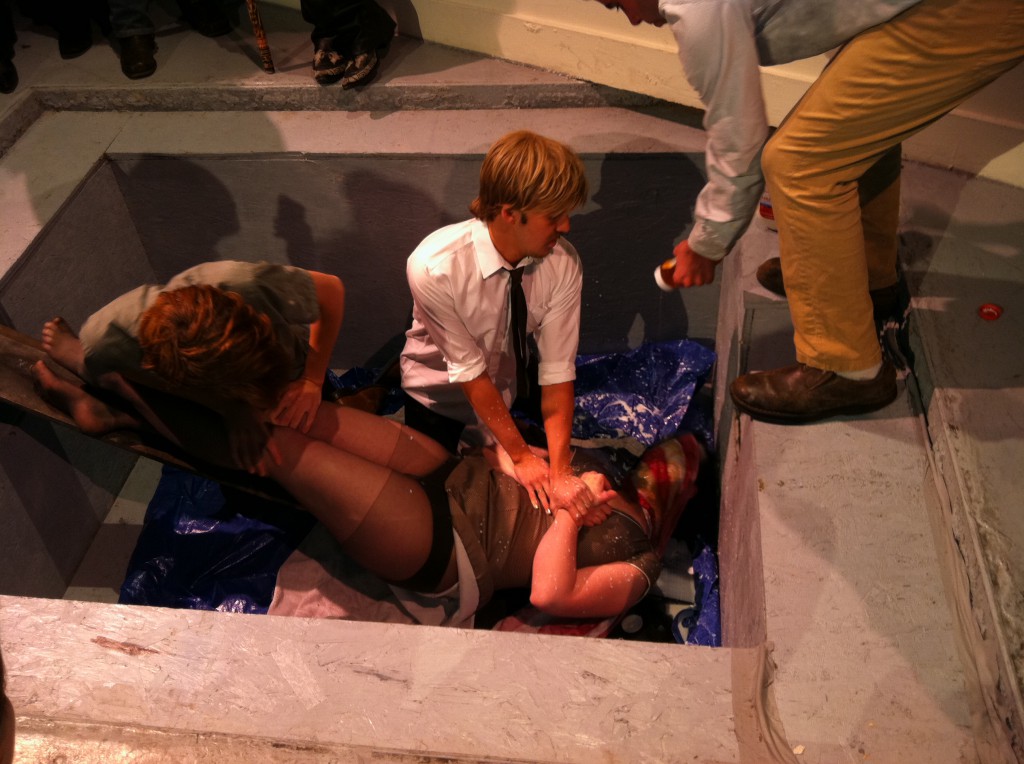 Many participants reflected on what it means to be an artist today. Casey Hart, for example, offered a grim variant: the artist as a sad hipster clown to whom no one listens and whose actions and words provoke only annoyance. He offered the audience tomatoes which could be thrown at him while he impersonated a “potentially funny comedian.” It must be said that the tomatoes were not rotten but fresh and firm like apples, therefore, throwing them meant causing pain to the artist. And the audience did exactly that–with glee (nobody, apparently, likes a hipster who talks about how much he hates the bus system).

Marion Hunt and her collaborators seemed to enumerate and fulfill the demands placed upon artists. 1. To be successful, the artwork needs to be sexy (whatever that word may mean): the artists performed half-naked. 2. It should be queer: androgynous boy in a garter belt. 3. It should be cryptic and make no sense: Hunt’s piece certainly doesn’t–two of the three performers were blowing powder in each other’s faces. 4. The artist should put some real labor into the piece: the performers swept up their powder afterwards. 5. The artwork needs to be useful: cleaning up after yourself is very useful! In a similar humorous vein, Jennifer Locke explicitly made clear that the (relatively) long and boring setup was part of her performance, the “main act” of which consisted of breaking bottles on her head. By doing that, she pointed to those innumerable work hours that people in the art world spend on creating or reflecting on some apparently stupid objects or actions (sometimes those work hours are actually the artwork).

Staring Contest by Tim Roseborough, similarly ironic, explored the construction of the “public image” of the artist/ intellectual. He struck some beautiful poses for the camera, his stance implying that he was speaking before an audience. If anybody saw only the photographs, they would think he indeed was giving an inspiring talk. One could see Roseborough’s piece as a poke at “poser intellectuals,” behind whose words is nothing. It could also be seen as a paranoid critique of documentary photography, i.e. “what you consider to be truth is all staged.” 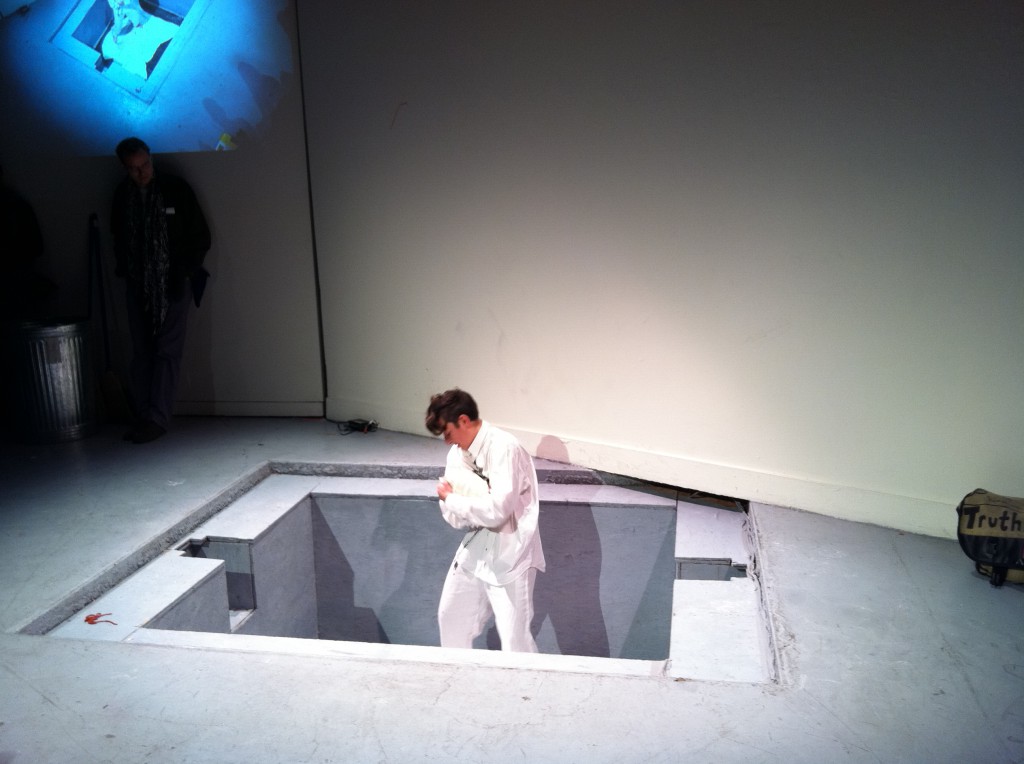 A lovely performance by Sarah-Dawn Albani, Haunted Woman Slides Between, looked like it wanted to convey some existential truth about the creation of art. The artist, all in white, cradled an unidentified object like a baby, squeezing it tighter and tighter, so that a nasty black substance would come out of it (abject, indeed). It was a nice metaphor of art as something that’s never clean: you squeeze it out, and it marks you.

Albani’s performance was one of the works that had the ghost of painting hovering over them. I recalled a performance by Chiharu Shiota called Becoming Painting in which the artist bid farewell to her early painting practice by transforming her own body and the space around her into canvases for blood red gestural paintings. In “100 Performances,” ex-Butoh dancer Terrance Graven presented a ritualistic act in which he “painted” the floor of the hole with putrid white liquid he spit out of his mouth. Another work that echoed Viennese actionism’s grossness and brutality featured Liz Miller dressed in white and caked in white powder, doing yoga exercises while something that looked like blood flowed on her from a suspended IV drip. The title of the piece, by the way, was Nerve Cleansing; it seemed like the artist was mocking the obsession with purification of all sorts.

Painting, especially “action painting,” is notorious for its associations with the virile; in The Painter, Paul McCarthy (the godfather of abject art) provided a satirical image of an abstract expressionist artist painting with his sex organ. As for figurative art, when a nude model is present the subject of “objectification” may come up (see SOMArts’s recent show “Man as Object”). Jenalee Harmon decided to comment on all that: she phallicized her camera by taping it to her crotch, then took extremely close-up portraits of volunteers she had invited to the hole. The viewers looked quite embarrassed–it was they who seemed to be objectified, even though the artist was butt-naked, and they weren’t.

Yes, “100 Performances,” at least what I saw of it, was big on naked or half-naked bodies and smelly substances. But that wasn’t all there was, of course. One of the most memorable performances was Llovizna de Cobre–Copper Mist by Pete Ippel, in which the artist invited the audience to throw coins at him while he danced and sang with an umbrella. And when his two minutes were over, he completely killed the mood by saying that two pennies is how much an Indian tea-picker earns for an eight-hour day. The dead silence that engulfed the audience after that pronouncement was worth all those pennies.