With 2011 coming to a close, it’s an appropriate time to look back at the year in sports and reflect on what we’ve seen. The following is a list of the top 10 moments of the year. Now I realize there might be certain sports missing from this list. Well, I admit that I’m biased. I refuse to watch people drive around in a circle for four hours. So no, there won’t be any NASCAR related stories here. But as for the rest of the list…

The former #1 golfer in the world had a rocky 2011. Tiger missed several months with leg injuries, and was once again shut out in the major tournaments. He fired his longtime caddy Stevie Williams, with whom Tiger had won 13 of his 14 majors. But Tiger ended the year on a good note, winning the Chevron World Challenge, his first victory on tour in over two years. With momentum heading into next year, Tiger’s quest to reach Jack Nicklaus’ 18 major wins will certainly heat up. 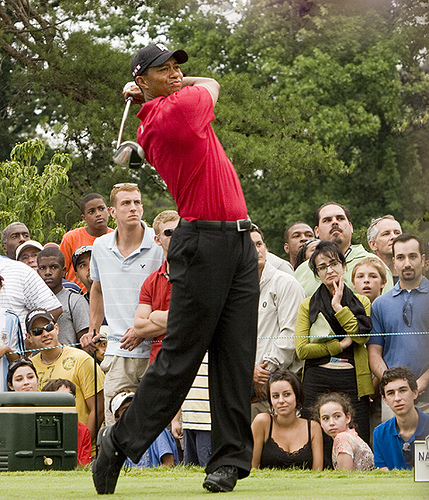 In an unprecedented and shocking development, the BCS system has led to a controversial title game. With LSU as the only undefeated team, the secretive BCS formula chose to give Alabama, and not Oklahoma State, a second crack at the Tigers. Because the first match up between LSU and Alabama was so boring, other stations will offer alternative programming during the game. CBS is in negotiations to air a recording of paint drying, while ABC plans to counter the title game with a video of grass growing.

My vote this year for the Most Valuable Player goes to Peyton Manning. This might come as somewhat of a surprise, considering Manning has yet to play a single snap this season. Well think about this; the Colts have won at least 10 games every year since 2002. Take Manning off the field, and the Colts have yet to win a game this year in 13 attempts. With Manning playing, the Colts are at least in the hunt for a playoff spot.

The St. Louis Cardinals had one of the most impressive finishes to a season in baseball history. They won 23 out of their final 32 games just to make the playoffs. They beat the heavily favored Philadelphia Phillies and Milwaukee Brewers in the opening rounds. They were down to their last strike of the season against the Texas Rangers, but battled back to win Game 6 of the World Series and went on to win the series in seven games. But despite winning the fall classic, the Cardinals lost the heart of their team when Albert Pujols bolted to join the Los Angeles Angels. The “alleged” 32-year-old first baseman signed a 10-year contract for over $250 million.

After the Big-10 and Pac-10 got makeovers last year, the dominoes continued to fall in 2011, with dozens of teams jumping ship to join new conferences. Missouri in the Southeastern Conference? San Diego State and Boise State in the Big East? The recent wave of conference realignment in college football has reached the absurd stage. These switches are further proof that everything is about money. At the very least, the names of the conferences should be updated.

Aaron Rodgers is having a pretty good year. He began 2011 by leading the Packers to a victory in Super Bowl XLV. He’s been even better this season, as the Packers are still undefeated at 13-0 and are a heavy favorite to repeat as champions. Rodgers has established himself as the best player in the game and is a shoo-in for the 2011 NFL Most Valuable Player.

The Miami Heat came awfully close to delivering one of the multiple championships they arrogantly promised prior to the 2010-11 season. But they ran into an unstoppable Dirk Nowitzki in the NBA Finals, who lead his Dallas Mavericks to a 4-2 series victory. Not only did the “Big Three” fall short on the biggest stage, LeBron James completely disappeared when it mattered the most.

Tim Tebow is cat nip to the national media. Love him or hate him, it’s hard to argue with what he’s done. Since taking over the reins of the Denver Broncos offense, Tebow has led the team to seven wins in eight games. Once an embarrassing last place team, the Broncos are now in a position to make the playoffs. But before we enshrine Tebow in the Pro Football Hall of Fame, let’s first see how he does in the postseason.

In a truly horrifying story, former Penn State defensive coordinator Jerry Sandusky was charged with 40 counts of sexual abuse. Due to the way Joe Paterno handled the situation, the legendary head coach was dismissed from Penn State after over 40 years on the sideline. Paterno, who is the all time leader in Division I football victories, also won two national championships during his tenure in Happy Valley.

Both the NBA and NFL had lockouts this year, but both were able to avoid any major damage. Billionaire owners and millionaire players fought over the new collective bargaining agreements. The bickering became reminiscent of a game of Hungry Hungry Hippos, with each side trying to ferociously gobble up as much money and power as it could.

The NFL lockout lasted just under five months and only one preseason game was missed. The NBA lockout lasted roughly the same amount of time, but the work stoppage wound up cutting the season from 82 to 66 games. Despite all the arguing and the massive egos involved, at least the preseason was all but eliminated.

Let us know your thoughts on this Top 10 list.
Follow us on Twitter and like us on Facebook to give us a shout. You can also stay on top of exciting events from around the world by downloading the eventseeker app for iPhone, Android or Windows.