This week, Goldenvoice announced the Coachella Valley Music & Arts 2012 lineup(s). It is a stacked lineup featuring the Black Keys, Radiohead and Dr. Dre & Snoop Dogg as the headliners. Attendance at music festivals in the last few years has seen a noticeable spike (festivals like Burning Man, Glastonbury, Bonnaroo, and others like it keep selling out in record time), and this year’s Coachella will probably make the biggest showing yet. After the 2010 edition of the festival, Goldenvoice learned that increasing the number of available tickets was not the best idea, and needed to find better ways to facilitate growing demand. Then shockingly, it only took six days after revealing the lineup last January for the 2011 edition to sell out.

Taking these matters into account, Coachella organizers took efforts to prevent either of these results from happening again in 2012. The solution: last June, Goldenvoice announced that Coachella 2012 would be held over the course of two weekends. At the time of the announcement, not only did Goldenvoice make three-day festival passes available in an advanced sale for only one week, they also mentioned that the layaway program that was first introduced a few years back would only be available during that week. The big idea behind this move was to allow everyone who wanted to go to Coachella just that opportunity. So this year’s festival, or festivals, will take place on April 13-15 and April 20-22, and Goldenvoice promises to create the same experience for both weekends.

“We will attempt to produce two identical festival weekends,” the festival posted on its website at the time. “That means same lineup, same art, same place, different people.”

Many of this year’s attendees will be making their first pilgrimage to the Indio desert this April. After the jump are five tips to get you prepared for one of the greatest music festivals in the world. As someone who has the made the pilgrimage every year since 2009 , I’ve come to learn something new every year. If you’re a Coachella veteran as well, take a read and maybe learn something new, or add something below in the comments. 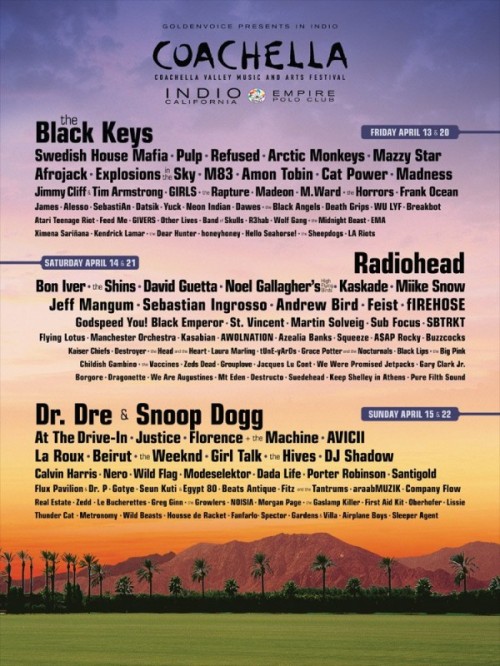 Trailers, RVs and U-Haul Trucks are NOT allowed.

You’ll be camping in the desert for about half a week, if not longer. Let me repeat that: camping in the desert! The heat during the day will be inescapable. Take care of yourself and your friends, and make sure everyone stays hydrated. Also, you will not only be living in the desert, you will be partying in the desert. Making it through any music festival, let alone Coachella, requires pacing yourself. This is a marathon, not a race. So prepare for Coachella as you would for a 10K, and take the extra precaution of getting your body in shape for such conditions.

THE SHADE IS YOUR FRIEND.

Arguably, the biggest complaint people have about attending Coachella is the heat, and as noted above, the heat is inescapable. It’s mind over matter, because if you don’t mind the heat, then nothing else matters. As soon as you resolve yourself to just deal with the heat, you’ll be able to focus on coming up with a way to figure out the logistics of cramming all of your stuff in that 10×30-foot space that each individual car-camping spot is afforded. Obviously, having more people in your campsite will likely mean multiple-car camping spaces. This is where all those years of playing tetris come in handy! So get creative.

Keep in mind these facts: the temperature starts to rise around 7/8 am, so if you’re sleeping in a tent with nothing above it to help block out the sun, your tent will essentially become a sweat box. So bring a canopy, or better yet, canopies, that will cover as much of the 10×30-foot space as possible. Keep in mind that tent-only camping is 10×15 feet.

Get real familiar with the campground rules. If you are camping, rules state that you cannot bring in any alcohol inside of a glass container. That doesn’t mean you need to resort to the “premium” whiskey in a plastic jug from the nearby Ralph’s grocery store that will burn your esophagus to dust and make you feel like you’ve just filled your stomach with jagged metal Krusty-O’s; it just means you need to get creative with the vodka you may or may not plan to sneak in. Subtle hint: from afar, vodka looks a lot like water. A. Lot.

Another rule to be well aware of is the fact that the amount of cases of beer (cans) that you can bring in is limited to the number of people in the car, which means that if there are four people in a car, then your company is only allowed four cases of beer. Subtle hint: Zip-ties are an excellent tool to help you hide any extra packs of beer you may think about sneaking in.

There will be security lines to enter the campgrounds in which your entire vehicle will be searched. This line can be quite long, but as you get closer to the front, most everyone around has already gotten the party started. So do the same and open up some of those cans of beer that you and your friends brought in with you. Just you know… everyone but the driver.

Important: You have to be at least 18 years of age to camp in car-camping, and if anyone in the car is younger than 21, you are not allowed to bring in any alcohol whatsoever. Nah-uh. No-way. No-how.

Chances are that you, dear reader, have been to some sort of large scale festival of some kind, be it music, food, tapestry, Shakespeare festival or garlic festival, and this should serve you well in dealing with the large crowd. Coachella, however, is a different monster all together. In fact, the best way to prepare yourself for Coachella is to simply embrace the sheer enormity of it all. Cell phone reception is going to be spotty at best for most of us, which essentially means cell phones for the majority of the people in your group will magically turn into pretty paperweights. There are tons of art fixtures scattered throughout the festival grounds, so pick out something pretty to be your meeting spot–the Tesla Coils or the giant mobile speakers that pump out lots and lots of bass should suffice.

WON’T YOU BE MY NEIGHBOR?

My first Coachella was in 2009. By this time, a few of my friends had been to Coachella multiple times, but what made 2009 a unique experience to all of us was the fact that we made friends with our camp-site neighbors from Iowa. Since then, our campsite has grown to what sometimes feels like Pangaea. I mean it when I say that that is not hyperbole. Not only have we made it a point to camp together at Coachella every year since, we all have become really good friends beyond just the festival.

Coachella will always put out a varied and diverse group of musical acts that everyone is bound to enjoy something. But as important as music is to us, the lineup is just the icing on the cake. Coachella is an adventure, and your adventure is only as enjoyable as you make it with the people who you are with. Arguably, this aspect of the whole experience is what is most important. I go to Coachella every year regardless of who is or isn’t on the lineup, and because more than anything else it’s a chance to have a great, big adventure out in the desert with my best friends.

Final Tip: If you’re able to go, then soak in the experience for all that it’s worth. Think of Coachella as that special inside joke that only those in attendance will ever really understand. Whether you’re a Coachella veteran or a Coachella virgin, just know that every year is a completely different experience, and that’s not even taking into account the fact that there will be two weekends this year.

Tickets to this year’s festival go on sale this Friday at 10am PT. Though they may take longer than six days to sell out, I wouldn’t hesitate on picking them up as soon as possible.

Are you going to Coachella in April? Let us know! Follow us on Twitter and like us on Facebook to give us a shout. You can also stay on top of exciting events from around the world by downloading the eventseeker app for iPhone, Android or Windows.