One of the foremost innovations of 20th-century visual culture was that art started to look humble. Seeing Kurt Schwitters’ fragile little collages, made out of various scraps and trash, at the Berkeley museum a few months ago was like an invigorating slap in the face. Schwitters worked in the first half of the century, and after him, in the 1960s and 1970s, was the breakthrough era for performance art, with scores of artists around the world discovering they could make powerful statements using no more than their own humble flesh. But I’m leaping ahead here–performance is what we’re going to be talking about in February, when the Berkeley opens “States of Mind: New California Art circa 1970” (I can’t wait, really). This month, the museum is showing ephemeral work by two artists associated with mid-century Pop art: Ray Johnson (mail art) and Andy Warhol (polaroids). Both exhibitions stray away from the logic of “genius” and “masterpiece,” emphasizing the importance of communication and artistic exchange. Also, both of those practices–sending letters, taking polaroids–are largely extinct by now, so the exhibitions will probably prompt reflection on “what it all meant for our culture.”

SFMOMA‘s SECA Art Award show features a number of interesting works by noted Bay Area artists. If you’re eager to know more about them, exhibitions at some of the city’s commercial galleries might help. If one “What the hell?” at Josephine Taylor’s drawings of tortured figures was not enough for you, head to Catharine Clark Gallery, where the artist has a show until February11. Those who were mesmerized by Mauricio Ancalmo’s installation–an inventive paean to nostalgic devices and obsolete technologies–might want to check out his exhibition at Eli Ridgway. Haines Gallery has mounted a show by Kota Ezawa, who questions the power of photography to convey truth by drastically reducing famous images to basic shapes and colors, rendering our lowest-common-denominator view of history and culture as stylishly illustrated fiction. The work of John Bankston, now on view at Rena Bransten, is similarly playful (in fact, it is visually akin to children’s coloring books), but it explores complex themes, such as the phantasmagoric relations between man and machine. 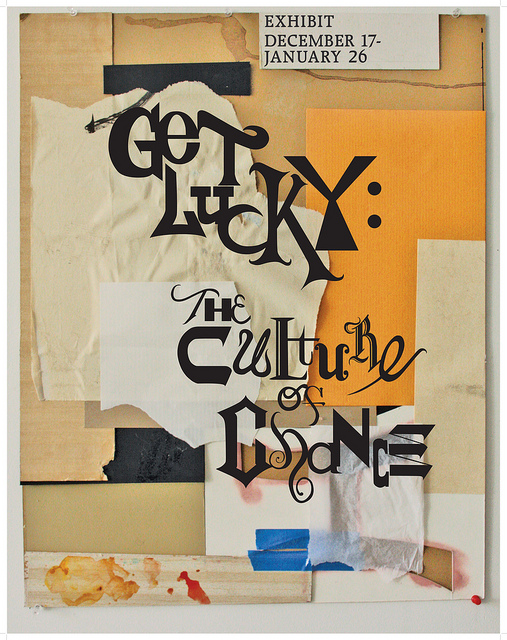 This year we will no doubt hear a lot about seminal avant-garde composer and artist John Cage, since 2012 marks 100 years since his birth. SOMArts is celebrating with an exhibition themed around the Cage-extolled “principle of chance.” Even without Cage’s big name aura this theme is über-important, because our well-being depends on chance: I’m talking, of course, of the crazed gambling on the financial markets. I haven’t seen the exhibition yet, but they say that works about finance are included.

John Baldessari is one of my absolute favorite artists. To borrow a phrase from one of my friends, his work is “stupid intelligent.” No more, no less. Using the simplest and most elegant of means, the Californian artist carefully examines the way we see things, the way we strive to create narratives, and the way mass media conditions our perception. And his best works are also extremely low-budget. For the exhibition “John Baldessari: Class Assignments, (Optional)” CCA Wattis students created works based on Baldessari’s notes from the time he was teaching “Post-studio art” at CalArts. At the very least, the results promise to be curious.

It’s a shame that our esoteric stuff-loving city has never seen works by Remedios Varo before. After all, she was one of the most brilliant ladies of Surrealism (her work will be explored in depth at a LACMA exhibition which also opens this month). Varo spent her childhood and youth in Spain, fleeing to France during the Civil War. In 1941 she moved to Mexico, where she befriended such figures as Frida Kahlo and Leonora Carrington. Varo’s luminous paintings feature fascinating (often female) characters engaging in mysterious alchemical activities. It’s also useful to remember that Varo was an anarchist. A conference about her work will take place on January 18 at the Yerba Buena Center for the Arts.