On Sunday, Drink:Eat:Play’s Bay Area Cupcake Challenge filled the Mezzanine with a bevy of cupcake-crazed girls. (There were some guys there, but not many.) The hot accessory of the day? Tupperware. Anyone without a take-home box quickly felt like a fool, as there’s no way you’d be able to consume 26 heavily frosted cupcakes in one sitting. Mission Minis was there, along with Sift, winner of the Food Network’s Cupcake Wars. Personally, Love Bites and SweetCakes were the bakeries that got me really excited. Read on for my breakdown of the official winners and my own special awards, along with some glittery cupcake porn. 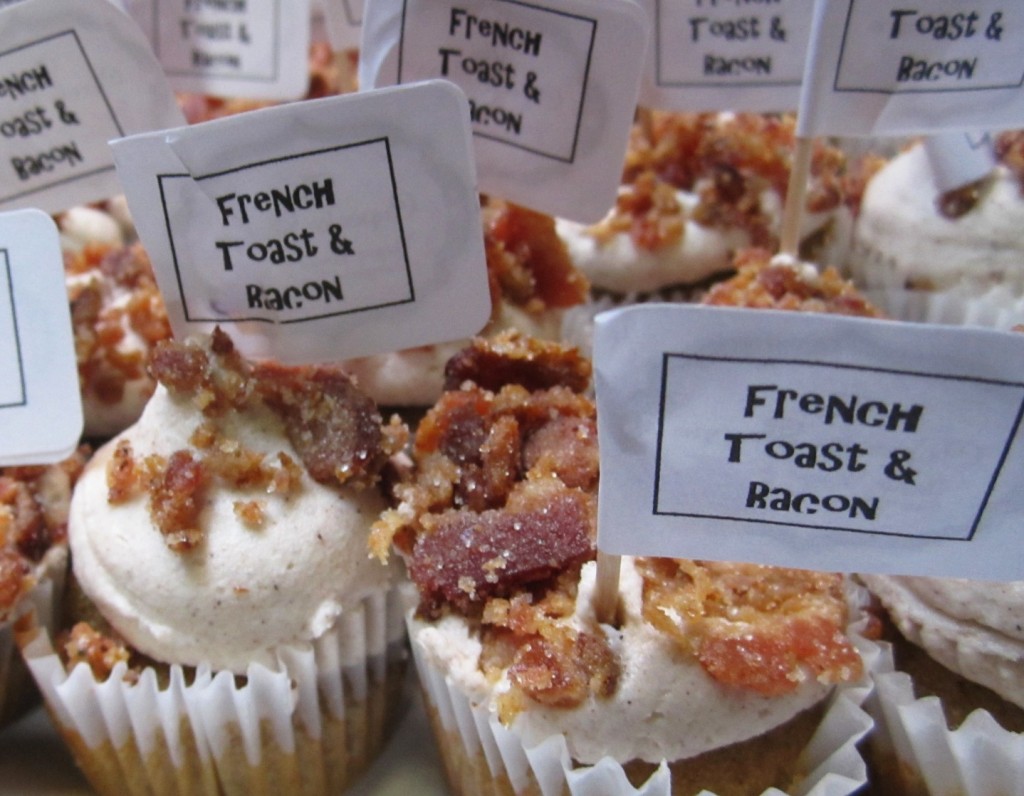 French Toast & Bacon did the trick for a majority of the crowd, nabbing top accolades at this year’s event. This salty sweet combo took the salted caramel cupcake idea to the land of the bacon sprinkle. While I must concede that being able to legitimately have cupcakes for breakfast sounds like a divine idea, this cupcake was a bit too greasy for my taste. Based in Hayward, The Cupcake Shoppe sells sweets online.

Sadly, you can’t satisfy your spontaneous Love Bites cupcake craving by walking into a shop and purchasing one. Based in Oakland, Love Bites currently only allows customers to place their orders online, preferably 48 hours in advance. However, Kathryn Le’s labor of love is probably going to get much more popular after news of her win spreads. She and her team brought snickerdoodle and salted caramel cupcakes to the party, and boy were they (her staff and her cupcakes) dressed to impress. The snickerdoodle cupcake (pictured on the left) was my favorite with its cinnamon cream cheese frosting and perfectly baked cake. Salted caramel usually isn’t my thing, but this cupcake completely won me over to the idea. Sweet simplicity still takes the cake!

Sif’t’s Battle Royale cupcake took the Cupcake Wars crown (pictured above right). It’s an “Almond Cake filled with Blueberry Tequila Jam & Topped with Acai Berry Frosting.” The jammy filling inside was surprising, as was the somewhat tart, fruity frosting. The glittery pink cupcake pictured next to it is the Pink Champagne cupcake. These weren’t my personal favorites, mainly because I felt the cake was too moist and doughy, but the flavors and presentation were definitely spot on. The shop has locations in Napa, Santa Rosa and Cotati.

SweetCakes’ cupcakes were some of my favorites, mainly because the simple flavors really punched through. Pictured left is the Chocolate Vanilla Cupcake, and pictured right is the Strawberry Cheesecake cupcake. The chocolate cake was dense and rich, and was balanced by the fluffy vanilla whipped cream on top. The Strawberry Cheesecake was particularly refreshing because of the fresh, strong, strawberry flavor. The owners take pride in using locally sourced ingredients, and it shows. You can find them in Redwood City.

Though the official winners were definitely the best cupcakeries at the event, there were some bakeries I felt should have been mentioned, though not always for the best reasons. Here are two categories I believe should be adopted for next year’s event:

All the frosting at this event had me googly eyed. I was simultaneously licking my fingers and craving a toothbrush. However, one icing towered above the rest in both form and flavor. 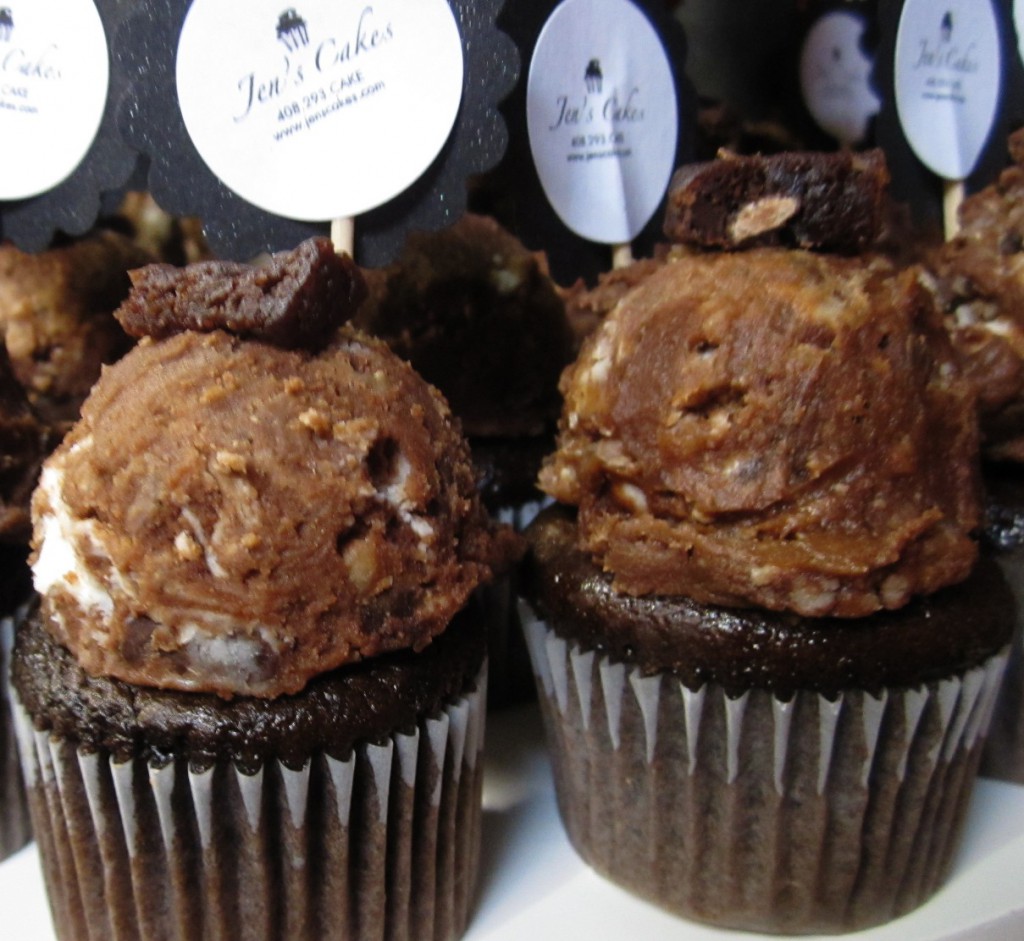 This little wonder comes from Jen’s Cakes, a cake catering company based in San Jose. The Chocolate Craving cupcake is topped with a scoop of chocolate buttercream icing mixed with bits of toffee and mini chocolate chips, on top of which sits a piece of fudge brownie. A tub of this frosting, a spoon and a box of tissues would get me through heartbreak, easy.

THE OMG WHY CUPCAKE

When I was scanning the list of cupcakes that were on offer, a few of them stood out in particular. Angel Cakes brought a bit of a party atmosphere to the event with the Mojito Cupcake (it was meh), while the Cupcake Shoppe brought a brunch sensibility with their French Toast with Bacon cupcake (the winning cupcake). While the aforementioned may be a bit out of the box, they still sound quite appetizing. Kingdom Cake‘s offerings were a bit of a different story. 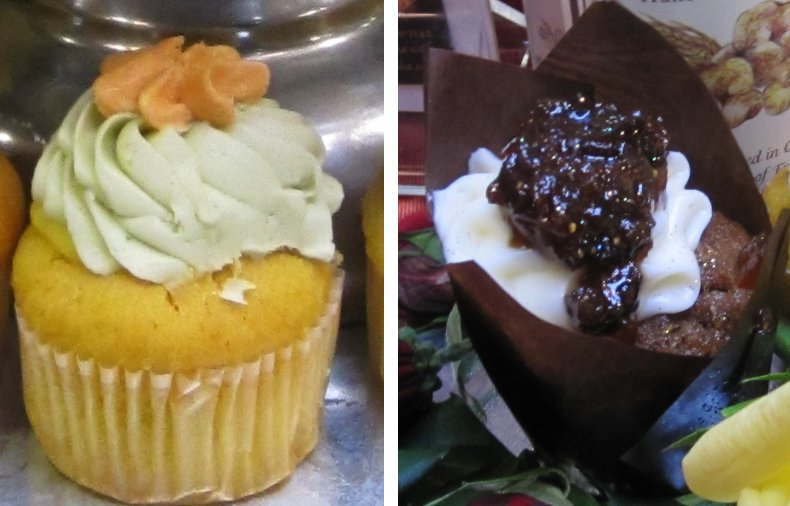 Kingdom Cake had two over-the-top entries: the Figgy Pear Gingerbread with Gingerbread Cake, Vanilla Cream Cheese Frosting, Fig, Pear, Meyer-Lemon and Vanilla Bean Preserve (above right); and White Truffle Surprise with Butternut Squash and Truffle Cake, Pineapple Custard Filling, Sage Buttercream Frosting and a Hint of Truffle Buttercream Frosting (above left). The Figgy Pear Gingerbread was okay, not that I could taste all of what went in there, but the White Truffle Surprise was, as my coworker Landon put it, “Worst in Show.” The truffle flavor was overwhelmingly present, and by the end of the chew, the flavor of the sage frosting took over my tongue completely. The pineapple custard was in there, somewhere, as was the earthy squash, but they both got lost between those two ultra-strong flavors and didn’t mesh together at all. Truffle oil, unlike bacon, does not make everything better. The bakery delivers to the San Francisco Bay Area, and as you’ve probably assumed, they’re able to accommodate just about any flavor preference.