There’s no question that combining music and comedy is a difficult road, usually resulting in a not-funny-please-turn-around-dead-end. In the past, when I’ve heard comedy songs, I’ve thought, “How limiting.” I’ve been of the belief that a song will always be better as a song and a joke will always be better as a joke–to mix the two is to create too many boundaries to force the genres in.

Well, I was wrong. This past Wednesday night, I went to Mezzanine to catch Garfunkel & Oates and Reggie Watts, here for SF Sketchfest, and both performances thrived off of their crossover genres. 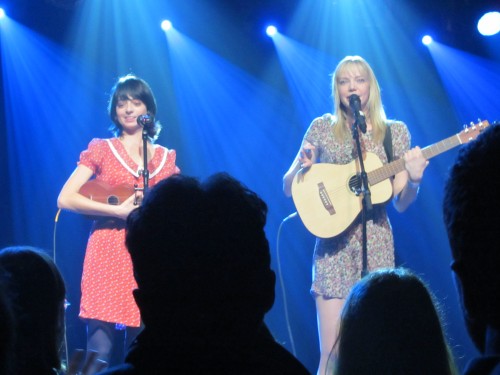 I think what makes this comedic duo so effective is that they know how to catch the audience off guard. For instance, at Mezzanine, they both were wearing sundresses, smiling broadly at the audience and bopping their heads in rhythm, while singing lines like, “B*tch, I don’t really care / I was being polite / Since you have no life now / That you’re pregnant” (from the hilarious song, “Pregnant Women Are Smug”). The bite of their lyrics is so much sharper when they’re smiling innocently at the audience. They have mastered the line between sweet and acerbic, playing up the sweet in order to magnify the acerbic, all the while performing tunes so catchy that you leave humming them. 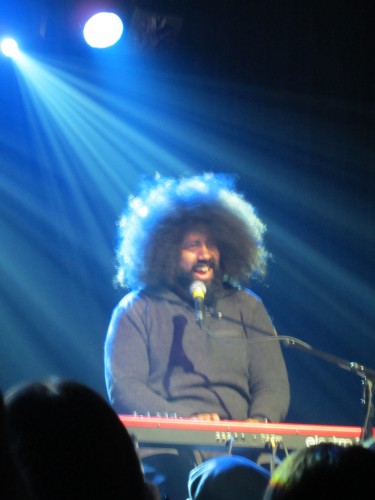 While Garfunkel & Oates use the form of songs to magnify their jokes, Reggie Watts seems to follow no form whatsoever. His act was a steady stream of improvised characters and loop pedal a cappella creations, not to mention a hilarious dance sequence, a monologue from behind a curtain and an encore. If that sounds nuts to you, it was. It took me about half his set to get it through my mind that it was only him up there. The sounds he makes with his mouth, and then plays back while creating more sounds, are so astounding that you can barely believe there aren’t instruments. He had the audience so completely in the palm of his hand, in awe over what he was going to do next, that his long set felt like it was over in five minutes.

One of the things about Watts’s performance that I found interesting was, after I left, I said to my friend how funny it had been. But then, I took a second and realized that I hadn’t laughed much. While Watts performed, I was so blown away by his talent and sheer disregard for conventional comedy that I spent most of the time with my mouth open in wonder–but not in laughter. And yet, when I left, I had the sense that he had been really funny. His humor snuck up on me. While there, I tried too hard to understand how he was doing what he was doing (a futile exercise). But then, once I left and thought back to the show, I found myself cracking up at his facial expressions, his song dedicated to potatoes (or, tubers, as he called them), his abrupt transitions, his imitation of a high school girl, his extended riff in Old English… I could keep going, but I won’t. The point is that his act was so limitless that I kept trying to put limits on it–I wanted to figure it out. I wouldn’t do that next time. Next time, I would kick back and watch in complete astonishment and allow the humor to take the forefront.

To sum up, all I can really say is, Well done, SF Sketchfest. This performance was boundary-breaking, hilarious and inspiring. What else could you really ask for?