There’s a genuine intimacy at Bottom of the Hill. The kitchen, outdoor smoking patio and back room fireplace make for a cozy enough experience, but when the band you’re waiting to see is walking through the audience and watching the opening acts perform, the walls between artists and fans are broken and a degree of unity sets in.

For most of the night the four members of Poliça, including front-woman Channy Leaneagh, roamed the venue, taking no notice of the growing number of doe-eyed concert goers. I first heard the indie R&B group at the end of 2011 and I was immediately reminded of Gayngs, the super group put together by mastermind Ryan Olson. Olson recognized something special about Channy’s contribution to Gayngs and came up with the idea to start a new project with her as the focal point. Whereas Gayngs is a melting pot of several talented individuals, Poliça features Channy as the main ingredient. 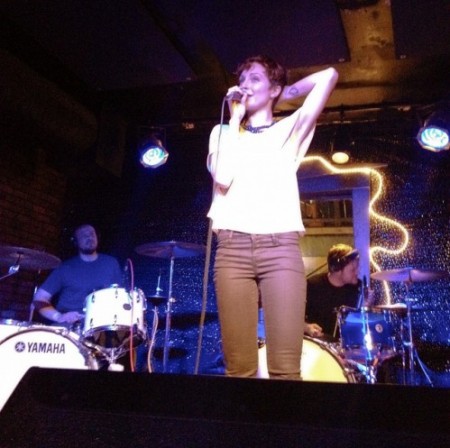 After an impressive performance from Waves, a dance-inducing funk-flavored rock band from San Francisco whose cover of Michael Jackson‘s “PYT” expanded the small venue, Poliça began to prepare its instruments. Off stage, Channy is quiet and somewhat elf-like in her movements, sauntering across the patio and up the back stairs into a private room a number of times. As expected, as soon as she had a mic in hand her eyes defrosted and she gave off an infectious energy. With two drummers, a bassist and Channy with a microphone and pedals, the band began to stir the room with its heavily auto-tuned music.

Watching and hearing Poliça live is a completely different experience than listening to them on speakers. Witnessing Chris Bierden’s hands fly over his bass, the dual drummers keeping a single beat, and Channy literally using her voice as an instrument, contorting her body with changes of pitch and pace, is like seeing layers of color being laid down one by one until a painting is complete. The process is mesmerizing, and the repetition in the group’s lyrics is equally hypnotic. Songs like “Happy Be Fine” and “Violent Games,” with lyrics that walk in circles, were a demonstration of how Channy’s vocal performance fills in the sound space as a guitar would, carrying melodies with repetitive riffs and flourishes of licks. 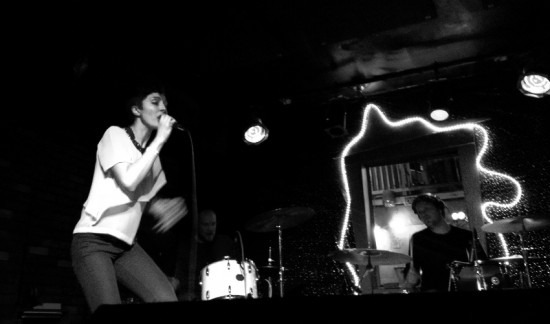 When the opening beat of “Dark Star” escaped into the venue, the lyrics unfolded and painted a warm picture of a mother and daughter. The song, a personal favorite of mine, moved the audience along with the smooth contours of Channy’s voice. The crowd’s energy was undeniably affectionate and the band seemed to notice. Near the end of the set, Channy proclaimed, “We’ve played three shows in San Francisco, and this is the best one.”

Despite releasing Poliça’s debut album, Give You the Ghost, less than a week prior to the show, the band pleased the crowd by announcing it had new material for the encore. The new songs highlighted the insane rhythm of drummers Ben Ivascu and Drew Christopherson. Following a hushed moment while Channy stepped to the side of the stage, Ben and Drew let loose intricate patterns of sharp, rim-tapping and cross-sticking beats. The effect was crowd-silencing.

Poliça left the stage with humble smiles and stuck around to chat with fans, sign vinyls and take a few quick pictures. After thanking the band members and wishing them luck on the remainder of the tour, I found myself feeling lucky to have caught this act in the phase right before it blows up. Poliça’s indie electronic/R&B music won’t stay a secret for long, and I have a feeling the band will be playing bigger venues and shows in the near future. (Sasquatch! Music Festival, anyone??)

Bottom of the Hill Polica