Last year I went to South by Southwest in Austin, Texas. Over the course of nine days I ate a lot of amazing barbecue, drank an unhealthy amount of free booze, saw some great music, sat in on some interesting panels and witnessed a bunch of people acting like giant douches.

Whether it was folks being pushy in conversation, squeezing by in a crowded area without saying “excuse me,” drunkenly stealing orders from food trucks, going on about how SXSW has grown too corporate or simply getting annoyingly drunk—people were acting really douchey.

Granted, it’s difficult to maintain a high level of moral fortitude when you’ve been throwing back free cocktails all day, but I was astounded by the absence of common manners and lack of respect for fellow human beings that I witnessed during my time in Austin. 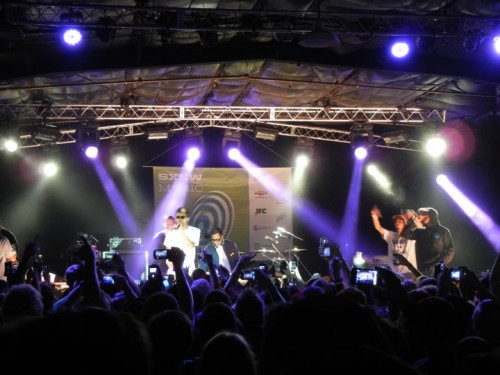 Primarily split into two halves, SXSW is a festival of dichotomies: the first portion being a tech-centered conference and the second a music festival (there’s apparently a film portion, but no one really seems to pay attention to it). Because of this fissure, the crowds differ greatly. During the first half, there’s an influx of business types who are trying to spread the word on the latest product, app or website their company is launching at SXSW. The second half is full of hipster types with skinny jeans, oversized sunglasses and stupid haircuts. Both groups, however different as they may be, can be equally douchey.

In an attempt to help attendees of this year’s SXSW, I’ve compiled a list of helpful points to avoid as much douchebaggery as possible.

I really can’t stress this enough—don’t drink to excess. Yes, consuming libations is one of life’s great pleasures and when drinks are free, they’re easy to throw back. But watch yourself, the first half of SXSW is pretty much an exclusive industry event and a lot of people—maybe even you—are sent there for work. After one too many margaritas, you might find yourself inadvertently insulting someone in an extremely distasteful manner, resulting in people, possibly some you want to do future business with, to perceive you as a drunken lush. 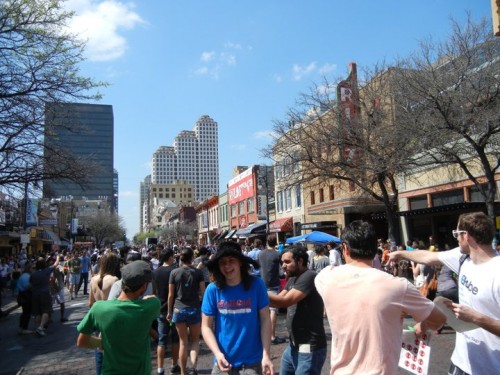 Know Your Place and Don’t Infringe

During the conference portion of SXSW, many get overtly chatty in an extremely annoying fashion in an attempt to mask their sales pitch. Do everyone a favor and drop the façade. If you linger and cling to someone, you’re not going to impress them. If you are trying to network for business purposes, don’t glob on to someone in an attempt to market yourself or your company.

Learn How To Wait In Line

Don’t think you’re special or are deserving of privilege—wait in like everyone else does. Yes, it sucks, but don’t gripe about it. Stand in the stupid line like an adult—with dignity and patience. It’ll be done before you know it. If you see a giant line out in front of a venue or club you want to get into, don’t go to the front of it and try and plead your way in. This will only upset the bouncer and the folks who are dutifully waiting line. Suck it up, go to the end and wait your turn

If you’ve been to this festival in the past, cool, good for you, please don’t wax laconically about it. The festival, as it now stands, is a hot bed for corporate sponsorship and old money capitalists are definitely seeking to reap the benefits of a younger, tech savvy generation. Was SXSW cooler when there weren’t commercial sponsors for every party and showcase? Most likely. But is there anything that can be done about the impeding business aspect that helps keep SXSW running? Apart from complaining about it, no, nothing really. 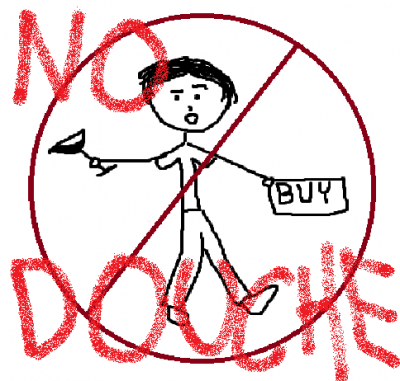 Hopefully, this short list will help individuals remain as undouchey as possible and give some semblance of civility to an otherwise ornery gathering of people. Acting undouchey might seem simple, but that doesn’t mean it’s easy. When you’re in the midst of SXSW, it’s important to keep your wits about you and not indulge in asshole tendencies. If you’re not careful, the person that’ll prompt people to shake their heads in disgust and mutter, “Geez, what a douche” might just be you.

Now that you have an idea of how not to act like a douche at South by Southwest, be sure to check out our tips on making it through this year’s festival in our SXSW 2012 Survival Guide.