Rineke Dijkstra: A Retrospective | until May 28 | SFMOMA | San Francisco

As famed art critic Boris Groys persuasively argues in his book Art Power, the museum nowadays is a place “where we can learn to resist the dictatorship of contemporary taste.” That is, the museum offers us something that counters the image of the world as provided to us by the mass media. One way to accomplish this is to present what the mass media occludes. Since television, advertising, cinema, etc. tend to favor the spectacular, the out-of-the-ordinary, many artists choose to challenge the mass media’s representational norms by picturing the everyday, the prosaic, the absolutely-not-special. Rineke Dijkstra is one such practitioner: her most well-known photographs and videos feature teenagers who could have very well been your classmates. 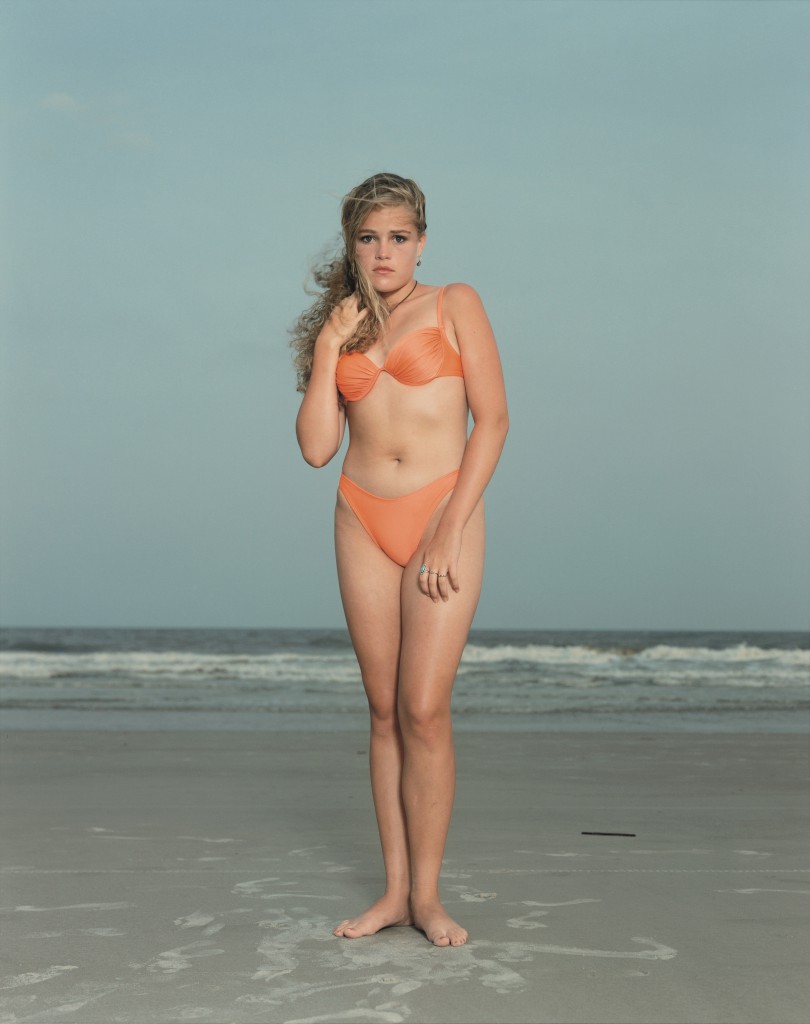 Dijkstra specializes in portraiture; her photographs are typically done in color and are very large, which imparts on them the grandeur of classical painting. Nevertheless, she takes some cues also from Conceptual photography, which emphatically sought to be not like painting–the practice of painting had been tainted by the market-friendly myth of the solitary, autonomous masterpiece. If you take any photograph by Dijkstra that is shown at the current SFMOMA retrospective, you will find that most probably it is not autonomous, as it is part of a series, and to understand it properly you need to read the explanation. Furthermore, while working on a series she creates a set of rigid rules which ultimately determine the “look” of the whole set.

The SFMOMA exhibition includes images from photographic series dedicated to kids on the beach, kids in public parks, and young soldiers in military and civilian attire, as well as kids whose way towards adulthood was documented over time, with Dijkstra checking up on them every year or two. There are also two multi-channel videos in which teenagers dance to club and popular music in a brightly lit room with white walls. Very rare are the instances where there is more than one person per picture or per screen: the artist seems to want us to confront each person separately before moving on to the next one. The majority of the kids are white, seemingly of lower-middle-class or working-class background. There are no ostentatious street fashion displays that are the food of so much Tumblrs: some outfits are flashier than others, but all in all, the boys and girls’ clothes are fairly ordinary. 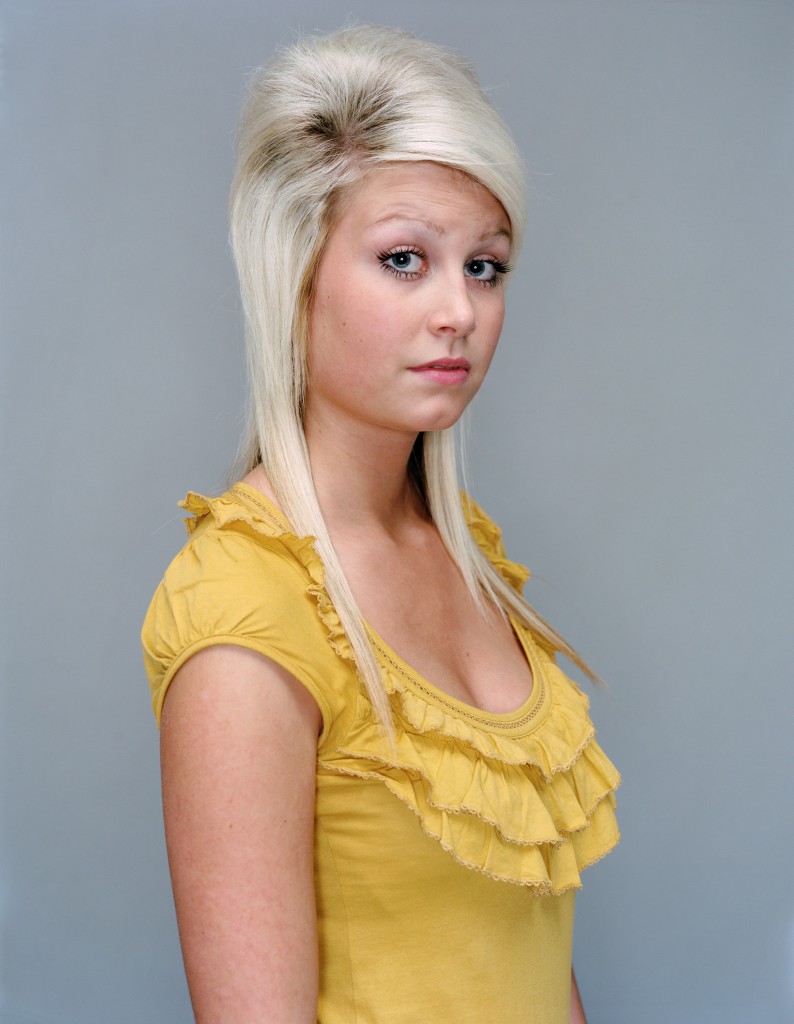 A major theme in this body of work of Dijkstra’s is self-presentation, how people perform themselves in society. A “personality” is created through “individual” style in clothes and accessories as well as make-up and signifiers of “coolness” such as a cigarette in hand. When I think of other contemporary artworks that deal with “everyday performance,” what invariably comes to mind is Katy Grannan‘s photographs, especially her series Boulevard, featuring people whose appearance truly defies all conventions (I mean aging Marilyn Monroe impersonators, not your Suicide Girls). Dijkstra’s adolescents, on the other hand, seem to not block established cultural codes, but unconsciously let those codes speak through them. 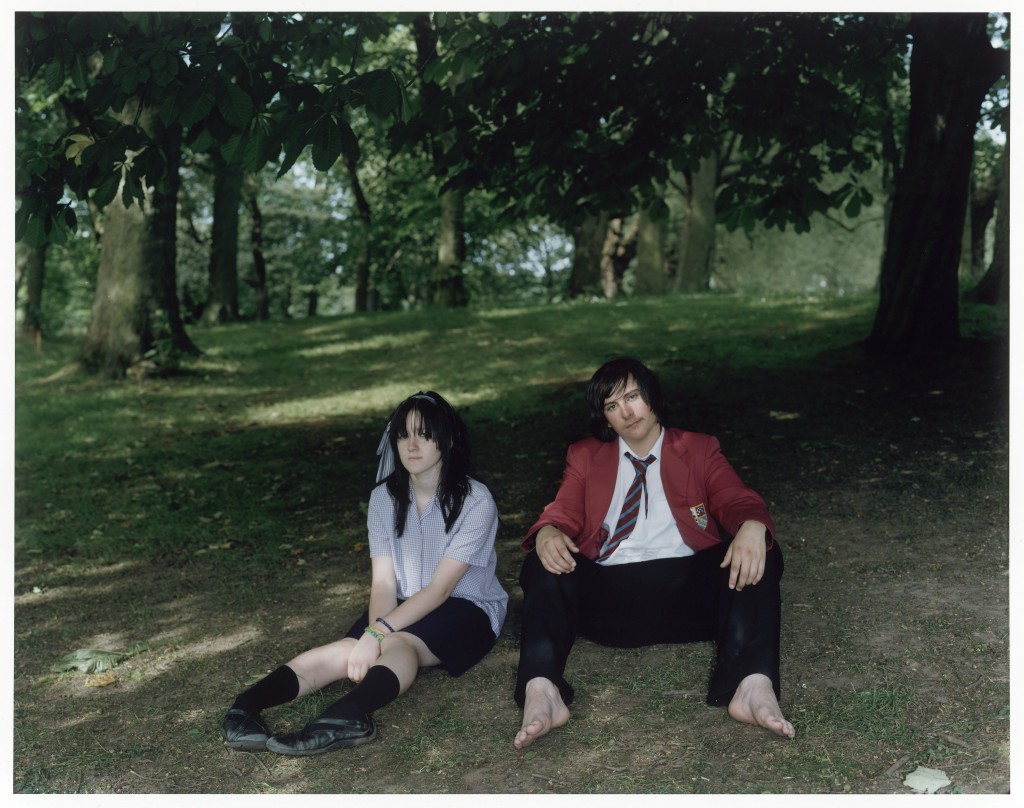 But see, “ordinariness” is not a concept that should be taken uncritically. The globalization of fashion, as well as the packaging of the whole range of experiences of youth into “youth culture” and the slicing of said “youth culture” into various “styles” that a kid can choose from is a result of specific political and economic developments. This can play tricks with the beholder’s mind, preventing complex understanding of another person and, ultimately, respect. When I looked at a sullen young man with a shaved head in one of Dijkstra’s videos, The Buzz Club/ Mysteryworld (1996-97), I tried to guess his story, and all kinds of myths were rushing through my head. Was he a skinhead? Or a future anti-globalist? Or a petty criminal who has problems with the police, that’s why his face is so sad? Or a young poet? Or just a guy who came to the club to meet his friends and have fun? In other words, you think you’re going to crack that kid open like a nut, but instead you end up a fool whose head is riddled with stereotypes.

One of the strengths of Dijkstra’s art is that it prompts reflection on the public and the private. We live in a culture where constantly being “on view” and marketing oneself is a prerequisite for social and career success. Moreover, this culture favors such entertainment forms as TV series, multi-novel literary sagas, and movies with millions of sequels that allow viewers to fully grasp the lives of their favorite characters. Dijkstra’s practice counters this by withholding information. Ultimately, each of Dijkstra’s teenagers is an enigma, an impenetrable wall against which all stereotypes shatter: yes, we can make guesses based on their outfits and comportment, but it’s all extremely indeterminate. The backgrounds are neutral, the subjects’ standing among peers is unclear (is that a class queen bee, or an outcast?), they are in control of their emotions and how they present themselves. In short, Dijkstra doesn’t go far enough so as to let viewers indulge in voyeuristic tendencies, or make judgments, or use her images to romanticize and mythologize youth. I remember seeing (in an auction catalogue) a set of Richard Prince photographs of women with their backs turned to the camera; the accompanying text stated that the work speaks of a refusal to expose and market oneself. Unlike Prince’s women, Dijkstra’s teenagers confront the viewer head-on, refusing to dissolve into abstractions. Her photographs do not say that self-presentation has to be avoided, but, without revealing much, they point to the complexity of individualities and experiences. One of the most wonderful features of Dijkstra’s work with teenagers is her respectful distance.

This mini essay dealt exclusively with Dijkstra’s youth-themed pieces, but the SFMOMA retrospective also has works from seminal photo series dedicated to such subjects as bullfighters and new mothers. Overall, there are 70 photographs and five video installations. This retrospective is not to be missed by anyone interested in contemporary art.