American-born, Paris-based Saul Williams is a multitasking artist: he writes and performs poetry, acts in films, and makes music. On March 10th he presented his fourth album, Volcanic Sunlight, at Slim’s in San Francisco. Amping up the crowd before the main act was CX Kidtronik, a member of Saul’s touring band as well as the cult “digital hardcore” outfit Atari Teenage Riot. His energetic, schizophrenic DJ set combined everything from punk and hip hop to Van Halen, and ended with a breakcore number followed by songs from Star Wars and Muppets. 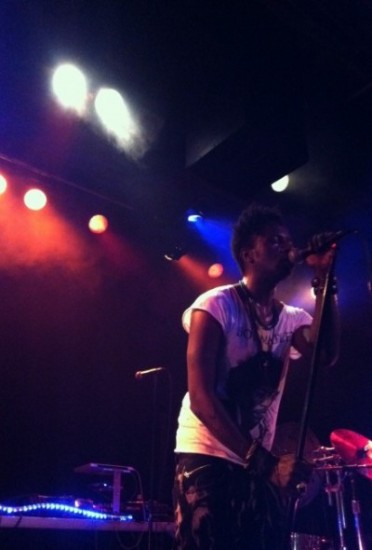 Kidtronik’s surprising choice of tracks to play was appropriate for the event, since Williams’ work itself is stylistically promiscuous. He often gets tucked into the “alternative hip hop” genre, but Volcanic Sunlight is his “indie pop” effort, with influences from all over the place (alt. rock, funk, electronic dance music) and more singing than spoken word.

While Williams is far from the most technical singer ever, he wins over the audience with his rare charisma, passion, and conviction. Donning an ironic Jimi Hendrix T-shirt with the words “Bob Marley” on it, he screamed and spewed his words like a punk rock star, singing about love of life (a major topic on his latest album) like he would about revolution. Such album tracks as “Patience” and “Explain My Heart” were especially ferocious live, with Williams complementing his drummers’ work by beating an unusual square hand drum. At one point he urged us to dance like nobody was watching, as if we were at home, because the show was for us to set ourselves free, not to look at him (“You can watch me on YouTube and shit.”) “Be free,” he said. Amen.

I have to say, Saul Williams’ Bay Area fan base is very dedicated. I saw a lot of people mouthing every single word of the new songs (a rare sight for concerts I go to). By the stage there was some kind of a mosh pit, even, to which Williams descended once. When he was reciting his poems at the end of the performance, there were people in the audience who remembered the words better than he did! A fan even gave Williams a copy of Williams’ own poetry collection, She, over which the fan had scribbled his own original works–Williams asked the guy to read one to the crowd. A great thing about Williams is that he seems to be very open to other people’s ideas, and he prides himself on not living in a solipsistic bubble.

Saul Williams will be on tour in North America until March 24. Check out the artist’s eventseekr page to see the exact dates.