In one of her famous feminist collages Barbara Kruger fulminated against the hypocrisy of male-dominated culture: “You construct intricate rituals which allow you to touch the skin of other men.” That phrase came to mind when I was watching Cut-Out Guy, a new work by the ODC Dance collective, which premiered at the Yerba Buena Center for the Arts on March 16. The piece, featuring an all-male cast of five, brings attention to what is still a mainstream media taboo: physical interactions between men that go beyond these “intricate rituals.”

Fighting can, of course, be considered such a ritual. Some martial arts, or elements of them, can be perceived as a kind of intimate interaction. KT Nelson, who choreographed the work, claims it was inspired by her own experience with wrestlers (her son was in the sport). She was fascinated by the contrast between the martial art’s apparent virility and the vulnerability that it grants the fighters. In her piece, the dancers’ interactions oscillate between aggression and affection. A dancer may shove another or throw himself at him, or hold and carry him. Adding more drama to Cut-Out Guy is the soundtrack, consisting of several abrasive, noisy pieces by Australian-born composer Ben Frost. The work ends ominously, with Frost-sampled sounds of howling wolves and the dancers muttering unintelligibly in unison. 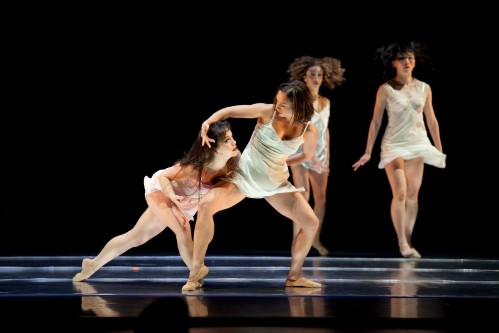 Apart from Cut-Out Guy, the current ODC season has two more premieres: Transit, also by KT Nelson, and Breathing Underwater, by company founder Brenda Way. The latter offers a “girly” counterpart to Cut-Out Guy, in that it features only female dancers and is set to music by a female composer, maverick San Francisco cellist Zoë Keating (who performs live at the shows). According to Way, the piece focuses on the emotional relationships between women and the way those emotions affect behavior in a constraining culture. The dancers deftly mimic self-absorbed and catty behavior (at one point a dancer is “cast off” from the group) as well as supportive behavior. While the dancers’ acrobatic prowess, agility and wide-ranging repertoire of movements are simply stunning, Breathing Underwater made less of an emotional impact on me than Cut-Out Guy. I think that is because Way’s work had less in terms of raw affection among the dancers’ “characters.” But overall, both the “male” and “female” pieces seem to be two sides of the same coin, since they both concern how competition affects gender groups. In “boy culture,” it devalues tenderness towards members of the same sex, and in “girl culture” it encourages mistrust. 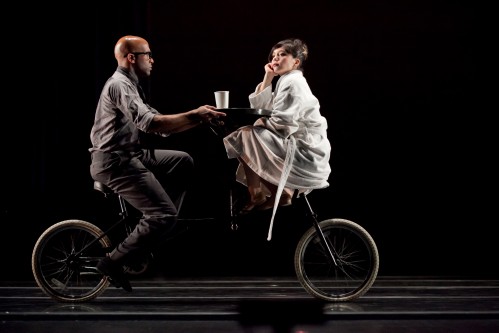 Transit, in which all of the ODC’s ten dancers took part, is more lightweight in its themes. Set to a whimsical score by Nico Muhly, it follows the everyday dramas of several big city dwellers: a family with kids, a gay couple, two hetero couples, and two girls. The characters run around town, flirt, argue, take the public transport, and ride Max Chen’s extraordinary bikes, which can double as tables or benches. Nelson stresses that her dance is a tribute to urban life, and Transit indeed seems to call for the real exploration of the city, instead of just a perception of it as a mindless backdrop to an iPhone screen.

All of the three new works can be seen at the YBCA’s Novellus Theater until March 25. Before you buy tickets, make sure you get the program you want. Program 1 includes Breathing Underwater, Transit, and a spectacular 1999 work called Raking Light. Program 2 has Cut-Out Guy as well as two older dances, I look vacantly at the pacific…though regret and Part of a Longer Story. You can check the detailed schedule here.