The Mezzanine show on April 6 was the third time I saw the hip-hop duo dead prez. The first time was at a “solar-powered hip-hop concert” at the Yerba Buena Gardens, where a young man gave me a Communist party pamphlet during the show. That was no coincidence, since the name dead prez is synonymous with politicized hip-hop (as the guys themselves say, “revolutionary but gangsta”). Both members, M-1 and stic.man, have been involved in community organizing since their teens, and they subscribe to socialist views. In December dead prez performed at Occupy D.C.; currently they are working on a Trayvon Martin tribute (with Mos Def, no less). 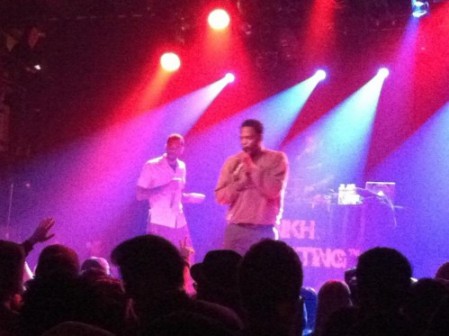 A snippet of that tribute was performed by M-1 at the Mezzanine concert, but the song is still in its raw state, and he even forgot some of the words. The bulk of the show consisted of old favorites from dead prez’s breakthrough albums from the early 2000s, such as “Hell Yeah,” “I’m a African,” and of course the oeuvre majeure, “It’s Bigger Than Hip Hop,” which drove the audience into a frenzy. Another highlight was stic.man machine-gun rapping about intense physical exercise over a brutal beat. Some context is needed here: M-1 and stic.man are proponents of what could be called “straight edge” hip-hop, promoting sobriety, veganism, and fitness. The latter is the theme of stic’s 2011 solo effort, The Workout (the aforementioned cut was taken from it). Why such focus? As stic.man explained to the audience, physical strength and health are needed to protect yourself and your community from the violence of the state’s repressive instruments (i.e. the police and the military). dead prez is well-known for its anti-police stance: at previous shows the two incited the audience to chant “Fuck the police,” and the number one commandment in their “Revolutionary but Gangsta” code (as seen here) is “No snitching… Snitching helps the pigs, and when you help the pigs you’re hurting the people.” The second commandment goes, “Protect Self, Family, and Community at all times. All we have is each other. Be prepared for self-defense 24-7.”

It’s clear that the dead prez guys’ ego ideal is not just an intellectual (in an interview M-1 argues for a “scientific understanding” of capitalism) but also a warrior. However, when stic.man encouraged the San Francisco audience to yell “Discipline!” with him, he got a lukewarm reaction at best, even though the audience had been enthusiastic at raising their fists earlier and gladly chanted “Trayvon” later. dead prez’s emphasis on hardline discipline is a somewhat controversial point in the duo’s rhetoric, as is their apparent support of gun use. Not all left-wingers will agree with their proposed methods, however it is valid to have such no-bullshit voices tackling pressing problems like police brutality and poverty in such a contagious, memorable form. It will be interesting to see where dead prez will go next.