In the immediate days following Coachella weekend one, post-festival depression set in, and I found myself envious of Coachella weekend two-ers for the first time since I learned the festival would be split into two consecutive weekends. Just as weekend two attendees began their Coachella journey, weekend one attendees and I began to cling to our own memories of the desert and endless music. Slowly but surely, however, the world becomes brighter as I fully digest the magic of my Coachella 2012 experience. 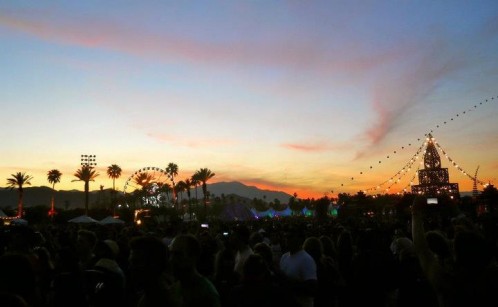 Despite promising myself I would be on the festival grounds for Other Lives’ 2:05pm set, my 70-piece group and I barely made it to the Outdoor Theatre in time to catch Neon Indian at 4:25. As the first show of the festival, Neon Indian’s performance could have consisted of the banging together of pots and pans and I would have dug it, so to describe its set as magical doesn’t say much. The band’s rendition of “Arcade Blues” made me forget the partly cloudy sky and it made me zone in on the fact that the weekend had started. The track’s light buzzing sounds moved the audience in a calm but meaningful manner, and even though it was too bright for the light show to really matter, I could see the majority of the festival grounds begin to light up.

Following a quick beer garden stop, I made my way to the Sahara tent for Madeon. I had never witnessed the young dance music guru perform before, but his live edition of “Pop Culture” has put an end to my aversion to mashups. Though the 17-year-old’s ridiculous light show put me in an EDM mindset for most of the night, I made my way over to the Coachella main stage to catch Pulp. The minute Pulp took the stage, front man Jarvis Cocker held my attention with his witty banter and quirky British humor. The band brought the 1990s back to life (a fitting resurrection given that the crowd was dressed in studded jean clothing and floor-length floral dresses), and its encore of “Common People” drove the audience into a crazed sing-a-long.

Afterward, I walked a zig-zagged pattern to the Sahara tent for Afrojack, then back to the main stage for The Black Keys. I caught the blues-rock duo’s opener of “Howlin’ for You,” which set off a string of actual howls from the audience, followed by amped up versions of “Next Girl” and “Same Old Thing” before heading back to the tents to catch M83 at the Mojave tent. The indie-electronic act could have been ten notches louder, but I’ll blame that on technical problems. M83’s “We Own The Sky” was a definite crowd favorite, but not more so than its remix of Daft Punk’s “Fall.” This was absolutely the next best thing to having the iconic French-house music producers there in person, because M83 did justice to the track’s spine-melting reverberations.

I labeled Amon Tobin a “must see” based on his solo shows in venues that made his designer set into the towering structure it should have been. But cooped up in the Mojave tent, his usually massive cubic set was dwarfed down to a miniature version of itself. Thus, I have to admit— the effect was not nearly as mind altering as I was expecting. So I left about five minutes into his set in favor of Datsik in the Sahara tent, where I got the visual experience I was hoping for. The robot graphics on screen came to life as it gave the effect that it was shaking the audience with its hands, and when two larger-than-life robots actually came onstage, the lines between 2D and 3D graphics began to blur into one amazing audio/visual experience.

I finished out day one with Swedish House Mafia only by default, since it was the closing act of the night, and I was surprised by how much fun it was. With a fog machine, multi-colored laser beams and what seemed like multi-colored strobe lights, the group’s light show was hands down the best of the night. The three-piece DJ group topped its set off by setting off fireworks and literally setting the main stage on fire. It was the perfect way to end day one. 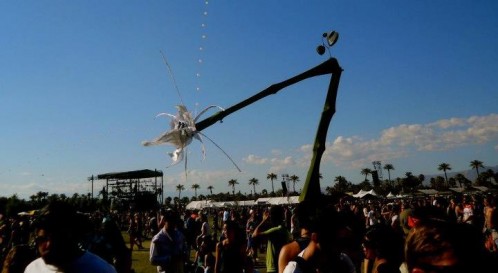 Saturday was the day I had been waiting for for the better half of the last decade. As the anticipation built for Radiohead’s headlining performance, the afternoon flew by at the Outdoor Theatre with tUnE-yArDs, Andrew Bird and then Jeff Mangum. Those sets were mellow follow-ups to the Friday night electronic dance party and a welcome change of pace. I ushered my night in with St. Vincent’s set in the Gobi tent, and I couldn’t have asked for a better way to do so than with Annie Erin Clark’s badass vocals and killer guitar shredding skills. Honestly, I was blown away by the juxtaposition of St. Vincent’s hypnotic synthy sounds and smashing electric guitar.

Directly after St. Vincent came the experimental music of Flying Lotus. Already distracted by the thought of Radiohead’s set only hours away, I nearly lost my mind when Flying Lotus mastermind Steven Ellison sampled “Idioteque.” After this teaser, I had ears for one band and one band only.

As I made my way to the main stage to snag a spot for Radiohead, I finally took the time to digest my surroundings. The lit up palm trees, ferris wheel, traveling land sharks, and the noise from the Do Lab hit me like a ton of bricks. For the first time that weekend, I was rendered silent by a mixture of joy, anticipation and the slight anxiety that goes along with seeing my favorite band in one of the best settings imaginable.

Bon Iver acted as a soundtrack to my otherwise silent walk to the front of the main stage, Justin Vernon’s voice literally pulling me as forward as I could go. My nerves were calmed with Bon Iver’s sweet rendition of “Skinny Love,” and the rest of the set was characterized by Vernon’s falsetto voice, particularly during “Calgary.” The minute Bon Iver left the stage there was a rush forward as hundreds of Radiohead fans fought for prime locations. I settled in about 15 yards from the front of the stage, somewhere in the middle left of the audience. Satisfied with my location, I counted down every second of the 40 minute wait until Radiohead took the stage.

With a fully lit up backdrop behind sixteen separated panels displaying live (or recently live) footage of the band, Radiohead’s stage set-up made for a full bodied, almost psychedelic experience. Radiohead opened with “Bloom,” and from there played a nice mixture of old and new material. Some of my favorite moments came off of In Rainbows, such as “15 Step” and “Weird Fishes” (some of my favorite Radiohead songs) though I would have loved to hear more off of The Bends.

I had seen Thom Yorke perform live once with Atoms For Peace at Coachella in 2010, and he was just as funky and just as charming as I remembered him. With long hair pulled back in a pony tail, he sauntered back and forth on the stage, playing with the audience more than for the audience. Thom, Jonny, Colin, Ed, and Phil are undoubted Coachella veterans, and they all moved with ease and unpracticed precision.

About halfway through the band’s set, it struck the opening chords of “Karma Police” and the audience exploded with cheers before joining in on the loudest sing-a-long of the weekend. The crowd was treated to a gorgeous version of “There, There,” and as if prophesied by Flying Lotus, “Idioteque,” just before the first encore. Radiohead played a prolonged version of “Everything In its Right Place” before exiting the stage again, leaving the audience with its usual final song of choice. However, the band came on stage one more time and brought it down a notch with “Give Up the Ghost,” and then finally ended with “Paranoid Android.” I don’t know what it means that Radiohead closed with my favorite song off of my all time favorite album, OK Computer, but I know I’ll be thinking about this show until I get to see them again. 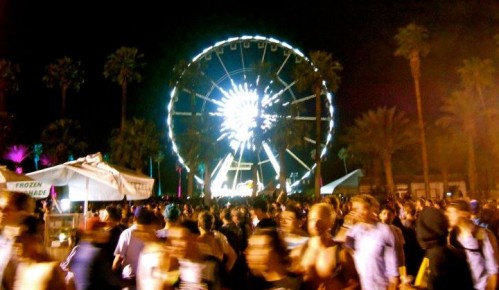 After eating what felt like my first meal in days, I finally made it to the grounds at about 6 pm. As I walked past the main stage where The Hives were playing, I decided to skip out on the garage rock act in favor of The Weeknd. The smooth R&B was a nice change of pace, but it also necessitated a beer garden run for a quick pick me up. The Heineken Beer Garden was always a nice way to take a break from crowds, but it seemed like everyone had the same idea on Sunday. It took an unprecedented fifteen minutes to walk into the garden because of the ridiculous crowd of people. Once I got inside and refreshed myself with a cold, nine-dollar beer, my friends and I booked it to the main stage to catch Justice.

Despite coming on late and only playing for about half an hour, Justice ended up being one of my favorite sets. Playing all of its best songs from its album †, particularly “Genesis” to the crowd’s pleasure, Justice made me feel like it was day one all over again. It pumped enough energy in me to get me re-amped for the closing act of Dr. Dre and Snoop Dogg.

I caught a sliver of Beirut and then At the Drive-In from the beer garden with a burger and fries, resting my voice and getting my legs back under me before heading to the main stage for the last hoorah. By the last song, there was not a hand in the audience that wasn’t swaying back and forth. As expected, Dr. Dre and Snoop’s set was an outrageous showing of talent, with guest appearances by Kendrick Lamar, Wiz Khalifa, 50 Cent and my favorite guest appearance of the weekend, Eminem. I saw performances of songs I never, ever imagined I would have seen live, such as “Gin and Juice,” and Dre and 2pac’s “California Love.” Speaking of the late, great 2Pac, he made an appearance in hologram form. Watching the hologram of 2pac rap “2 of America’s Most Wanted” side by side with Snoop was a bizarre and somewhat creepy experience. However, regardless of what anyone says about the ethics behind reproducing a hologram of a deceased artist for a cash cow like Coachella, it was undoubtedly amazing and surreal to experience it live.

I am just starting to take in how truly magical Coachella 2012 was, and feel extremely lucky to have witnessed the music and aura of what seems like the largest music festival on the West Coast. This year will go down in the books as one of the best musical weekends of my life. It went by in a flash and I’m now left pining for the down time spent in the beer garden, or those moments of anticipation waiting to see a band go onstage, or even that moment near the end of the night when it felt like I couldn’t possibly party anymore. For those who are in the same boat as I’m in… Coachella 2013 is only a year away.